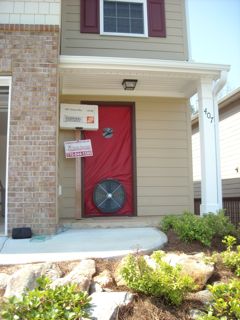 The first bit of sleuthing you may need to do here is to figure out what the heck a DET verifier is. Well, we have a new energy code here in Georgia, and the requirement that all new homes (and extensive renovations) be tested for duct leakage and infiltration rate kicked in on 1 July. The task force that put together the new code created a new certification for people who’ve been trained on Blower Door and duct leakage testing and called them Duct and Envelope Tightness (DET) Verifiers.

The first bit of sleuthing you may need to do here is to figure out what the heck a DET verifier is. Well, we have a new energy code here in Georgia, and the requirement that all new homes (and extensive renovations) be tested for duct leakage and infiltration rate kicked in on 1 July. The task force that put together the new code created a new certification for people who’ve been trained on Blower Door and duct leakage testing and called them Duct and Envelope Tightness (DET) Verifiers.

Although this term applies only in Georgia, the 2009 International Energy Conservation Code (IECC) requires all new homes to pass either a visual inspection for duct and envelope tightness or performance testing. Our state (he said, puffing up his chest) just happens to be the only one so far that said the visual inspection isn’t adequate. [Correction: Washington state also requires Blower Door testing for all new homes. Thanks to Scott Wood for pointing this out to me. I’m still proud of Georgia; Washington is one of my former home states and a great place.]

Anyway, air barrier sleuthing is as useful in remodeling older homes as it is in helping builders meet the requirements of new energy codes. If you’re a HERS rater, BPI building analyst, DET verifier, or even an energy auditor with one of those – how shall I say it? – less rigorous ‘certifications,’ you need to know how to go into a house and find the holes. So today I present you with three different holes in the air barrier, one common and two that are rather unusual. First, the common one is visible in the photo above. This house has a basement with a mechanical room that is outside the envelope. Because the house had an atmospheric combustion furnace, the building code required high-low vents to bring in combustion air. There was also insulation in the wall separating the mechanical room from the finished basement on the other side of the wall.

The joists running across that wall, however, were almost completely unsealed. You can see that someone shot a tiny bit of spray foam at the bottom of that one duct, but the rest is open enough to make a superhighway for whole families of possums or rats, not to mention air. Once ducts go in like that and the house is finished, that room is nigh impossible to seal properly. As I said, this is a common air leakage problem in a lot of homes and can easily cause houses to fail the Blower Door test. The first of the unusual holes was this one I saw in a house a few years ago. The builder was going for certification in the EarthCraft House program and ENERGY STAR, but as you can see, they made a little mistake in the building envelope. You don’t put a gable vent through a wall into a finished room.

In this case, the builder was aware of the problem and said that it was supposed to be a false gable vent. The framers put in the wrong one, though, and if it hadn’t been caught, could have caused them to fail the Blower Door test. Even if they put drywall over the vent, they’d still probably get a lot of leakage. Here’s my favorite air barrier hole of all time! See those crawl space vents in the house above? You might think there’s nothing out of the ordinary here. It looks like a typical house on a vented crawl space.

Appearances can be deceiving, though, and in this case they were. There’s actually finished basement on the other side of that wall, and those vents were open into the space above the drop ceiling in the basement. The homeowners here basically had open windows into their basement year-round. By sealing those holes and a few others, I was able to reduce their air leakage by 40%.

When you’re trying to find – or prevent – air leaks from getting into the building envelope, you have to look at the house carefully. Learning to see exactly where the building envelope is, or should be, takes understanding, skill, and experience. You can often track them down with the Blower Door running, but by the time the house is ready for testing, the fixes can be difficult and expensive.

You can also take our HERS rater class to learn more about building science and pressure testing. Certified HERS raters automatically qualify as DET Verifiers.