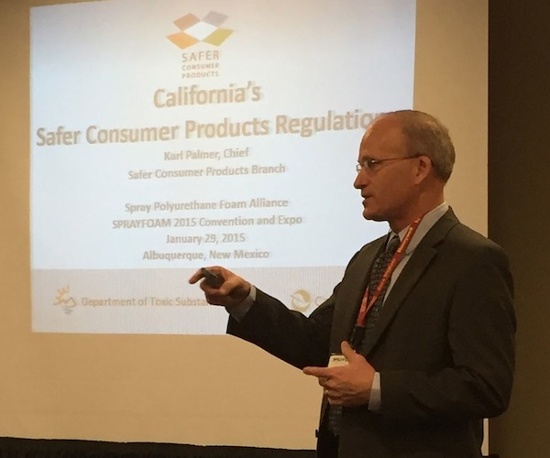 I’ll distill this issue down as much as I can because it’s easy to get confused if you dive in and try to figure it all out. First, the Green Chemistry Initiative, also called the Green Chemistry Law, contains six recommendations. (Karl Palmer,1 an administrator at the California Department of Toxic Substances Control who’s pictured above, specified the California Assembly bill numbers as AB 1879/SB 509.)

Here’s how it works:

The DTSC identifies products that use those chemicals and singles out any that they believe should be scrutinized further. These are called Priority Products. In March 2014, after six years of trying to implement Green Chemistry Initiative recommendation #5, they finally announced the first three Priority Products:

The DTSC writes a Priority Product Profile for each one, giving the scientific reasoning behind its inclusion on the list.

The “responsible entities” for a Priority Product must then do an Alternatives Analysis to see what they might be able to do to make their product safer.

California then decides what regulations to impose on Priority Products.

The acronym and initials soup

I’ve already given three of them above, but there are plenty more acronyms and initials that you’re likely to run across when you start reading about this. Here are the main ones I’ve seen bandied about:

At this point, California is still on step 2. They’ve identified the first three Priority Products and written profiles on them. The one I’m interested in is spray polyurethane foam insulation, and the DTSC released the initial profile on 13 March 2014.

I say “initial profile” because six months later they released a revised version of the SPF Priority Product Profile (pdf). And when I say revised, I mean seriously marked up and changed. Why? Because it was full of mistakes.

The two biggest mistakes, which could be considered fatal flaws, are:

If you download and read the revised report (pdf), you’ll see what I mean. The 30 page report probably wouldn’t even be 20 pages with all the strikeouts removed, and they’ve toned the language way down.

For example, where it used to say:

“Diisocyanate exposures have been the leading attributable cause of work-related asthma” (emphasis added);

“Diisocyanate exposures have been a leading attributable cause of work-related asthma.” (emphasis added)

But even the revised report is misleading. Take a look at the health studies they still cite and you’ll see that a lot of the documented negative health effects don’t apply to spray foam but to spray paint and spray-on truck bed liners.

Is MDI a hazard?

Are the unreacted diisocyanates from spray foam hazardous? Yes. No one questions that. The SPF industry, however, has gotten much better about not putting its workers at risk. Nearly all installers now wear appropriate personal protective equipment, including respirators with air pumped in from outdoors. Gone are the days when an installer would spend hours in an attic or crawl space with only a dust mask.

I’ll write more about this issue in a future article, but the way I understand it, unreacted MDI is a short-term problem. Most people I’ve talked to say that 24 hours after spraying, there’s next to none of it left in the environment. The hazards of spray foam exist mainly during the installation and in the hours afterward.

Paul Duffy of Icynene, at one of the DTSC workshops mentioned in the next section, cited a research study of freshly sprayed or recently cut SPF and said, “What we found in that work was we could not find unreacted isocyanates five minutes after spray. Five minutes.”

The better question to ask, however, is how much risk does spray foam present? Rick Duncan, PhD, PE, Technical Director of the Spray Polyurethane Foam Alliance, told me that the California DTSC is reacting to hazard rather than risk. Yes, it’s a hazardous substance, but the risk has a short life and is well managed.

When the DTSC announced that spray foam was one of the first three Priority Products to be listed and released its profile report, the reaction was swift and strong. The DTSC held three public workshops to take comments on the Priority Product Profile of SPF. If you have time and want to dive in deeply, you can read the transcripts, available on the DTSC website:

The spray foam industry was well represented at these meetings and gave the DTSC crew, including Karl Palmer and Dr. Dennis Guo, a research scientist with the DTSC, an earful. Paul Duffy of Icynene has some great comments in the 7 May transcript.

In addition, the industry trade association, the Spray Polyurethane Foam Alliance (SPFA), and the American Chemistry Council (ACC) have weighed in. They’ve submitted documents and letters to the DTSC and have even asked to have SPF taken of the Priority Product list.

I also received a copy of a letter that three California Assemblymen (Jim Patterson, Adam Gray, and Donald Wagner) sent to the director of the DTSC last December. In it, they wrote:

“While ensuring that products created and sold for use in California are safe for consumer use is an important goal, the Department did not adhere strongly to its own statutory mandate and regulations regarding industry consultation and duplicative regulations in this process, and ultimately caused undue harm to the spray foam industry.”

I wasn’t at those hearings but did get to attend Karl Palmer’s presentation at the SPFA conference in Albuquerque earlier this year. (That’s where I took the photo above.) In his presentation, he laid out the story, telling what’s happened so far, how we got here, and what the next steps are.

“No, we’re not saying spray foam isn’t safe,” he said in response to a question during the talk. “We’ve made some mistakes and we’re learning.”

Paul Duffy had some tough questions for him, too: “If you hadn’t made those mistakes with the initial analysis, would SPF still have been one of the top three?”

Spray foam contractor Gary Talbott said, “Those of us in the contracting business have suffered financially because of this. We’ve suffered a lot.”

As things stand now, the DTSC is keeping spray foam on the bad list. SPFA and others have asked them to remove it because of all the mistakes that led to spray foam being listed, but the DTSC seems to have backed itself into a corner and refuses to take what seems to be the most reasonable action.

If they stick to their guns, the spray foam industry will have to complete an Alternatives Analysis. Dr. Duncan told me that this will cost a lot of money and is likely not to provide any worthwhile results.

Also, the three California Assemblymen raised a good point about the Alternatives Analysis:

“How can DTSC require alternatives analysis (AA) of adopted priority products while it is simultaneously conducting its pilot program and has not yet developed tool modules, AA guides, and training workshops for prioritized companies?”

So for now, the battle appears to in a stalemate. Both sides are spending a lot of time and money on a process that in the end will most likely be seen as useless.

Except maybe for those who are opposed to all use of foam insulation. They’ll probably latch onto spray foam’s being put on the bad list and use it to try to shoot down what is actually a pretty good product. If you encounter the argument that spray foam must be bad because the state of California has it on their “bad list” or worse, that they’re going to ban it, learn the truth first.

SPFA Statement on the DTSC Announcement

Also see the links to the workshop transcripts in the article above.

All Over the Map — The Imprecision of 24 California HERS Ratings

1. An odd little tidbit appears on Mr. Palmer’s Zoominfo page. He’s listed as having been the “Wickedness Impediment Opening Manager” at the California Department of Toxic Substances Control at some point in his career. What?! Surely that can’t be a real position. I know California can be strange, but certainly not that strange. Right?