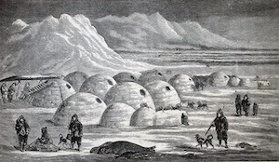 A historical perspective on Passive House

First, the history. Joe went way back and started by saying that the igloo built by Eskimos was the first Passive House. It uses ice, with an R-value of 2 per inch but with very thick walls. It has an air-lock entry to minimize infiltration. It has minimal glazing. And, Canuck Joe said, it’s Canadian! Jumping to modern times, Joe discussed the history of energy efficiency and mentioned that that efficiency movement split into two camps back in the ’70s: those who pushed for superinsulated houses and the advocates of passive solar, or “mass and glass,” as Joe called it. (The passive solar camp has since turned into the renewables camp, with a great emphasis on converting solar energy into electricity with photovoltaics.)

Back in the ’70s, though, that camp was focused on capturing the heat from the sun in all kinds of ways. Joe mentioned a few and then said, “If you need something like rock-bed heat storage, you’ve made a mistake.”

Why did he say that? “I’m a conservation guy, not a renewables guy.” In the end, that’s what explains his interest in the Passive House program, I believe.

Following that introduction, Joe launched into the work he did in the early ’80s building superinsulated houses. He explained that he was using the Perfect Wall idea first published by N.B. Hutcheon (a Canadian, of course) in 1964. He discussed the R-2000 program in Canada and how it became a boutique program because of unrealistic expectations.

He also showed a lot of photos of his early projects and the failures they had to work through. My favorite was the house where they were going to embed ducts in the slab and then had to fight to get them to stay down as they floated in the wet concrete. That must have been a fun day! It’s also one of the reasons Joe loves scotch so much.

The reason he was doing that work

in the early ’80s, though, is that he didn’t quit the profession. In 1980, after hitting a low point in his life, he was living in his mother’s basement and ready to quit the profession and do something different. Then he went to hear Amory Lovins speak in Toronto and got inspired to redouble his efforts. We’re lucky that he did because his work and his company, Building Science Corporation, have helped to blaze the trail for those of us who came afterward.

Does he or doesn’t he?

Joe and his colleague Professor John Straube have been critical of the Passive House program. In his article, Just Right and Airtight, Joe wrote, “The group that really has me confused are the PassivHaus folks who are pushing 0.6 ach@50Pa.” In the next paragraph, he wrote:

Have you any idea how difficult it is to get to 0.6 ach@50 Pa? The number doesn’t seem to be based on anything that makes any sense. It is less than half the R-2000 number [1.5 ach@50 Pa] that didn’t make any sense. What I have been more or less able to figure out is that the 0.6 ach@50 Pa doesn’t come from any energy conservation rationale directly; it seems to be based on the need to prevent moisture problems in highly insulated building enclosures. That is the argument for the number 0.6 ach@50 Pa as I understand it. Never mind that the number, in itself, makes no sense as you can easily design highly insulated building closures without moisture problems that are not anywhere that tight.

He didn’t really raise this issue in his talk, and I think that caught some people off guard. One person told me afterward he was disappointed in the talk because Joe seemed too nice toward the program. He wasn’t sure that Joe was sincere. I guess I can see how someone might think that if they know of his previous criticism and then hear the talk, but when I put it all in context, it does make sense.

First, Joe is a conservation guy, and Passive House is an extreme conservation program. Second, Joe invited Katrin Klingenberg to speak at Building Science Summer Camp this year and gave an impassioned plea at the end of her talk not to let the program become a boutique program like R-2000 had. Third, I was hanging out with Joe and Kat the night before his talk (and drinking plenty of scotch), and I can tell you that he really does have a great interest in and affection for the Passive House program.

You can find another clue to where he stands on this issue in a comment he made during the annual crawl space Twitterview at Building Science Summer Camp this year. Asked if Passive House is an asinine program, he responded, “No, you just need to keep the good parts of Passive House and change the bad parts. And it needs to evolve. A boutique program that impacts a few hundred homes doesn’t solve anything.”

Joe concluded his talk by saying, “We’re family,” and he meant it.

I’d like to hear more about where he thinks the Passive House Standards should go, especially regarding the issue of air leakage, but the substance of his talk didn’t surprise me. What did surprise me, however, was that he gave his whole talk without a single F-bomb!

Quick Report on the Passive House Conference in Denver

Image of igloos in the public domain, from Wikimedia Commons.