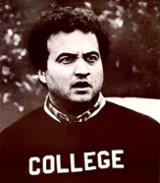 Do you really need to go to college? If your heart’s not in it, you can’t find a field of study that excites you, and your college degree doesn’t help your job prospects, the answer may be no. But what can you do without a college degree? Plenty, as it turns out. And there’s also plenty you can do that requires putting your brain to good use. Whatever you do, just don’t end up like John Blutarsky (the character played by John Belushi in Animal House), who said when he got susupended: “Six years of college down the drain!” And then there was Dorfman, who was admonished, “Fat, drunk, and stupid is no way to go through life, son.”

My grandfather was a tradesman

My grandfather, Allison Sr., was a tradesman. Born in 1909, he came of age just about the time the Great Depression hit and had to take whatever work he could get to help support his family. The second oldest of five boys, he took that responsibility seriously. His older brother, my Uncle T., also worked in the trades, but the younger three were able to go to college and get white collar jobs.

Although his younger brothers made more money than he did, I never saw him as anything but content with the life he was living and the work he was doing. He was an electrician, plumber, and HVAC contractor. Integrity and responsibility were more important to him than status or money. call came in late at night or on a Sunday, he put on his work clothes and went out to help. He knew his trades, he enjoyed his work, and he was happy with the life he created for himself and his family. As one of the direct beneficiaries of his life and his work, I have the utmost respect for how he lived and for people in the trades in general.

Pap-paw was a tradesman. He didn’t go to college. He didn’t put on fancy clothes to go to work. He wore khaki pants and a khaki shirt every day except Sunday. Yeah, he got dirty and sweaty working outside and in hot Louisiana attics, but he was doing something that people needed and he was good at what he did.

I was lucky that I got to spend two months each summer through my teen years being a gofer for him and my uncle. I probably got as much education in those two months than I did in the nine months I was in school. I’m also honored to share the same name with such a great man.

Pap-paw didn’t need a college education to ply his trade, but he certainly needed a lot of knowledge. He understood compressors, blowers, the refrigeration cycle, tools, materials, and much more. I don’t know much about the early years of his career and how he learned all that he knew, but I imagine he took advantage of all the training and education opportunities he could find.

As a Frigidaire dealer when he was part of Bailes Brothers, he no doubt got plenty of training from Frigidaire. Today, all or most of the big companies in the trades offer different kinds of training. Mitsubishi has a lot of different types of training for designers, installers, and service techs of their mini-split heat pumps. Want to learn hydronic distribution systems? Check out the training opportunities with Taco FloPro. They have a beautiful new training center in Rhode Island that I hope to visit soon.

If you want training in a trade, it’s out there. It’s a really exciting time to be working in the trades, in my opinion, because there’s some much cool new technology and a lot of new thinking is being applied to them as well.

For example, in the world of construction and mechanical systems, building science is changing the way we look at buildings. Traditional education and training programs are incorporating building science. There are also new certifications that complement the traditional: RESNET Home Energy Rater, BPI Building Analyst… The knowledge is available. I hear some blogs even give it away for free!

This past Friday, 21 September, was National Tradesmen Day. We have huge needs in this country, and we also having an aging workforce in the trades. If you want opportunities, they’re

available in spades in the trade. There are a lot of workers who think that doing things the way they’ve always done them is the recipe for success. There’s a lot of bad work out there as a result. See Exhibit A, this odd duct system I wrote about last week. (This may well have been a DIY job, but still, someone’s gotta fix that crap.)

We need people who understand how things work, have the mechanical aptitude to make them work, and are willing to get to work. These are jobs that can’t be outsourced. We need people right here at home to do them.

I can’t say this any better than Mike Rowe, the host of the show Dirty Jobs. On the Go Build Georgia website, you can watch some great videos where he makes the case for working in the trades. Go watch the videos! Really. They’re well worth it. The title of this article is a quote from the Alternative Education video on that page.

Why should you listen to me?

Let me end on a personal note. You may wonder why you should listen to some guy with a PhD in physics telling you to consider skipping college. Yes, I got a bachelors degree and then went to school for another seven years. If I’d found the world of building science when I was younger, though, I may well have foregone some or all of that graduate education.

I don’t need a PhD in physics to do what I do now. The physics background is indeed handy, but aside from the training in how to think that I got in grad school, I don’t use any of the advanced education I got there.

If you want a college degree (or 2 or 3 or 4), by all means do it. But don’t do it because you feel like that’s the path you have to follow, that without a degree, your prospects will be limited. Do you think Bill Gates or Steve Jobs felt like their prospects were limited because they didn’t have degrees? They didn’t work in the trades, which may mean that the kind of opportunities they found in computers are still available there.