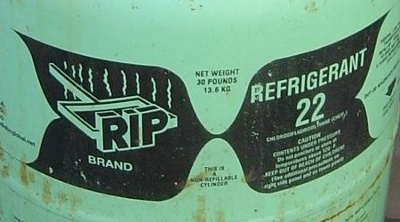 A year ago I wrote about the use of hydrocarbon-based refrigerants being sold as substitutes for R-22, the dominant refrigerant of the past two decades that is being phased out to protect the ozone layer. Yes, propane and other hydrocarbons can work just fine as refrigerants for air conditioners.

The problem arises when they’re used in place of non-hydrocarbon based refrigerants like R-22. Hydrocarbons are flammable and can create hazards for HVAC service technicians who may not take proper precautions if they don’t know that a flammable refrigerant has been substituted for the nonflammable they expect to be in the system.

You can find plenty of the substitutes online, and you don’t even have to be a licensed HVAC contractor to buy them. Evidently the problem hasn’t gone away since I wrote about it last year. Hence the FBI’s involvement. They’re looking for homeowners and do-it-yourselfers who have gotten these flammable refrigerants into their air conditioners so they can go after the sellers.

See the FBI’s page to learn more about their investigation or to complete their questionnaire if you’ve gotten any of the unapproved refrigerants in your air conditioner.