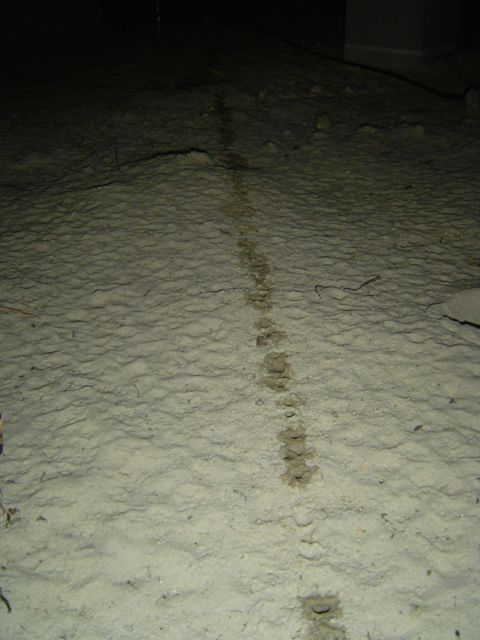 A line in the sand has some significance for Texas, the state where I was born. Colonel William Travis used his sword to draw such a line in the waning days of the Battle of the Alamo. As General Santa Anna had the Texans completely surrounded and asked for their surrender, Colonel Travis asked for all those who would join him in fighting to the death to cross the line and stand with him. As you can see below, homes in hot, humid climates sometimes draw a line in the sand, too.

Who drew that line?

How did it get there? It’s not a snake trail; they don’t travel in straight lines. It’s not a snail trail either; they leave a continuous line of slime. No, it’s pretty clear from the photo that this line in the sand is from drops of water. Is it a plumbing leak? Nope. Not that either. The problem here is a duel between the duct and the dew point. As you know, vented crawl spaces and the psychrometric chart are not friends. If you have this problem, it means there’s too much water vapor in the crawl space air for the amount of insulation on the ducts.

It also means you’re wasting energy and may have comfort problems in the home. Every molecule of water vapor that condenses on that duct adds heat. That heat finds its way to the cold air inside the duct. Also, since the duct is underinsulated, the cold air picks up more heat by conduction. The result is that the air getting to the vent in your home won’t be as cold as it should be.

The two primary ways to solve the problem are to add more insulation to the ducts or remove some of the water vapor. The latter is best accomplished by encapsulating the crawl space, but in a flood zone, as this home in Hilton Head is, that can be tricky. Find a local pro if you want to consider that option. Of course, you could also rip all the ductwork out and move it up into the conditioned space above, but that can be cost and space prohibitive in an existing home.

The easiest thing to do is to reinsulate. Remove the existing insulation. First seal the ducts thoroughly, though, since cold air leaking into the insulation exacerbates the problem. This may have the added benefit of preventing the sucking and blowing problems I described yesterday. The caveat I mentioned in that article still applies, too. See below.

In a hot, humid climate, the dew point of the outdoor air can get up to 80° F. In a vented crawl space it can go even higher. That means you need to have enough insulation on ducts in that space, assuming you’re not going to encapsulate or move the ducts, to keep the temperature of the outer jacket higher than 80° F.

The ducts in the house shown above had only R-4.2 insulation, and the ducts were leaky. Going with R-8 duct insulation would probably keep the ducts dry most of the time, as long as they’re sealed, too. And don’t forget to seal the outer wrap completely and insulate the boots, too! But there’s an important caveat: You shouldn’t seal ducts without also measuring—and probably fixing—the air flow in the ducts. Most duct systems are too restrictive. I know some contractors who almost never retrofit an existing duct system. It’s easier and cheaper for them to remove and replace the whole thing than to try to fix the existing duct system.

As Colonel Travis did in that famous battle for Texas, your home also can draw a line in the sand. If it does, are you going to stand with your house and fight? You’ve got building science on your side.

The Lesson of the Raining, Dripping, Crying Duct Boots