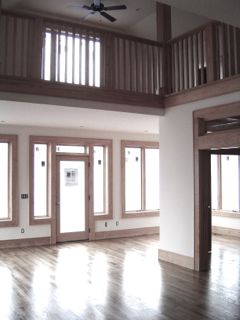 For example, when a HERS rater enters the data for a home, there’s no place to enter how many televisions the home has. On page 3-26 in the HERS Standards, you’ll find that the calculation for energy used by televisions comes from a formula based on the number of bedrooms:

In the formula Nbr stands for ‘number of bedrooms.’ Every 3 bedroom home that gets a HERS rating will be modeled as using 413 + (69 x 3) = 620 kilowatt-hours per year for televisions. If you see a car with a ‘Kill Your Television’ bumpersticker in the driveway of a 3 bedroom home, there’s a good chance they’ll use less than 620 kWh/yr for TV. If another 3 bedroom house has a constant pulsating blue glow from every room, they probably use more than 620 kWh/yr. The HERS Index won’t capture those operational differences.

Both labels are useful. The home energy rating is useful because we want to know how energy efficient one home is compared to another. That’s what the HERS Index does for us. For a home to get certified in a program like ENERGY STAR or LEED for Homes, we definitely want to take people out of the equation. That’s why the HERS Standards set the operational parameters the same for each home being rated.

Philip Fairey and David Goldstein wrote a paper for RESNET in 2009 that describes the differences between asset and operational labels. “The HERS index, like a car’s miles per gallon rating or an air conditioner’s SEER label, is based on an engineering ‘model’ of its physical attributes and a standard set of operating assumptions,” they wrote. In addition to the two common asset labels they mentioned for comparison (MPG & SEER), most of the efficiency labels we’re familiar with are asset labels: Energy Factor (EF) for water heaters, Annual Fuel Utilization Efficiency (AFUE) for furnaces, Heating Season Performance Factor (HSPF) for heat pumps in heating mode, and others. No matter what the label says, ‘your mileage may vary’ because asset labels don’t account for operational differences. Regarding operational labels, they wrote, “It is widely known in the building science community that a large fraction of actual home energy use is driven by the lifestyle and operating characteristics of the inhabitants themselves. As a result, the [EPA’s Home Energy] Yardstick actually says more about the energy habits of the inhabitants than it does about the physical attributes of the home.”

In the end we need both. We want an asset label that allows us to answer the first question I mentioned at the top of this article with, “A home energy rating is very accurate.” And to answer the second question, we’d say, “Your energy bills may vary widely from the estimate of annual energy use that the HERS rating gives you because it doesn’t factor in the behavior of the occupants. It rates the asset (your home) but not how you operate it.”

A home energy rating is a powerful tool, one that I’ve written quite a bit about here in the Energy Vanguard Blog (see list below). We also teach a class for home energy raters, and our next one is coming up at the end of this month. If you’d really like to learn more about home energy ratings, consider coming down to Orlando at the end of February for the RESNET conference, which is alway a great opportunity for learning and networking.