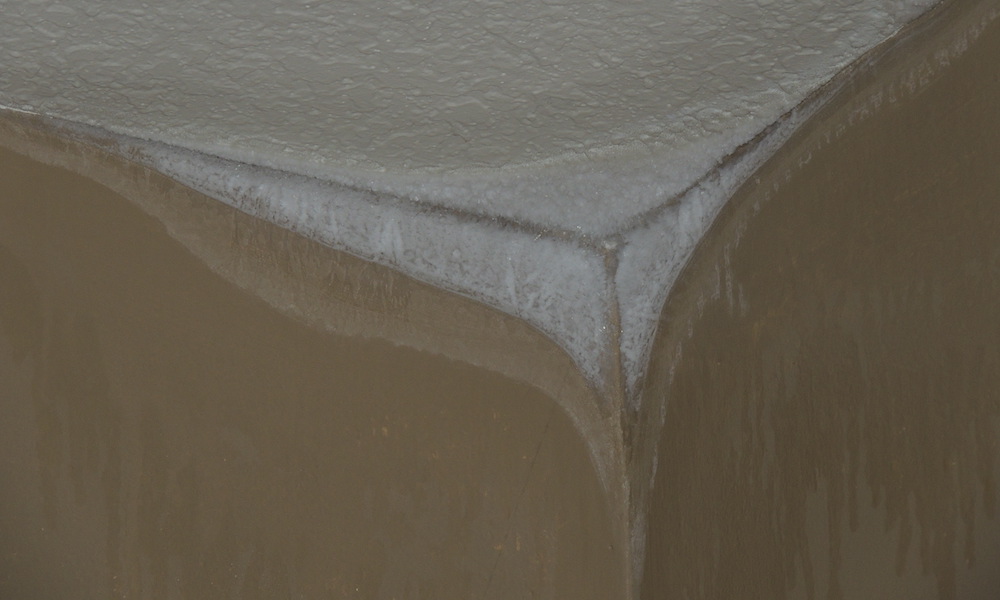 Not long ago, Erik Henson an energy auditor with HD Engineering and Design in the Kansas City area, posted the photo below on LinkedIn. As you can see, frost has formed on the walls and ceiling inside the house. It’s not uncommon to see frost on windows in cold climates. But walls? That’s not as common. What’s going on here?

At those indoor conditions, the dew point was 46° F. As you can tell from the photos here, the frosty parts of the walls and ceiling were below 32° F, well below the dew point for the indoor air.  The photo below gives a wider view, and you can see another frosty part to the left as well as water dripping down the walls.

First, let’s look at the building enclosure problem. The owners took the frost photo, and Erik went to the house a week later to check things out.

The photo below shows the attic right above where the frosty corner was. The insulation wasn’t missing when he arrived. He pulled it back so he could see what was going underneath. The board across the top plate of that wall and the electrical wire prevented the insulation from making good contact with the air barrier (the ceiling drywall).

Also, it’s close to a soffit vent, and it was windy when the frost formed.  The ventilation baffle is open along the bottom and left side.  That allows the cold wind to come in right beneath the insulation, which again, isn’t resting right on top of the ceiling drywall.

The other factor is the high humidity in the home. In the winter time, it’s better to keep it lower, closer to 30% than 50%, to prevent moisture problems in a home that doesn’t have a robust building enclosure. 49% RH isn’t horrible…unless it’s really cold outside and your insulation doing its job. The reason their humidity was so high was that they have 8 kids and kept the humidifier going 24/7.