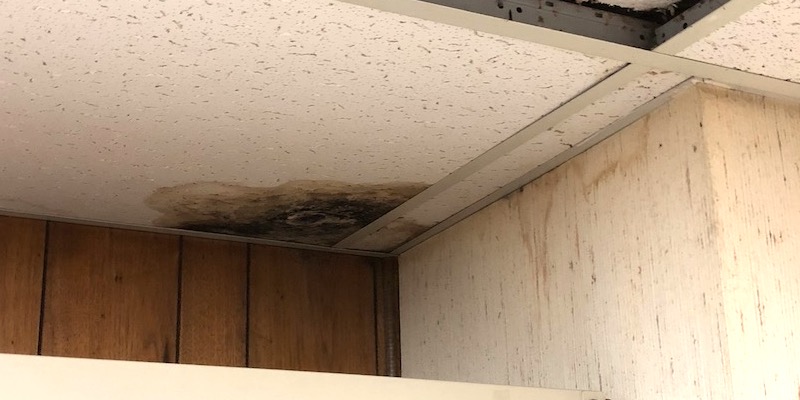 How water vapor interacts with materials

The first thing to understand is that water vapor floating around in the air gets pulled in by the materials in contact with the air. Let’s ignore the issue of hygroscopic materials here and focus on the effect of temperature. The dividing line is the dew point temperature. When the temperature of a material is above the dew point, we don’t get condensation. When it’s below the dew point, condensation happens. And the lower the temperature of a material, the more water vapor it will pull out of the air. (Yeah, I know. Condensation isn’t the same thing as adsorption or absorption. To get into that issue, go read my article, Can You Get Condensation on a Sponge? And don’t skip the comments.)

We use dew point to our benefit with dehumidifiers, which run humid air over a cold coil, condensing out a good deal of water vapor. When we’re talking about parts of a building, though, we’d rather not have water vapor condensing on (or absorbing/adsorbing in) materials, whether that’s bathroom windows, crawl space band joists, or vinyl-covered walls. Accidental dehumidification is generally not a good thing. So here are the two rules.

When you’re looking at plans for a building or trying to understand what went wrong in an actual building, a good place to start is identifying where the humid air is and what parts of the building it’s in contact with. If you’ve got a vented crawl space in a humid climate, the humid air is in that crawl space. The dew point of that air could be 75° F or higher. When the living space above is being conditioned, the floor could go below the dew point, depending on how cool the occupants keep the house. But even when the thermostat is at 75° F, the floor could be cooler. If that crawl space air finds any wood or other materials cooled by contact with the space above, those materials could be sucking up water from the humid air.

You could have problems in winter, too. The photo below shows the band joist, floor trusses, and subfloor in a crawl space on a cold day. The builder would go on to encapsulate the crawl space to prevent this problem, but they didn’t get the vapor barrier installed in time to prevent this mess. The humid air in the crawl space found cold surfaces everywhere while the house was still being framed. With crawl spaces, you can achieve the separation of humid air and cool surfaces a number of ways. You can encapsulate the crawl space and remove the humid air. Or you could make sure the humid crawl space air doesn’t come anywhere near surfaces that might be below the dew point. Fiberglass batts in the floor won’t get you there. You’ll need to use closed-cell spray foam or put some kind of air barrier (usually rigid foam board) over the bottom of the floor joists.

The same applies to every other part of a house. Where you have humid air, you need to make sure there are no cool surfaces. Sometimes those surfaces are cooled by air conditioning the living space. Sometimes they’re cooled by outdoor weather.

OK, the second rule is really the same as the first one, but in reverse. (Technically, it’s the contrapositive for you logicians out there.) The first rule says where you have cool surfaces (i.e., below the dew point), you need to keep humid air away. The second rule says where you have humid air, you need to keep the neighboring surfaces above the dew point.

Think of a wall assembly. Moving from inside the house to outside, the basic assembly consists of drywall, framing/cavity insulation, sheathing, and cladding. Where’s the humid air? In summer, it’s most likely outdoors. If you don’t want outdoor water vapor condensing on your siding or sheathing, you need to make sure those materials don’t go below the dew point. If you’ve got insulation in the walls, you’re most likely not going to have a problem here. Even with no insulation, those walls aren’t likely to be below the dew point unless you’re keeping the house really, really cold.

The surface most likely to be at a temperature below the dew point is the drywall. If you’ve got a problem there, you’ve violated rule 1. That means your wall sheathing isn’t acting as a good air barrier. (The lead photo in this article shows a case where that happened.)

The more common example of a rule 2 violation is condensation on interior side of the exterior sheathing in cold weather. If you keep the air in the home at 70° F and 40% relative humidity, the dew point is 45° F. Normally we wouldn’t consider that to be humid air, but it could certainly find surfaces below 45° F in winter. That makes it a potential source of moisture problems. But even those aren’t quite enough for houses in cold climates. Water vapor can move through a wall assembly by diffusion as well as by air leakage. Using continuous insulation outboard of the sheathing solves that problem by keeping the sheathing warmer. Martin Holladay has covered this subject in his article, Calculating the Minimum Thickness of Rigid Foam Sheathing. The newer codes also include requirements for continuous insulation in most climates.

If you opt for double-stud walls, you’ve got to make sure you have a vapor retarder to slow the movement of water vapor to the cold sheathing. See my article on double-stud walls for more on that issue. Another good resource is Martin Holladay’s article, How Risky Is Cold OSB Wall Sheathing?

Water vapor probably gets more attention than it deserves in our discussions of moisture problems in buildings. Bulk water from bad flashing, stupid roof design, and failing gutters causes a lot more problems than water vapor. Still, water vapor does matter. If you’re reading this on a cold winter day, you can rest assured that condensation is dripping down a bathroom window somewhere and mold is growing in a house with poorly insulated walls and unvented space heaters. If you can identify a problem resulting from humid air, you have two ways to deal with it: keep the humid air away from cool surfaces or keep surfaces warm when they’re in contact with humid air.