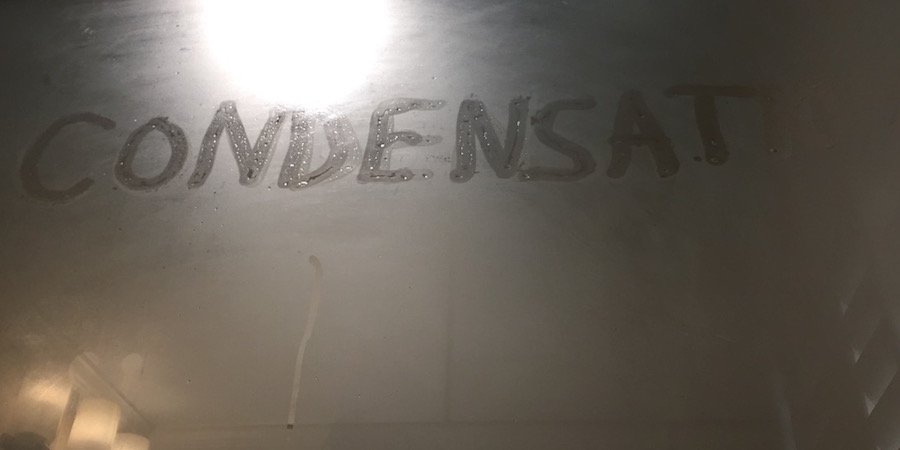 You may have heard or read somewhere that you should run your bathroom exhaust fan whenever you take a shower and then let it run for a while after you’re done with the shower. Showers increase the humidity in the bathroom. Sometimes it gets high enough to cause condensation to appear on the mirror and other surfaces in the bathroom. And that can result in mold growth. So you should always run your bath fan when you shower. Or so they say.

Bath fans are a really nice thing to have. I know. I lived without one in my 48 year old condo for years before finally remodeling and installing an exhaust fan two years ago. They do indeed remove moisture. I took that photo above one day last summer after intentionally leaving the fan off so I could get a good picture of condensation. (Yeah, I’m like that.)

But they also remove odors. Bathrooms have been known to be smelly on occasion. You know, with all the candles and incense and hairspray and stuff. Right? Oh, and then there’s the cleaning products. And, in some bathrooms (not mine!), a pile of dirty laundry. Seems like there’s something else, too, but anyway, you get the point. Bath fans are good for removing odors.

Now, let’s explore the humidity side of things. Taking a shower increases the amount of water vapor in the air. But that may not be a bad thing. What’s bad about dumping a lot of moisture into bathroom air is when it gets into the porous materials, like drywall, and keeps them wet. When they stay wet long enough, they can start growing mold. Not good.

Let’s look at another aspect of what wintertime does in many homes. What’s the relative humidity in your home when it’s cold outdoors? Remember: Cold air is dry air. It’s not the furnace drying out the air in your home. It’s cold, dry air leaking in, or being pulled in by the mechanical systems and stack effect.

So if your home’s air is really dry, not running the bath fan when you shower may be a good thing. Are you running a humidifier to combat dry indoor air? All the more reason not to run the bath fan.

Moisture migration after a shower

I live in a 48 year old condo. I’ve done some work to make it more airtight but not enough yet. (OK, if you really want to know why, it’s because our condo association pays the gas bill and I’m behind on retirement savings. Skin lotion is cheaper than replacing the atmospheric combustion appliances. And I have a low-level carbon monoxide detector. There. Now you know.)

When it gets cold, which Floridians think happens way too often and Vermonters believe almost never happens, our indoor air gets pretty dry. We’ve had some cold snaps this winter, and here’s a couple of graphs of data from one of them. The outdoor temperature on this particular day started off at about 25° F and got up to 47° F. (We got 2″ of snow later that night.) When is it OK to leave the bath fan off?

If you think it might help in your home to capture that moisture, here are a few pointers to help guide you.

There are two keys for making this work for you instead of against you:

If you decide to experiment with this, be sure to keep an eye out for condensation that lingers and any surfaces in the bathroom that might grow mold. If you can keep those two things under control, you should be fine leaving the bath fan off when you shower in winter. Even if you do run the bath fan for humidity control, the disappearance of condensation is a pretty good guide to when you can turn it off.

Does a Gas Furnace Dry Out the Air in Your Home?