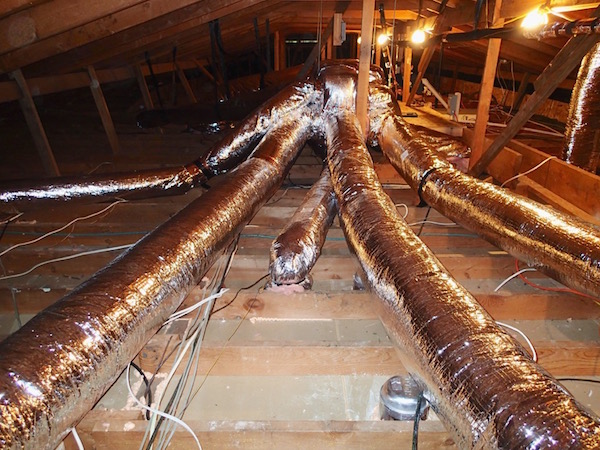 If you know a little building science, you’ve no doubt seen a lot of problems that occur with air distribution systems. Ducts just don’t get anywhere near the attention they deserve in most homes, partly because they’re hidden from view. I’ve written about ducts quite a bit here and have shown problems resulting from poor design and installation. We all know how stupid some of those problems are. (See the duct system beer cooler, for example.) So today I’m going to talk about a problem that seems to be invisible: the inadequacy of duct insulation even when the design and installation are perfect.

I’m in Georgia (IECC climate zone 3), where our current state code requires R-13 in exterior walls, R-18 in attic kneewalls, R-19 in floors, and R-30 in ceilings. If we put ducts in unconditioned space, they have to be insulated to either R-8 (if they’re in an unconditioned attic) or R-6 (in any other type of unconditioned space).

Have you ever considered the temperature differences (delta-Ts) across those different insulated surfaces? Let’s take a look at what they would be on a summer design day here in Atlanta. The outdoor temperature would be 92° F. The indoor temperature would be 75° F. Crawl spaces can vary a lot, depending on how much above-grade foundation wall there is, but 85° F is typical. Attic temperatures are about 120° F. And conditioned air inside a duct is about 58° F. So the delta-Ts would be:

I don’t know about you, but when I look at that, it seems we may be prescribing too little insulation for ducts in unconditioned attics. The largest delta-T in the house has the lowest R-value. Hmmmm.

How much load does low duct insulation add?

As Kai Ryssdal says every day on MarketPlace, let’s do the numbers. I pulled up a job we did a few years ago to play around with a few different scenarios. The house is about 3,500 square feet, all on one floor. All the ducts are in the attic. According to RightSuite (the software we use), the supply ducts have about 560 square feet of surface area and the return ducts 101 square feet. Looking at the cooling side only, the additional load would be:

But what if you have an older house that doesn’t have R-8 duct insulation? Or you live in a state that doesn’t require R-8 on ducts in attics? (I’m looking at you Mississippi and Alabama.) R-6 and R-4.2 are common R-values for ducts. Here’s how that 3,500 sf house would come out with those:

The numbers are even higher for the additional heating load.

Some other factors to consider

The duct insulation R-values I mentioned above are what’s on the product label. How often do you think you get the full labeled R-value? Even with a really nice installation, as in the photo below, there’s usually compression at the supports. If you recall the point of my Flat or Lumpy article, you’ll realize that any compressed areas or places where the insulation doesn’t cover the ducts at all or is reduced in effectiveness for some other reason will result in more heat loss. Go back and look at the mind-blowing effect of an uninsulated attic hatch on the average R-value for a ceiling to see what I mean.

And then there’s the issue of how the R-value on the label is determined. That’s a topic worth its own article, though, so all I’ll say here is that when a product is laid out flat for testing and then installed cylindrically, the actual R-value likely isn’t the same as what’s on the label. Stay tuned for more on that.

What are the remedies?

Unconditioned attics are the worst place to put ducts. If you’re facing that as one choice for a new home or if you already have that in your existing home, here are some ways to reduce your duct losses:

We’ve gotten new homes to be much more efficient in the past decade because of energy codes that require blower door and duct leakage testing, better windows, and higher levels of insulation. Now it’s time to focus on the next level of problems. And that means it’s time to deal with duct insulation in a more meaningful way than just increasing the required R-value to 8 for ducts in attics.

Go Up, Go Small, and Get Those Ducts Inside Conditioned Space