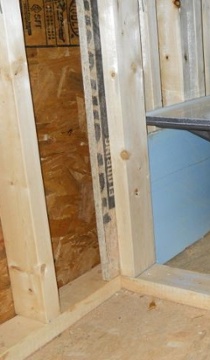 My issues with Advanced Framing are not with the details, or at least only with a small part of the details, and are more with representation of the whole package. So in this piece I am going to dwell more on the context, and less on the details. I’ll spend a little time talking about what I see is problematic, and more time talking about the fallout of the problems and how it undermines what there is good and useful to be taken away from this.

Advanced Framing is well known among green building advocates and professionals engaged in energy matters of building houses. I’m not going to explain it in detail because there are many good resources online. If it’s new to you, or you’ve heard of it but don’t know the details, here are a few solid resources. Green Building Advisor has a good overview in the Energy Nerd blog. You can also go to ground zero at the DOE’s page on Advanced House Framing. In the green building frenzy, there have even been entire how-to books published on the subject.

Let’s get the brief lesson over with already so we can get on to the important ideas. Advanced Framing is a variation of the Western Platform Framing model, developed during the 1960s primarily as a technique to reduce the amount of lumber used in framing, and hence the cost. More recently it’s been taken up by green building advocates as a way to improve the energy performance of wall assemblies. It’s telling that this was not the original intention, and that while it does do a little bit of this, it does not do it exceptionally well. The main mechanism here for improving performance  is reducing thermal bridges by simply reducing the amount of wood in the wall, and hence the bridges from the exterior to the interior.

Advanced Framing sets out to do this with several common-sense modifications to standard framing practices, and one very impractical modification. First the list of what is common sense:

These are all sensible techniques, easy to do for any home builder, whether they think they are pursuing better performance, or just trying to save a few dollars on lumber. It’s something we should see being done everywhere, after all these ideas have been kicking around for 50 years. But it is not, and even in the current climate where we now have a small community of green builders zealous about performance and sustainability, the vastly larger housing industry ignores these techniques, things that could legitimately save them money and earn them more profits.

So why does the housing industry ignore what could be a license to print money, albeit not a great deal of money, but I don’t recall this industry ever shying away from fractional gains – I’m talking to you 7/16″ sheathing. It’s because of one additional modification to standard practices, the one I feel is problematic:

Wow, brilliant! We cut the thermal bridging of the top plate in half there and save a pile of studs! Ok, let’s high-five all around before we read the fine print on this deal. You see, it brings along a bit of  baggage. To eliminate that one 2-by from your top plate, you’re going to have to line up all your framing on a 24″ grid.

Can we re-engineer for the single top plate and grid?

Wait a minute there before you run out the exit. Did you just say you want me to line up all my framing on a 24″ grid? As in every window location has to fall into that grid? And my windows have to be 24″ wide or 48″ wide or they are going to need an off-grid jamb stud? The last time I looked, my front door is not 24″ wide, or 48″ wide for that matter. And things that make big holes in my floor, like stairs? Well, they’re rarely 4ft wide and even less so 24″ wide.

Ok, ok, this isn’t rocket science, and I’m a grown up. I can design a house on a 24″ grid, and it will all be easy as pie. My housing industry is working from existing house designs that are going to require at least some re-engineering to make this work. Maybe I’m a small builder working with only 20 or 30 of them myself, but let’s take a peek out on the Internet. What do you know?! There are something like 100,000 house designs to update. That’s only doing a couple of thousand plans per year for the past 50 years. Sure we can do that, sharpen up our pencils and get right on it, but only if you share some of what you’ve been smoking.

Pardon my snark if it chafes you. Yes, I’m exaggerating the scale of re-engineering here. The point is that this one recommendation of Advanced Framing brings with it so much baggage that the trouble to adopt it greatly outweighs the benefit. The proof is in the numbers. Advanced Framing has a track record of a spectacular Failure to Launch, in that after 50 years, it has only recently won the support of a tiny segment of a special interest within the housing industry. As far as the industry goes Advanced Framing has already come, failed, and gone. And no amount of trying on the part of those interested in better performance will change that. Gregory La Vardera is an architect in practice, and a building scientist by training. Outside of his local practice he is focused on opening up niche markets in housing, and is interested in the development of broadly adoptable strategies for high performance building including off-site manufacturing of houses. You can read his blog for more info about the Swedish Platform Framing method and other topics.