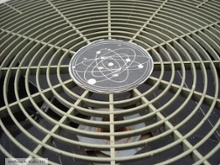 Have you heard the term

‘dry-ship R-22 unit’ yet? No? Well, let me tell you a dirty little secret of the EPA and the HVAC industry. It involves the environment, the costs that homeowners pay to buy and maintain air conditioners and heat pumps, and a legal loophole that’s starting to look as big as the ozone hole.

Have you heard the term ‘dry-ship R-22 unit’ yet? No? Well, let me tell you a dirty little secret of the EPA and the HVAC industry. It involves the environment, the costs that homeowners pay to buy and maintain air conditioners and heat pumps, and a legal loophole that’s starting to look as big as the ozone hole.

As I’ve mentioned here before, my connection to the world of heating and air conditioning contractors goes way back. My grandfather had a heating, AC, plumbing, and electrical business (Bailes Electric) in Leesville, Louisiana, and I used to spend my teenage summers going out on calls with him and my uncle all day long. (The measuring cup below, which sits on my desk, is from the earlier business he had with his brother, Russell.) One of the things we often did on calls was put the gauges on air conditioners to check the refrigerant charge. Often, my grandfather, Pappaw, or my uncle would prepare to fix a leak in the system by emptying all the refrigerant first. Back in the ’70s, there were no refrigerant capture systems or regulations, so we sprayed it all right out into the air. The refrigerants of choice at the time were the chlorofluorocarbons (CFCs), which usually went by their trade name, Freon.

Well, in 1987, the Montreal Protocol began the phaseout of CFCs and a plan to move to better and better refrigerants. (Better in terms of their effect on the ozone layer, that is.) In the early ’90s, CFCs were phased out and replaced with the HCFC R-22 in air conditioning systems. At the end of 2009, the US banned the production of new air conditioners and heat pumps that used R-22, and the more benign HFC R-410A was set to become the only game in town.

A loophole the size of the ozone hole So, the US EPA gave manufacturers and contractors some wiggle room, of course. They couldn’t tell the manufacturers they had to destroy all their unsold units in 2010. They also couldn’t just strand all the people out there who already had R-22 in their air conditioners. As a result, manufacturers could sell their stock of R-22 units, continue to make parts to maintain the existing systems, and keep making R-22 refrigerant.

If you go to the EPA’s website to read about the phase out of R-22, you’ll find this statement:

Do you see the loophole? As long as they ship the units ‘dry,’ manufacturers concluded, they could continue to make and sell air conditioners and heat pumps designed to use R-22. Hence the term, ‘dry-ship R-22 unit.’

Yeah, but how many are really doing it?

As it turns out, a surprisingly high percentage of new systems are in the ‘dry-ship R-22’ category. Recently I was speaking with an HVAC supply house executive who told me that these loophole escapees make up about 30% of the units they sell. The author of an article on dry ship R-22 units on the Contracting Business website interviewed his local suppliers and found the following:

Yes, some of these might actually be used as they’re intended — as replacement components in existing systems — but I think most people in the industry know that the majority of these dry-ship R-22 units are new installs.

From what I hear, it was a manufacturer of low-end equipment that first walked through the loophole and starting making dry-ship R-22 units. When the EPA didn’t step in to close the loophole, the race was on. Both the EPA and the HVAC industry share the blame.

The makers of higher-end equipment don’t want to give up market share to those on the lower end who can exploit a bigger price difference. The dealers and the contractors, likewise, have to compete, and the EPA has forced their hand by allowing this situation to continue.

Both sides are to blame: the HVAC industry for exploiting the loophole and the EPA for not closing it. The EPA is definitely more to blame because they could have shut this down as soon as it became apparent. They still can but are dragging their feet.

Carrier has petitioned the EPA to close the loophole. John Mandyke of Carrier, in an interview with ContractingBusiness.com, explained it this way: “As an industry, we were prepared for the R-22 transition — manufacturers had invested in the new technology and contractors had invested in technician training, as well as in helping consumers prepare for this transition. The loophole threw all that up in the air.”

I don’t understand all the forces at work in the meeting rooms of those HVAC manufacturers, but I wish they’d all take a principled stand and refuse to play this game. Perhaps if the bigger names did so, they could shame any company that exploited the loophole.

As long as the manufacturers keep making the dry-ship R-22 units, though, the downstream companies—the dealers and the contractors—feel the pressure to play the game, too. Not all of them, however. I know of one contracting company that, out of the more than 2000 condensers they’ve installed since this came up, only about 10 have been dry-ship R-22 units.

If you’re in the market for a new air conditioner or heat pump, you absolutely need to make sure that you don’t get a new system using what should be an illegal refrigerant for new systems. If the contractor tells you that the R-410A system will be more expensive, ask him or her how much it’ll cost you to maintain the system. If they tell you anything other than that it’ll get very expensive as we get closer and closer to the ban of R-22, steer clear of them.

Don’t fall for this! It’s a dirty little secret in the EPA and the HVAC industry with plenty of folks in the industry and government willing to justify jumping through the loophole. Don’t follow them through that hole; the footing isn’t all that steady on the other side.

What You Should Know about Refrigerants (US EPA)