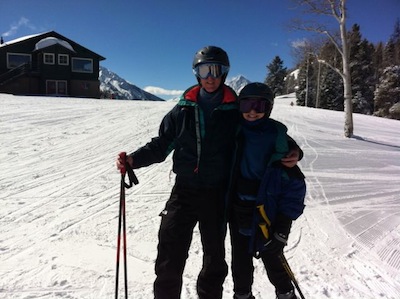 I spent a few days in Colorado this past week. This was a rare trip for me: It wasn’t for business or a conference. My wife, Elaine, and I went there on a belated honeymoon (we got married in 2009), and it was also an early birthday present for her. I’d never skied before in my life (except on the liquid form of dihydrogen oxide), but I took lessons for a day and a half and skied with Elaine the third day. It was terrifying!

I spent a few days in Colorado this past week. This was a rare trip for me: It wasn’t for business or a conference. My wife, Elaine, and I went there on a belated honeymoon (we got married in 2009), and it was also an early birthday present for her. I’d never skied before in my life (except on the liquid form of dihydrogen oxide), but I took lessons for a day and a half and skied with Elaine the third day. It was terrifying!

Well, let me qualify that: It was terrifying the first two days. Why? Because I didn’t have nearly enough control over what gravity was doing to my body as it raced down the slopes.

On the third day, however, my first day of skiing with Elaine, things clicked. I learned how to control my speed by shifting my weight properly, using the edges of the skis, bending my knees, and keeping my body forward. I had many fewer moments of feeling out of control and much less fear when I came to a place where the slope got steeper. Pretty much every 5 year old kid on the mountain was still better than me, but I was happy that I’d gained a modicum of control. (See the Afterword at the bottom for more about my skiing adventure.)

Building a home is like skiing. If you disregard the fundamental principles of building science, you’re like a beginning skier who’s not in control.

If you know the difference between an air barrier and a vapor barrier, flash your rough openings properly, and install HVAC systems sized and designed properly for the house, you’re on the blue trails. It’s a tricky business, building a home. When you master all the control layers and become a building enclosure control freak, you’ve graduated to the black trails. Congratulations!

One way that home building is not like skiing is that being out of control when building a home, in the sense I’m talking about here, isn’t terrifying. You don’t see the trees rushing up too quickly. You don’t try to correct by shifting your weight backwards (the wrong thing to do). You just go on about your job and deliver an inferior product. I’ve seen plenty of evidence out there of builders who are rank beginners. If you’re reading this article, you’re probably not one of them. But which trail are you on?

At nearly 52 years old, I didn’t think I’d ever learn to ski. I didn’t really have much interest in it, but I got an opportunity to visit one of the most beautiful places on the planet—Aspen, Colorado—and I jumped on it. My wife started skiing at the age of 7 but hadn’t skied in about 15 years, so at first, I thought we’d go out there and she’d ski all day while I did work. As the trip got closer, though, I suddenly began to think that I’d take lessons, which in fact I did.

Everyone had told me that Buttermilk was the mountain for beginners in the Aspen area, so that’s where I headed. (Naturally, I had plenty of friends who told me to go to the black trails with lots of diamonds and use telemark skis…but I didn’t follow their advice.) On my first day, I had a half day lesson in the afternoon. But I had an hour and a half before hand, so I took the beginner’s lift up to Panda’s Peak and skied down my first slope with no lessons. I made it to the bottom in one piece, but it was absolutely terrifying. Once the lessons started, we went to a much easier slope for a couple of hours before the instructor thought we were ready to go back to where I did my first run. It was much better this time. Still, I had a lot of moments of being out of control and terror and leaning back and falling on my butt.

The third day was when the switch got flipped. Suddenly I could ski in control, slowing down when I needed to, focusing on all the little details I needed to correct, and it became fun. In the first two days, I had moments of fun but overall, my time on the snow was dominated by fear. We did a few practice runs on the beginners slope at the bottom of the mountain but then headed up to the top of the mountain. It was fantastic! We skied several hours up there, and when the lifts closed at 3:30, we skied all the way down the mountain, about 2000 vertical feet. Wow! I think I’m going to have to do this again next year.