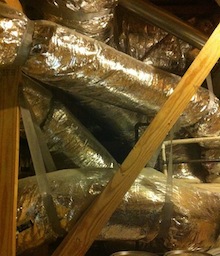 Flex duct. It’s ubiquitous now in homes with forced air heating and cooling systems. It’s easy to install. It’s cheap. The installer can show up and rough in a whole duct system without ever having seen the house before and without having a duct design. I’m not saying that’s a good thing.

Flex duct. It’s ubiquitous now in homes with forced air heating and cooling systems. It’s easy to install. It’s cheap. The installer can show up and rough in a whole duct system without ever having seen the house before and without having a duct design. I’m not saying that’s a good thing.

I’m not opposed to flex duct. I think it can work just fine if you have a good design and install it properly. That means supporting it properly, pulling it tight, not running it up high in an attic, and actually, not even putting it (or any kind of duct) in an unconditioned attic. Today I’m going to point out another common problem with flex duct, and this one has a simple solution.

A run of duct has the job of moving the air between the air handler and the vent. On the vent end, it connects to a boot, usually made of sheet metal. If a piece of flex duct is coming in horizontally and the boot opens up vertically, the installer usually turns the flex duct to make a 90 degree angle right there at the boot.

As you can see in the photo at right, that puts stress on the flex duct, which can lead to failure. See the big rip in the liner of that piece of flex duct? That’s in an unconditioned attic near Atlanta, Georgia. Attics get pretty hot in summer here and cold in winter. Except near that boot, which was blowing conditioned air into the attic. When I saw the house, the boot was already there, installed through the finished ceiling. In that case, the easiest thing to do was install a rigid elbow, which I did. Now there’s no stress on the flex duct liner there. The leakage is fixed, because I covered all the seams and joints with a thick layer of duct mastic, my favorite way of sealing ducts.

That vent also gets more air flow. The stress and potential for failure isn’t the only problem with turned-flex connection. It often restricts the air flow as well, so by using a rigid elbow in this case, the room below gets more conditioned air.

It’s not difficult to avoid these problems. As Joe Lstiburek likes to say, most of the trouble arises because we keep doing stupid stuff.

Should Flex Duct Be Banned by Green Building Programs?