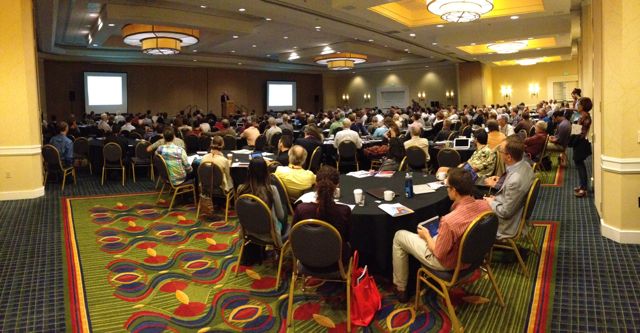 Before I start telling you why the conference was so great, though, let me remind you that I’m on the board of directors for PHIUS. But don’t think that means I’m saying all this is great because I’m on the board. It’s actually the other way around.

During the preconference sessions, I got to spend some time with my friend Jeff Reilich from Chapel Hill, NC. (Don’t know if I mentioned it here before, but he’s the one who once worked on a house with an 8000 cfm range hood!) We even took off for a while one day and drove over to the ocean and the next day went up to San Rafael to see John Proctor. Not part of the NAPHC, I know, but still a nice part of the overall experience. Plus, Proctor even invited us up into his attic to see his secret lab (photo below). Every secret lab needs a nice oriental rug, you know! I think it was Jeff who said the folks at the NAPHC are the smartest and most dedicated building science folks he spends time with. During one of the sessions at last year’s conference, Joe Lstiburek leaned over to me and said, “I really like this club.”

I’ve felt the same thing, and so did many others who attended this year or years past. The folks involved with this movement are doing amazing work. Dr. Achilles Karagiozis of Owens Corning gave the closing keynote address and did so with his usual smart and funny flair. The first part of his talk was a response to Dr. Lstiburek’s keynote in Denver two years ago, where Lstiburek said that the first passive houses were igloos and that you’re probably doing something wrong if you need to use WUFI.

Karagiozis, one of the developers of the WUFI software tool, responded by posing a scenario in which Lstiburek was stranded in Alaska after a helicopter crash and all he had to survive with was his laptop and WUFI. Karagiozis’s hilarious models killed Joe off two or three times before finally getting to an igloo design that worked.

The real meat of Karagiozis’s talk came after the funny opening segment, when he began discussing the power of dynamic modeling compared to the static modeling usually done.

When you use a tool like REM/Rate (the main home energy rating software) or PHPP (the spreadsheet modeling tool created by the German Passive House Institute), you get results for one particular set of conditions. You enter things like heating degree days and outdoor design temperatures and get numbers for how well the house performs…at those particular conditions. As the temperature and rainfall and cloudiness vary, however, from hour to hour and day to day, your model doesn’t tell you what’s happening unless you change the numbers and run it again.

The German passivhaus program relies on the static modeling of PHPP. PHIUS is still certifying projects using PHPP but passive house consultants certified through PHIUS can choose to use WUFI Passive as an alternate modeling tool.

OK, this is going deeper than I planned but you have to know something about modeling landscape to understand Karagiozis’s point. So, last year I took the WUFI 1-D class and learned a little about one-dimensional hygrothermal modeling. Briefly, it’s a way of modeling the heat and moisture flows through a building assembly. You put in the assembly details and the indoor and outdoor conditions, and then run it for whatever period of time you choose.

WUFI Passive does the modeling for a whole building enclosure, assembly by assembly. It also incorporates the passive house standards so you know if the modeled home meets the requirements for certification. It’s a nice tool, and Karagiozis has great confidence in it. “I have not seen a more accurate simulation of indoor conditions than using WUFI Passive,” he said during his keynote.

Graham Wright, PHIUS senior scientist, revealed the latest evolution of PHIUS’s new climate-specific standards in his talk on the first morning of the main conference. The first room he was scheduled in was way too small because this was where everyone wanted to be, so we moved back to the room where Bill Rose had recently finished giving the opening keynote presentation.

Wright’s presentation (pdf) was composed of 80 slides that averaged probably more than 100 words per slide. As you might suspect, it was not a presentation to be digested and understood by the end of his 80 minutes unless, say, you’re on the PHIUS technical committee and helped do a lot of the background work. I’ve got a copy of the presentation and am slowly working my way towards a bit of a grasp of the ideas. Never having gone through the passive house training makes it more difficult. (Katrin Klingenberg gave an introduction to the standards changes a few months ago on Green Building Advisor.)

Let me try to give you a quick summary of some of the main points Wright made.

That last point launched the tech committee’s efforts to find out what might be the best way to do this. Building Science Corporation, with funding from the DOE’s Building America program, has been helping with this work as they’ve looked at BEopt models of passive buildings in different climates.

The goal of that work is to find the real optimum in cost effectiveness. And then go beyond it. Wright’s reason for going beyond the optimum was, “Because that’s our schtick.” I’m not sure how much sense it makes to find the minimum and then go beyond it, but hey, that’s what the upcoming member comment period is for, I guess. As he pointed out in his summary, though, the goal here is “to avoid pushing people way out into diminishing returns.” Perhaps they’re following the 12-step program guideline here: Progress, not perfection.

From my layperson’s vantage point, the direction they’re going with this is a good one. Martin Holladay, the Energy Nerd at Green Building Advisor, brilliantly exposed the problem with diminishing returns of passive house levels of insulation with a little drawing he did a few years ago. The seven 2″ thick sheets of under-slab insulation shown above will save a lot more energy when spread across seven houses than when put in one thick pile below one house. It’s not a perfect takedown, however, because those other six houses probably aren’t going to get that insulation anyway. If they do, the contrast is different.

According to an update on Twitter by my friend Peter Troast, Dr. Wolfgang Feist responded to the idea of climate-specific passive house standards by saying that the physics is the same everywhere so having a single, uniform standard is fine. It’s certainly true that physics doesn’t change, but conditions change, needs change, and cost effectiveness changes. If it were really so simple, why would ASHRAE and building codes put so much effort into developing climate zones? (Jim Meyers in Colorado made that point on Twitter yesterday, too.)

So another edition of the North American Passive House Conference has come and gone. (Another conference this year, unfortunately, adopted the same name PHIUS has been using for nine years. I’m sure Martin Holladay will be writing about that one soon since he was there.) A lot of the great building science minds were at the conference in California, and I got to go, too. It was nice catching up with old friends like Dan Perunko, Gavin Healy, and J. West (who gave a great Judas Priest karaoke performance!) and meeting a lot of new folks. It was also nice to see Bronwyn Barry of the North American Passive House Network there and meet her in real life for the first time.

The venue was great! We were right across the water from the San Francisco airport, and I watched with amazement as planes took off and landed without hitting the seawall and skidding across the runway. I did see one Korean Air jet get to within 100 meters or so of the ground and then pull up and abort that attempt. Not sure what happened but they landed safely about 10 minutes later. There was much more to the conference than I’ve covered here, of course. Kat Klingenberg gave a broader overview in her blog recently. One thing she covered that I didn’t was Bill Rose’s opening keynote. He gave a sweeping review of how we got here and discussed activism, the Vietnam War, and even managed to work in a bit about abortion, making the point that we need to be able to discuss rationally things that aren’t easy to talk about. He also touched on one of my favorite topics, peak oil, and reminded me that I need to bring that back into my presentations.

The PHIUS staff deserves a lot of praise for pulling this off because organizing and running a conference this big takes a lot of work. I appreciate the long hours, late nights, and early mornings they put in.

I’d especially like to thank Kat Klingenberg. Without her, there might be a little bit of passive house activity in North America, but I doubt it would be anything like what we have. Now we’ve got two organizations, two conferences, a lot of activity, and some serious innovation happening. I don’t know all the details about what happened leading up to the split with PHI, but I do know that I’ve been thoroughly impressed with Kat. She understands the issues. She works hard. And she’s willing to admit when she’s made a mistake.

The passive house movement is probably the most exciting area to work in the field of building science. When you push out to the edge to see just how far you can go—or should go—it’s possible to make progress that could hardly be imagined before.

See you in Chicago next year!

5 Reasons to Attend the Passive House Conference in California

All images by Energy Vanguard except sketch of slab insulation, which is by Martin Holladay of Green Building Advisor.