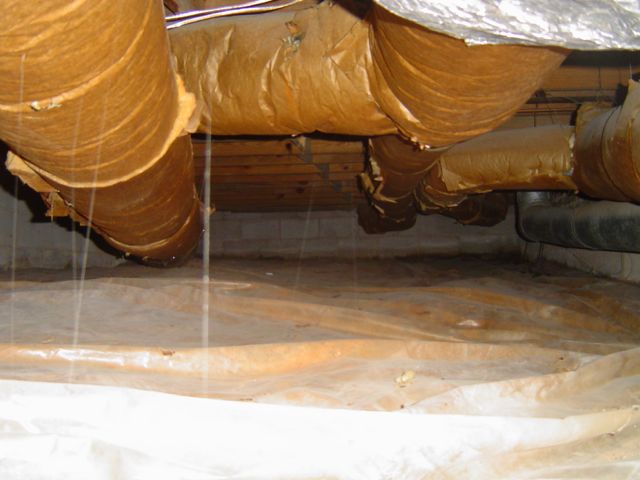 When I started Energy Vanguard in 2008, I didn’t know how it would evolve and had thought early on that I may get back into home performance contracting. I did a couple of jobs, the last one being a crawl space encapsulation for my friends Tony and Gabriella. They had a house over a moldy crawl space, and Gabriella had developed a cough since moving in. When I inspected the crawl space, it seemed an excellent candidate for encapsulation, but on the day I arrived to start the work, I discovered a water mystery that I had to solve first.

The photo above shows a shot of the crawl space. The back corner on the right side was dry when I had done my inspection, but on the day I arrived to start sealing it up, that corner was full of water. It was raining pretty hard outside and had been all night.

With standing water in the crawl space, I couldn’t begin work. You never want to encapsulate a crawl space if there’s a bulk water problem because water under the plastic will find ways to get on top of the plastic. It’s meant as a vapor barrier, not a liquid barrier. Ideally, you get rid of the water by stopping it from coming into the crawl space. If you can’t do that, you need a drainage system and perhaps a sump pump to handle it.

So, we started searching for the source of the crawl space water. My first target was the outside of the foundation wall right there where I discovered the water. It was on the right side of the house. I went outside, dug down into the dirt there, and found that it was dry. The water definitely was not coming through there. Where the heck was it coming from? We walked around the house looking at everything. In the front was the large camellia bush you see below. If you look closely at the photo, you’ll see the culprit. You also can see that it was still raining pretty hard when when I was doing my detective work. Behind the camellia bush was a downspout. The downspout came down to a small strip of soil between the house and where the driveway stopped. Someone in the past had connected a downspout extender but it had come loose, so most of the water was dumping right there in that little strip of soil next to the house. And that strip of soil was dripping with water. The really interesting thing here was that part of the house was on a slab. My sketch of the floor plan below shows the layout. The water was traveling under the slab to get back into the crawl space! The driveway actually had a lot of slope down to the street, but in this case the water—or at least enough of it to cause a problem—found an easier path to the crawl space.

We reattached the downspout extender, and I made sure to screw it securely to the downspout this time. The corner dried out. We finished encapsulating the crawl space. The indoor air quality improved. And Gabriella breathed easier.