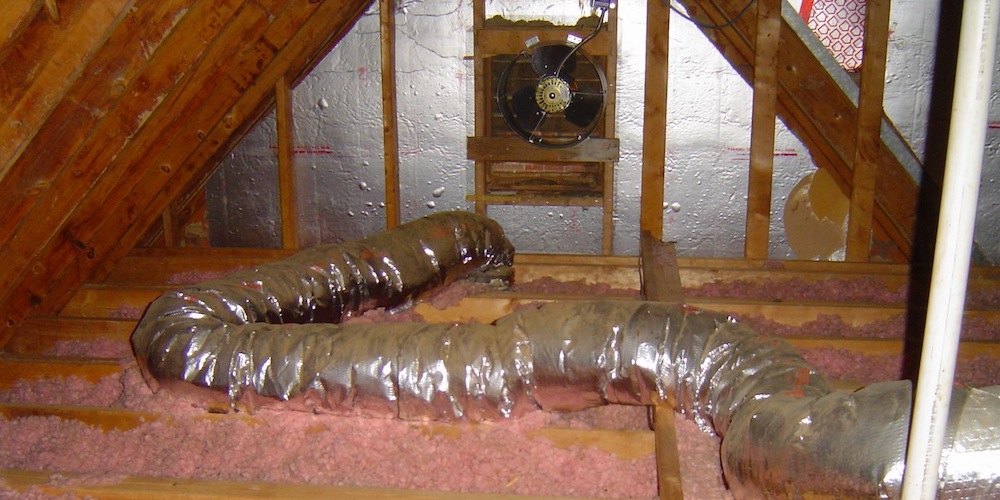 Three years ago I wrote an article titled, Don’t Let Your Attic Suck – Power Attic Ventilators Are a Bad Idea. Nearly a hundred thousand page views and 93 comments later, it’s still generating lots of heat. I don’t know why so many people are so defensive about powered attic ventilators, but here are a few of the things they’ve said to me in the comments:

Common Sense!!!! is in the building world, you really ought to check it out sometimes.

I challenge you to a battle of applied knowledge in this field any day, it’s people like you who make people who need an attic fan second guess themselves out of speaking with a true professional.

Oh, and let’s not forget: “You just are not getting it lady that it’s not just the cooling effect we are after here.” Yesterday I got another one so clever and witty I was at a loss as to how to respond:  “Ok… I’m going to say it because no one else will… Allison Bailes, you’re an ASS!! :-)”

It makes me feel so much better that he used that smiley face at the end. ;~)

In my original article, I focused on makeup air. That is, I said that when you run a powered attic ventilator in a typical house, yes, it will cool the attic down. A significant amount of that cooling is likely to come from conditioned air being sucked up from the house below. Most ceilings aren’t air-sealed well, so putting a negative pressure on the attic will do that. I quoted Peter Yost in the earlier article, and in the comments, David Butler made a similar remark:

“In a particular home, if a PAV truly reduces cooling costs enough to pay for itself (don’t forget to consider the energy the fan consumes), then that tells me there are issues with ceiling insulation and/or attic venting.”

That’s as true today as it was three years ago when I wrote the first article. And it’s part of the reason that my state, Georgia, has banned powered attic ventilators (unless they’re solar-powered, which was a concession needed to get the grid-powered fans banned). But there’s really a more fundamental reason that powered attic ventilators won’t help a lot, and for some reason, I didn’t mention that in the original article.

How does heat get into the attic? Well, it starts at the Sun and radiates down to the rooftop. We make sure that most rooftops can soak up as much heat as possible by using asphalt shingles. They’re dark-colored. They’re granular. And many roof surfaces are tilted toward the Sun for enhanced absorption.

That heat then conducts down through the roofing materials. The underside of the roof deck can get very hot, so hot you can’t keep your hand on it. At temperatures of 150° F or more, that’s a lot of heat sitting there in that plywood or OSB. Some of it will go directly into the attic air by conduction, but that’s a small amount because air isn’t a good conductor.

The main way that heat gets into the attic is through radiation. That hot roof deck radiates heat down into the attic. But that radiant heat passes through the attic air and hits the solid materials. It gets absorbed by the framing, insulation, the stuff you’re storing up there, and, unfortunately, any ductwork and HVAC systems that are up there.

Those materials heat up. They give up most of their heat by conducting it downwards into the house or into the ductwork and HVAC system and then into the house from there. Some of that heat gets into the air above the hot materials on the attic floor, but the attic air getting heated up is a secondary effect. See it now? Here it is:

Using a fan to blow hot air out of the attic doesn’t address the radiant heat flow from the roof to the attic floor. Much of that heat then conducts downward and finds its way into the house.

Trying to solve the heat gain problem in your attic by using a fan is like lying out at the beach with a fan blowing over you and thinking you’re not going to get a sunburn.† A radiant barrier would be a better way to attack this problem, but their cost effectiveness is marginal.

Regarding this point, Danny Parker wrote in a literature review of attic ventilation, “Detailed simulations suggest that the heat transfer in an attic to a residential building interior in mid-summer is dominated by radiative gains from the hot roof decking directly to the insulation surface. This mode of heat transfer is more effectively limited by 1) increased attic insulation, 2) a truss-mounted radiant barrier or 3) a white reflective roof surface that limits solar gain to the attic structure.”

I’ve been in lots of attics. I’ve seen lots of powered attic ventilators, including the one in the top photo. That one was hooked up at one of the gable vents. The other 7 fans in that attic were spread across the roof, and they were naturally fighting against each other. There’s no way there was enough open vent area in that attic to supply all 8 of those fans at their rated capacity.

In another home, I found three powered attic ventilators in the roof. We had been called in to solve a mold problem in two of the bathrooms, and those three fans turned out to be the main problem. We turned them off and the negative pressure pulling humid outdoor air into the bathrooms has gone away.

Addendum: What to do instead of using a PAV

If you’ve got a vented attic that gets hot in the summer, your first option is leave the attic vented and make sure the ceiling is air-sealed and insulated as well as possible. If you’ve got an older home and it needs more insulation, you’ve got the perfect opportunity. By removing the old insulation, you’ll expose the ceiling. That’s your air barrier, and it’s probably not doing a good job at it. Here are a few articles that can help:

Mind the Gap – Air Leakage at the Top Plates

Once you get the ceiling sealed up, then and only then are you ready for more insulation. You could get a blower door test to make sure you’ve got it airtight. When you’re really ready for insulation, you’ve got three choices: batts, blown, or sprayed. Another option is to spray foam on the roofline. It’ll be more expensive, and you’ll need to think about a ventilation plan for the house as well as treating the attic air to prevent moisture from collecting in the foam.

† My friend Mike Barcik gets credit for this analogy, except that when he tells it, you’re lying naked in the sun. Naturally, this being a family blog and all, I don’t talk about naked people here. (Don’t be scared; you can click the link without leaving the Energy Vanguard website and without seeing anything indecent. And no – that’s not me in the photo.)