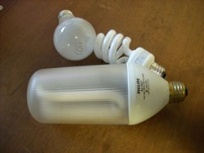 Have you heard? Incandescent light bulbs will be phased out, beginning in 2012. This was part of the Energy Independence and Security Act of 2007, signed into law by former President Bush. The ban targets general purpose light bulbs that produce 310–2600 lumens of light output. The first to go will be the 100 watt bulb, in 2012.

Have you heard? Incandescent light bulbs will be phased out, beginning in 2012. This was part of the Energy Independence and Security Act of 2007, signed into law by former President Bush. The ban targets general purpose light bulbs that produce 310–2600 lumens of light output. The first to go will be the 100 watt bulb, in 2012.

The two main candidates for replacement that meet the efficiency requirement of 30% better than incandescent bulbs are compact fluorescent (CFL) bulbs and light emitting diode (LED) bulbs. Since incandescent light bulbs turn 90% of the electricity you’re paying for into heat, 30% better still isn’t all that great. Fortunately, both CFLs and LEDs do much better than 30%. I’ll come back to LEDs in a future article, but let’s take a closer look at CFLs today.

CFL bulbs have been around for a while now. In fact, I bought my first CFLs in 1992, and they still work! That’s one of them in the photo above (the big one in the foreground). CFLs use about 25% of the energy of incandescent bulbs, so when you replace that 100 W incandescent bulb, put in a 25 W CFL, and you’ll get about the same amount of light – about 1700 lumens. Those numbers yield light bulb efficiency ratings (called efficacy) of 17 lumens per watt for incandescent bulbs and 68 lumens per watt for CFL bulbs.

Some people complain that the light quality isn’t as good and don’t want anything to do with CFLs, but I think this is mainly because they don’t know how good CFLs are now. Yes, there are certainly low quality CFL bulbs available, but if you compare apples to apples, it’s a rare person who can identify CFLs by their light quality only and not just by the shape of the bulb. And speaking of the shape of the bulb, the CFL bulbs are all pretty boring. They’re either a spiral or a U shape. Today, I discovered a new one (photos directly above and below), thanks to that great green building consultant and lobster artist, Doc Brudzinski. They’re called The Plumen and currently available only in Europe. What do you think? My first thought was, Wow! Why didn’t someone do this a long time ago? My second thought was, when can I get some?

Another complaint against CFLs is that they contain mercury. When replacing incandescents with them, though, this is a non-issue if your electricity comes from burning coal. Maybe you aren’t aware of this, but coal-burning electric power plants put A LOT of mercury into the atmosphere. From there, it rains down, contaminating soil and water and bioaccumulating in fish. Also, the mercury is contained in the bulb, so as long as they don’t break, there’s no problem. Just dispose of them properly. (Home Depot, Lowe’s, and Ikea all accept them for recycling.)

I’ve just scratched the surface here, so look for more about lighting in future blog posts.