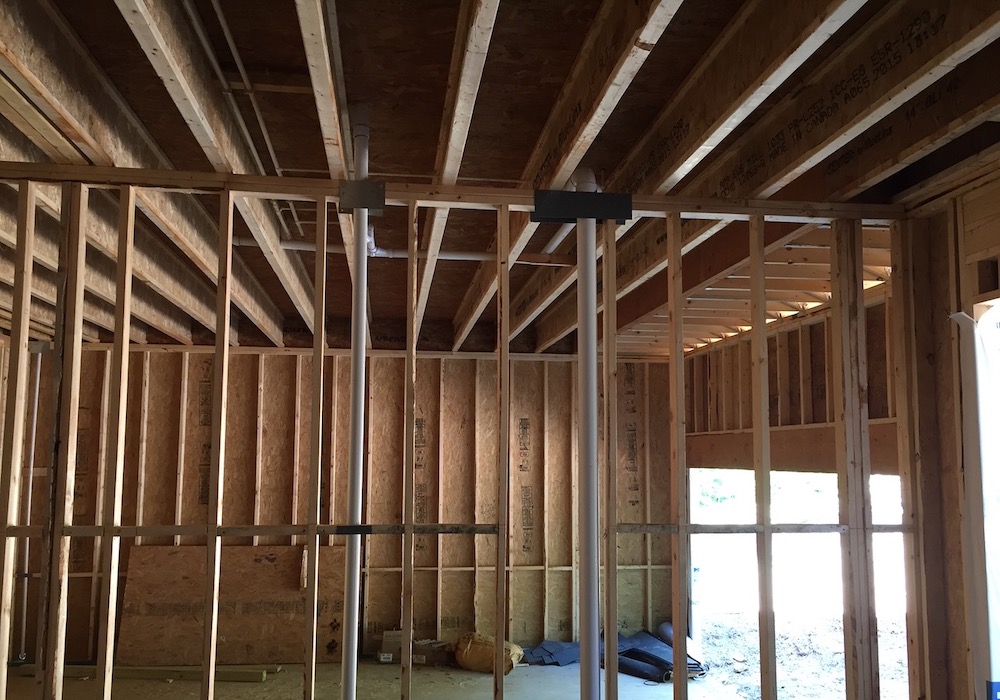 Take a look at the photo above. See anything missing? If you don’t see it yet, look at the big opening at the bottom right of the photo and you should be able to deduce what that room is. It’s a garage. Now look at the framed wall between the garage and the inside of what will be the living space, which is where I was standing when I took the picture. You see it, right?

Because the ceiling framing there is done with I-joists, it’s not a simple matter to do the blocking and air sealing required here. Yes, it can be done, but it’s going to be extra work.

Also, when I visited the house, they didn’t have the ducts installed yet. If they make the mistake of running flex duct through those joist cavities, their air-sealing job just became magnitudes more difficult. Yeah, you can sort of do it, but it’s not gonna do a great job.

But the thing that gets me when I see this is that it could have been avoided. If instead of having joists running right across that wall they had run the framing the other way, they could have a solid piece of wood there. Seal the edges and penetrations and you’re done. They also could have kept the joists running the same direction but not made them continuous. Just butt them into a perpendicular joist on top of that wall.

Unfortunately, few homes have detailed framing plans, and many of those that do have them don’t get reviewed for this type of problem. This failure of design makes extra work for the builder.

Building Enclosure Blunder in the Basement

Are You Making These Mistakes with Your Garage?