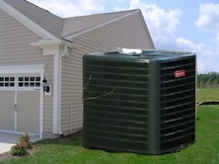 So the typical system’s too big, as you can clearly see in this photo I took in Texas on a recent trip. (And that’s just the AC for the garage!) Turns out, an oversized system is good, in a perverse way.

Why? Because the typical duct system is too small, has too many kinks, is made up of too much flaccid flex, and just generally can’t handle all the air from the oversized system. In many cases, though, it moves enough air to keep the house comfortable. It also provides some cushion, or elasticity, so that the HVAC contractor can get away with installing it that way and having it work OK, sort of.

Why this doesn’t fly with high-performance homes

In a high-performance home, the system is designed to be as close to the right size as possible. That means the ducts have to be designed and installed correctly, too. But the thing is, there’s not much buffer in this case. The cushion and elasticity are minimal here so that the system can do its job as well as it can. That means evening out temperature spikes and removing more moisture in humid climates.

What happens in a high-performance home if the design has an incorrect assumption in one place? Or if the flex duct wasn’t pulled as tight as it should have been? Or when the contractor doesn’t use rigid elbows? Or the builder uses wood grilles, with their much lower air flow?

I’ll tell you what happens. That system that was supposed to live happily on the good side of the razor’s edge slips onto the underperforming side, and it’s a bloody mess. How do I know? We do HVAC design here, and we’ve had a couple of cases where these things have happened.

Thou shalt commission thy ducts! The thing is, the distress of unhappy homeowners can be avoided easily by spending a few hours commissioning the system to make sure not only that the equipment is working but also that the duct system is moving enough air.

If you’re an HVAC contractor and you’re not already commissioning every air conditioning system you install in a high-performance home, you’re going to face those callbacks. To avoid that, you may need to add some tools and techniques, but the heartache—and money—you save later on will make it worthwhile. Here’s what you need to do with every system:

If the house is going for certification in the ENERGY STAR new homes program, all this stuff, and more, is required now that Version 3 is out. Not every high-performance home you come across is in a program like this, however, so it’s just a good policy to understand the nature of your projects and protect yourself from future heartaches by doing it right from the beginning.

Yeah, it’s more work than you may be used to doing as an HVAC contractor, but I can tell you one thing. It’s a heck of a lot better to do these things before the happy new owners move into the house, though. Before their smiles turn to frowns.