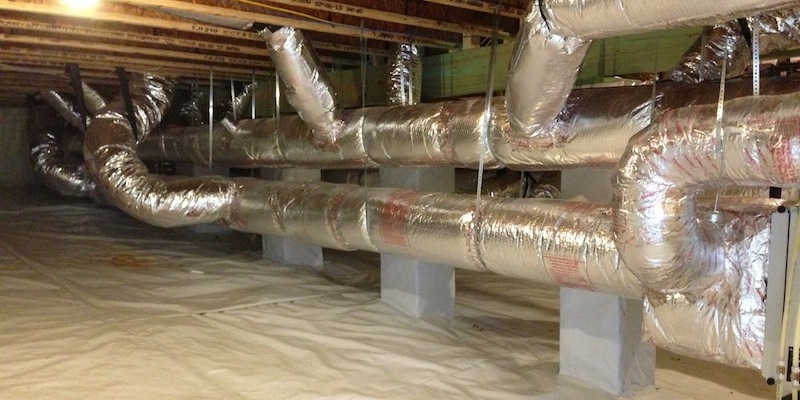 If you have a home with a crawl space—or are building or buying one—you have several options on what to do with that particular foundation type. Most crawl spaces are vented to the outdoors, but over the past decade, encapsulating the crawl space (as shown below) has gained favor among builders of green and energy efficient homes. It’s often seen as the best way to eliminate the moisture problems that often result from vented crawl spaces. But what do you do about the air down there?

Before we address that question, however, let me point out that encapsulated crawl spaces are great for humid climates, like the Southeastern US. In a dry climate, it may or not be worth the cost to encapsulate. So, as always, do what’s most suitable for your climate.

Basically, your options are to do one of the following:

Let’s take a look at each of these methods.

1. Vent the crawl space to the outside

Do this in a humid climate, and you’re asking for trouble. The outside air that you bring into the crawl actually has more moisture in it than the crawl space air you’re venting to the outside much of the time. Although the psychrometric chart shows mathematically why it doesn’t work, a look into just about any vented crawl space in the Southeastern US proves that venting to the outside is often a disaster. The photo above is from a house that was only a year or two old. Although the home builder had installed closed cell spray foam insulation in all the above-grade walls and the attic, he left the crawl space vented to the outside. The result was mold growing on the HVAC system.

Let’s just say this is your worst option unless you’re in a dry climate and quickly move on to the better choices.

Conclusion: This is your worst option in humid climates. It’s probably also worst for most climates if the HVAC systems and ductwork are located in the crawl space.

2. Supply air from the HVAC system

If you encapsulate the crawl space, adding a little bit of air from the HVAC system is probably the most common method used. If there’s already a duct system down there, it’s easy and inexpensive to do. The air from the system helps to dry out the crawl space air. In Advanced Energy field tests, the small crawl space airflow causes a negligible pressure effect that is far exceeded by the effects of duct leakage, stack pressure or wind-induced pressures in the building.

Conditioned air supply sized to deliver at a rate equal to 1 cubic foot per minute (0.47 L/s) for each 50 square feet (4.7 m2) of under-floor area, including a return air pathway to the common area (such as a duct or transfer grille), and perimeter walls insulated

If you go this route, it may work well in the summer if the air conditioner is sized properly. If the system runs long enough, it can provide enough dry air to the crawl space to keep the relative humidity below 70%, where you want it.

In the swing seasons, however, and in homes with oversized air conditioners, this method may not work well. Another thing about this method that I’m not crazy about is that you’re conditioning the crawl space based on the conditions in the finished space above. The crawl space has its own conditions, though, and may or may not respond well to controls in another place.

Conclusion: Although it’s the most common method of treating the air in encapsulated crawl spaces, it may or may not work well.

3. Exhaust air to the outside

First, note that I’m not talking about the crazy idea to put large fans in the crawl space to exchange large quantities of air between the outdoors and the crawl. (Yes, companies really do promote this, and it’s a quick way to rot the wood in your crawl space.) I’m talking about a small exhaust fan, as described in the IRC. Here’s the language from the code:

Continuously operated mechanical exhaust ventilation at a rate equal to 1 cubic foot per minute (0.47 L/s) for each 50 square feet (4.7m2) of crawlspace floor area, including an air pathway to the common area (such as a duct or transfer grille), and perimeter walls insulated

So a 2000 square foot crawl space would need a 40 cfm exhaust fan. It’s pulling just a little bit of air from the crawl space. The problem is that you don’t really know where the makeup air for the crawl space is coming from. Yes, the code specifies a pathway for air to move into the crawl space from the house, but air doesn’t always follow those arrows in the diagrams. If the band joist isn’t sealed well, for example, it may pull a lot of the air from outdoors, which isn’t really what you want.

Conclusion: It could work but is probably less reliable than supply air from the HVAC system. In this method, you use a standalone dehumidifier for the crawl space. (Again, we’re talking about encapsulated crawl spaces only; although some people try, you can’t dehumidify the whole outdoors.) It’s controlled by the conditions in the crawl space, not the house above, so this method will do the best job of keeping the crawl space dry.

Brad Brinke of The Crawlspace Company in Virginia Beach responded to my question about this topic on our Facebook page: “We have a very good track record with the dehumidifier here in Virginia. We install a humidistat and fan system to help the dehumidifier operate efficiently. We tried using supply air from the home and it did not work.” (See the full discussion here.)

If you want dry air in your crawl space, a dehumidifier is the way to go. Yes, they do have drawbacks. You have to buy additional equipment. They require maintenance. If the drain fails, you may have a bulk water problem in the crawl space.

If it’s a small crawl space, a standard dehumidifier that you can buy for $200 to $300 may be sufficient. For medium to large crawl spaces, however, it’s best to go with a more robust model, like the ones made by Therma-Stor. Their Santa Fe line is made for basements and crawl spaces. The photo above shows an older Santa Fe model made just for encapsulated crawl spaces.

Conclusion: Although more expensive, installing a dehumidifier is the best method for treating the air in an encapsulated crawl space.

Should you connect the crawl space to the house with a transfer grille?

Both of the quotes from the building code that I mentioned above include the following language:

What they’re saying is that if you pressurize the crawl space with supply air or depressurize it with an exhaust fan, they want the crawl space to be able to communicate with the house above to relieve the pressure. The easiest way to accomplish this is with a transfer grille right in the floor, as you see below. Advanced Energy isn’t a fan of this method, instead recommending that the entire floor be air sealed to isolate the crawl space from the house. There are some good reasons for this. If, for example, the intent of the opening is for house air to move downward (as in the case of the exhaust fan), the stack effect may win out if the crawl space isn’t perfectly sealed to the outside.

Another potential problem is pollutants in the crawl space air migrating into the house. These could be soil gases such as radon or fumes from paints, pesticides, or fuel stored in the crawl space. Also, if the crawl space access door is left open, it may not be discovered for some time. Meanwhile, the house is directly connected to the outside through that transfer grille.

Is it ever OK to install a transfer grille? Sure. In the house where I took the photo above, there’s no access to the crawl space from outside, and the owner doesn’t store hazardous chemicals down there (unless you consider wine hazardous).

The best way to deal with the air in a crawl space is to encapsulate it and install a dehumidifier. Adding supply air from the HVAC system is tricky and may let the crawl space humidity go too high in spring and fall.

Now, go out there and turn those nasty crawl spaces into clean, dry mini-basements!
Allison A. Bailes III, PhD is a speaker, writer, building science consultant, and the founder of Energy Vanguard in Decatur, Georgia. He has a doctorate in physics and writes the Energy Vanguard Blog. He also has a book on building science coming out in the fall of 2022. You can follow him on Twitter at @EnergyVanguard.