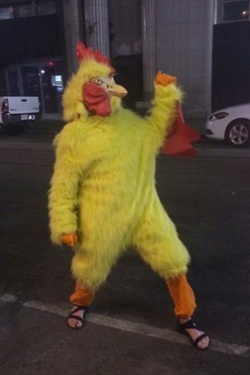 I love the ACI National Home Performance Conference! This year’s conference was spectacular. It was in New Orleans, which is always fun. The stars of home performance were there. The Californians came back. (That’s one of them in the chicken costume below. ACI after dark, which even has its own Twitter handle, @ACIafterdark, is fun no matter where the conference is, but wild things can happen in NOLA.) And perhaps best of all, Michael Blasnik revealed data from the Nest thermostat for the first time.

I love the ACI National Home Performance Conference! This year’s conference was spectacular. It was in New Orleans, which is always fun. The stars of home performance were there. The Californians came back. (That’s one of them in the chicken costume below. ACI after dark, which even has its own Twitter handle, @ACIafterdark, is fun no matter where the conference is, but wild things can happen in NOLA.) And perhaps best of all, Michael Blasnik revealed data from the Nest thermostat for the first time.

OK, I’ll jump straight to the most exciting part. Michael Blasnik is one of the smartest people I know. He consulted on the Nest thermostat when it was under development. A year or so ago, he went to work for Nest (now Google). Last year he said he was hoping to get the Nest folks to let him present some of the data this year, and he was successful. On the second day of the conference, he showed 60 graphs of data that raised more questions than they answered. He covered heating setpoints, air conditioner runtime, indoor relative humidity, and much more. This should have been a plenary session, or at least in a much bigger room. I got there half an hour early because I knew it would be packed, and it was.

I’ll have a whole article on some of the results tomorrow. Don’t miss it!

One of the best things about ACI is the people. As I mentioned above, the stars of home performance show up for this conference every year, people like Dick Kornbluth, Linda Wigington, Gary Nelson, John Tooley, Tamasin Sterner, Rick Chitwood, and on and on. The ASHRAE 62.2 committee, as always, had a bunch of members in attendance, too. (The photo below is a view of the packed room for the Stump the Chumps session, moderated by Chandler von Schrader, left.)

But this conference isn’t about the stars. It’s about turning all of us into stars of home performance. It’s about learning and sharing and growing the industry. It’s about weatherizaton and building science and making new connections. When you put home performance contractors, program managers, and low income/affordable housing specialists together, great things happen.

My friends, the award winners!

Another really cool thing about this conference is that my great friend from Maine, Peter Troast of Energy Circle, won the Tony Woods Award. The annual award goes to someone “demonstrating extraordinary dedication to and activism in the home performance industry,” I can vouch for Peter’s creds on this. He wrote a very nice article on his thoughts about receiving the award, which you might want to read, too. Congratulations, Peter! (That’s a picture of the two of us below as we were heading off to summer camp in 2012.) In addition to Peter winning the Tony Woods Award, three more of my friends were recognized. Devon Hartman received the Linda Wigington Leadership Award for his amazing work in the Community Home Energy Retrofit Project, CHERP. Also, Bill Spohn and Jim Gunshinan were selected for inclusion in the BPI Hall of Fame. Read more about Bill and Jim along with the third winner, Leticia Colon de Mejias, in Home Energy Magazine’s announcement. Congratulations to all of you!

And then there was New Orleans. There was no lack of things to do in the evenings, and we were right downtown in the heart of the city. Some of the best food in the world is there. Bourbon Street was a big draw. (I personally am not fond of it because it smells so bad, but the other streets in the French Quarter are nice.)

When you’re wandering around New Orleans late at night, you stumble on all kinds of interesting places. One night we saw a little opening between two buildings that led back to a tiny little bar called The Dungeon. I wonder how many others at ACI found it.

The folks below somehow found a costume shop that was still open at 2 in the morning, and, well…you can see what happened. That’s four of the Californians plus a DC guy (he’s easy to spot) in the photo below. This morning as I was looking at the photo of them modeling their costumes, I noticed those little balls on the ceiling. And I remembered that that guy in the tutu (Dan Thomsen of Building Doctors) made something that looked just like those things. Back at the 2012 ACI conference, he broke out his BreezeBuster at one of the ACI-after-dark parties, and I’m wondering if maybe they bartered their way into those costumes. (Sadly, I was asleep while those shenanigans were happening.) Next year’s ACI conference is in…

Austin, Texas! If you couldn’t make it this year for whatever reason, don’t miss next year’s conference. (And yeah, I’m looking at you, KI, SS, EW, CL, and AC.) Austin may not be as wild as New Orleans, but it’s a great conference town.

I don’t know why the chicken went to the ACI conference, but maybe I’ll come up something. In the meantime, feel free to leave your thoughts on the matter below.

I do know why the chicken crossed the Möbius strip, though. Do you? (Answer below related articles.)

ACI 2011 – A Mad Review of THE Home Performance Conference

Why did the chicken cross the Möbius strip? To get to the same side!