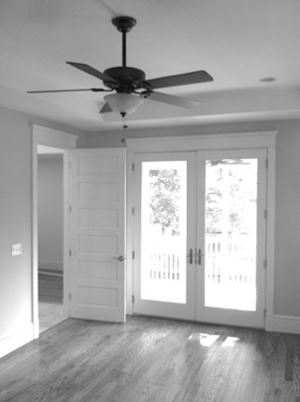 Ceiling fan manufacturers now have to label their boxes with the efficiency rating—called efficacy and given in cubic feet per minute of air movement per watt of electrical power input (cfm/watt). I wrote about this a couple of years ago, and one of the points I made in that article was that larger fans have higher efficacies. That’s not the only factor, of course, but all else being equal, efficacy increases when you increase the blade length.

What that means, if you’re looking for a fan that does its job as efficiently as possible, is that you should get a bigger fan than some of the boxes recommend. To make matters even more confusing, the ENERGY STAR page on ceiling fan sizing recommends installing smaller, less efficent fans than you really should. Here’s their sizing chart:

Another brand that comes close is Aeratron, with its  E502-SL and E503-SL models. They come in at 608 to 655 cfm/watt on low speed and 357 to 383 cfm/watt on high speed. [Also see John Semmelhack’s comment below for another high-efficacy ceiling fan.] If you download the ENERGY STAR ceiling fan spreadsheet, you can see the numbers for all the ENERGY STAR certified ceiling fans. If you’re on a budget, however, and don’t care at all about efficiency or aesthetics, you can always do what these folks did.