Accidental dehumidification is happening on that window above because the glass and metal are colder than the dew point. If that happens occasionally, it's not such a big deal. If that window stays wet long enough, it can start rotting the wood around the window and growing mold.

But hey, at least you can see it there. A more insidious form of accidental dehumidification happens inside building cavities. In the winter time, the air inside your home is more humid than the outdoor air.

The condensing surfaces are — or should be — closer to outdoors. If you've got good double-pane windows and insulation in your home, the colder parts of the building are on the exterior side.

So let's say water vapor from indoors gets into a wall cavity. Let's say that wall cavity is filled with insulation that doesn't stop air movement, like fiberglass, cellulose, or mineral wool. That's how most walls are insulated after all.

What happens when the water vapor gets through to the exterior side of that wall cavity? Unless the house has insulation on the outside of the sheathing, that sheathing (plywood or OSB usually) is going to be cold when it's cold outdoors. It's likely to be a condensing surface.

If enough water vapor gets into the wall cavity, you can have some serious accidental dehumidification going there. That can result in rot and mold and indoor air quality problems. Not a good thing! It's also in a hidden place, so you won't see it like you do on the window.

The physics makes it pretty clear what to do, right? Here are your options:

In short, you can reduce the amount of water vapor, you can keep the water vapor separated from the condensing surfaces, or you can eliminate condensing surfaces with exterior insulation. Which you choose to do depends on your situation, but the first option is usually the least preferable. You don't want the indoor air to be too dry. 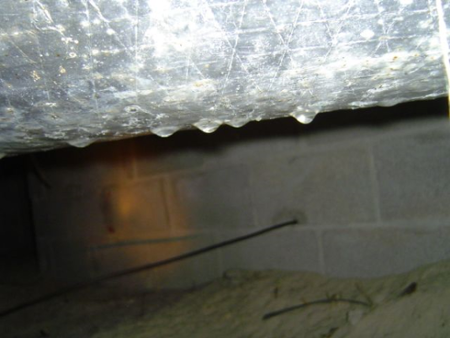 Thanks to Terry Brennan, James Cummings, and Joseph Lstiburek for the term, accidental dehumidification. I was reading an article of theirs titled Unplanned Airflows & Moisture Problems on the plane the other day and that was one of the things they discussed.

We've all seen condensation on a glass of water and ice. Now install one of those foam beer cooler jackets and no condensation. Then how about a porous insulator around the glass where you can see the condensation at the glass to insulation boundary.

It is relative,where and how you live. Climatic information and changes can make a difference. By having a portable humidistat in your home, will not condense your indoor air quality and information, but expand it! Where and how you live is significant, a lot of U.S. experts talk too much and create humidity. talking, cooking and showering. Which reminds me in the dry climate of Denver CO, that it is time to stop my dry sense of humor and hit the shower and get ready to get to work, thanks for sharing and caring about thermal dynamics, so we don't have to sweat it!

Thanks Allison. Although simple and straightforward, I'm always able to glean useful tidbits.

Dennis, sounds like your relative humor hit the pun point this morning. Cheers!

I'd love to get thoughts/suggestions: Humidity (as per hygrometers around the home) is appropriate relative to the outdoor temp, using Minnesota recommendations as a guide.

Windows are double-pane casement style, probably from 1990s. Most mornings there is condensation only on the lowest 1"-2" of glass, but it stays there all day unless I wipe it off. This is causing mold problems. The exceptions are windows with no shades or obstructions, which means no screens or shades.

Thank you in advance.

I think we too often think only about the temperature gradient across assemblies and forget that surface temperatures can be effected too. I use to live in a 1920's house with single pane windows. I would only get condensation on the windows with storm screens (condensation on the storm window) but not on ones with just a single pane of glass. My theory is that the indoor air was warming the inside face of the glass to just above the dew point. On the other windows the storm glass was staying below it and the air leaking into the separation was condensing. It's possible that your windows overall on the surface are above but close to the dew point but something is dipping the bottom section to just below it.

Similarly, the worst offenders are windows with honeycomb or fiberglass light-blocking shades, even if they're not directly above a baseboard heater. Removing most screens and keeping shades at least partially raised has made a very big difference!

Allison--great article! Like you, we've seen condensation on the inside of windows in winter. We've also seen it on the outside of those windows in summer--a sure indicator of thermal bridges in the window. And you're spot on, getting wood wet leads to rot and mold.

Other options for the windows is to replace them (with a better window) or heat them (heating windows does not reduce energy consumption!). Oh, as you point out, if the condensation is occurring within the wall, replacing or heating windows will not help!

To prevent this from happening in the walls, a basic and passive solution is to simply eliminate air cavities within the walls - we do this by entirely encapsulating (injecting) closed cell urethane insulation into all wall cavities. When you eliminate air pockets caused by traditional building methods, and virtually eliminate thermal bridging from the outside, you eliminate the opportunities for failure with the building envelope for any number of systemic issues.