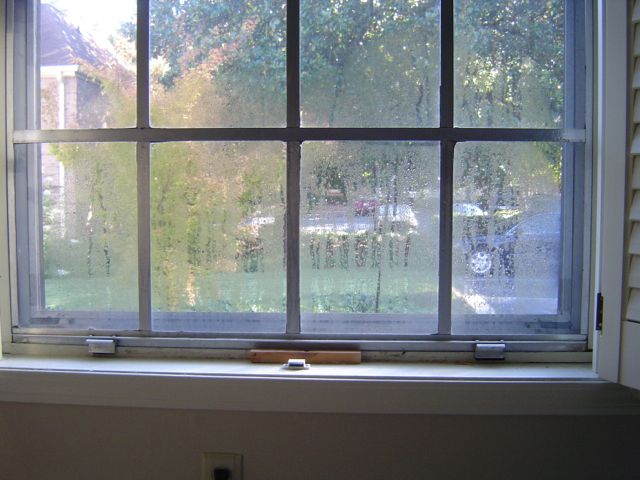 Accidental dehumidification is happening on that window above because the glass and metal are colder than the dew point. If that happens occasionally, it’s not such a big deal. If that window stays wet long enough, it can start rotting the wood around the window and growing mold.

But hey, at least you can see it there. A more insidious form of accidental dehumidification happens inside building cavities. In the winter time, the air inside your home is more humid than the outdoor air.

The condensing surfaces are — or should be — closer to outdoors. If you’ve got good double-pane windows and insulation in your home, the colder parts of the building are on the exterior side.

So let’s say water vapor from indoors gets into a wall cavity. Let’s say that wall cavity is filled with insulation that doesn’t stop air movement, like fiberglass, cellulose, or mineral wool. That’s how most walls are insulated after all.

What happens when the water vapor gets through to the exterior side of that wall cavity? Unless the house has insulation on the outside of the sheathing, that sheathing (plywood or OSB usually) is going to be cold when it’s cold outdoors. It’s likely to be a condensing surface.

If enough water vapor gets into the wall cavity, you can have some serious accidental dehumidification going there. That can result in rot and mold and indoor air quality problems. Not a good thing! It’s also in a hidden place, so you won’t see it like you do on the window.

The physics makes it pretty clear what to do, right? Here are your options:

In short, you can reduce the amount of water vapor, you can keep the water vapor separated from the condensing surfaces, or you can eliminate condensing surfaces with exterior insulation. Which you choose to do depends on your situation, but the first option is usually the least preferable. You don’t want the indoor air to be too dry. Thanks to Terry Brennan, James Cummings, and Joseph Lstiburek for the term, accidental dehumidification. I was reading an article of theirs titled Unplanned Airflows & Moisture Problems on the plane the other day and that was one of the things they discussed.