The old shack above has been around a long time.  It still looks good in its old age, but you'd probably have to pour a lot of money into that building to make it useful again. 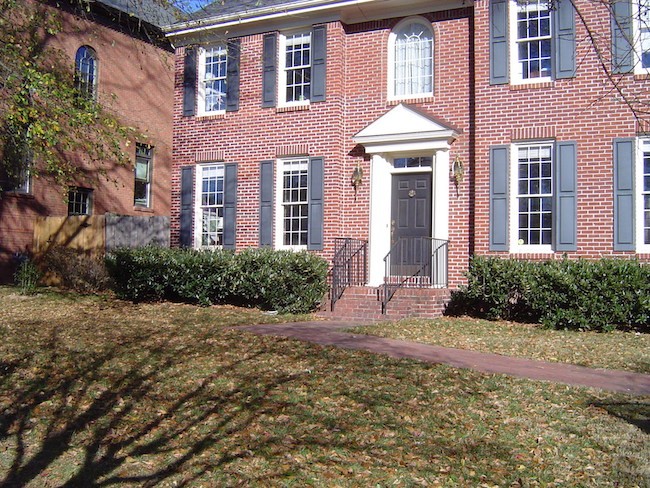 This home looks nice.  It doesn't appear to be all that old.  The inside was nicely decorated and the family I met there in 2006 seemed happy with it.  Despite that, one of the owners told me she had been told that, just because of the neighborhood they were in, their house was a good candidate to become a teardown.  Yeah, it seems crazy, but real estate values different things than real people do. 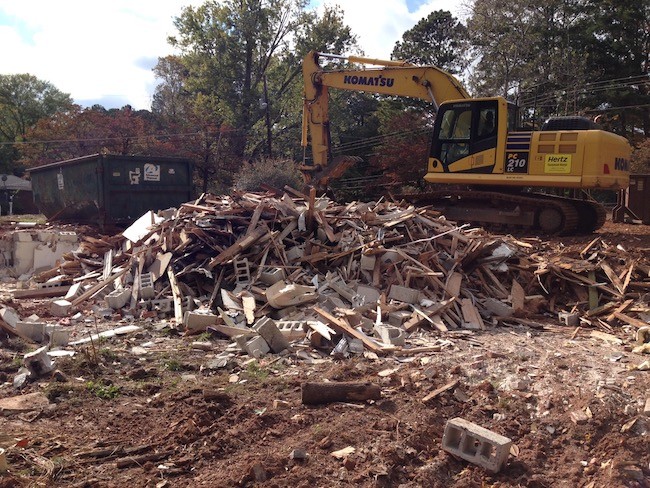 That pile of rubble is not the previous house.  But it was somebody's house at some time.  From the outside, it didn't seem to be in a terminal state of decay.  It just happened to be in the wrong place at the wrong time and became another teardown. 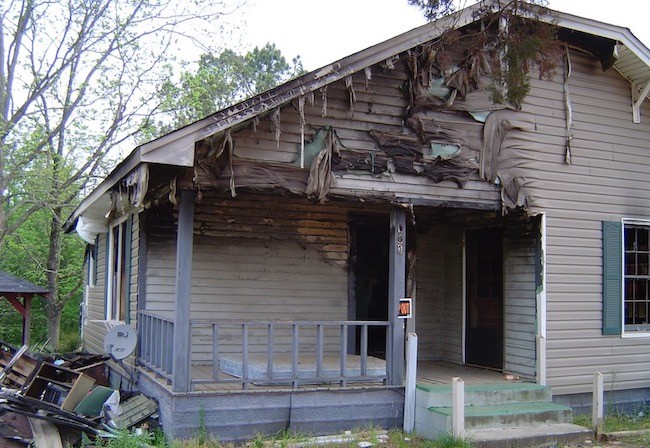 Some houses die more catastrophically.  Fire, of course, is an easy way for them to go.  And water.  Just ask the people who lost homes in hurricanes Katrina or Harvey or Michael or...

Why do we improve homes then?

If buildings aren't permanent, why bother making them better?  Why worry about duct leakage and infiltration and the efficiency of the heating and cooling systems?  That house we improve may burn down or be torn down before the investment becomes justified, right?

We may never know how long any building will last or how useful it may be while it's still standing, but we work to improve them nevertheless.  Buildings represent investments of time and money and materials.  We don't want to squander those investments.

Buildings account for about 40% of energy consumption and the greenhouse gas emissions that go with that.  They use the great majority of all the electricity generated.  We also spend about 90% of our lives in buildings.

Buildings provide shelter, yes, but they also do much, much more than that.  They provide comfort.  They're places where we raise families.  We keep our stuff in them.  We work on projects there.  We entertain.  We educate.  We have a lot of emotion associated with buildings.  My grandparents house was a very special place for me as it was indelibly tied to the feelings of love and security I felt there.

So, despite not knowing how long a particular building will last, we have plenty of reason to improve buildings.

Buildings aren't permanent...and neither are people

One year ago today, Mike Rogers died of cancer.  He was 54. 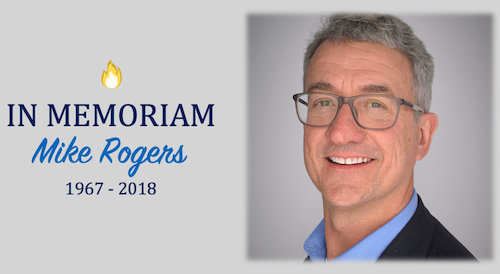 I knew Mike for nearly a decade.  He was big person with a big personality and an even bigger heart.  You can read a tribute to Mike in Home Energy magazine (pdf) and another one by Amy Beley at Pearl Certification.

Mike was absolutely dedicated to the mission of improving homes.  I don't know of anyone more dedicated than he was.  He didn't know cancer would take him out at the relatively young age of 54.  And when he did get cancer and the treatment didn't get rid of it, he still worked tirelessly to make sure his message got out. 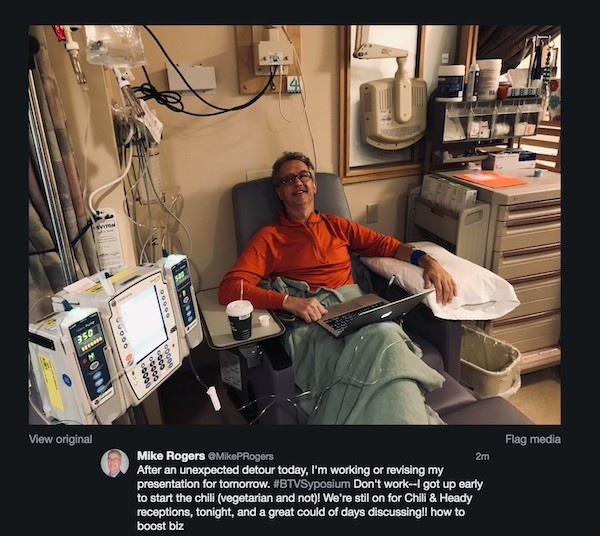 As you can see, he was working from a treatment center the day before he held a two-day symposium for home performance contractors.  He followed that with a day hike to the top of a mountain near his home in Burlington, Vermont.  Jeffrey Sauls of Energy Vanguard was privileged to be there and can attest to the strength of Mike's work and convictions.  Here's a photo of the hike, with Mike in the orange hoodie. 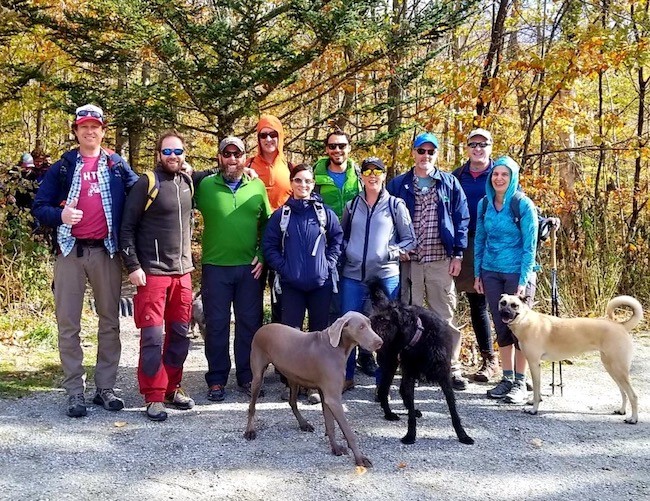 Speaking of hikes, Mike also was quite the accomplished hiker, doing some really technical hikes in Grand Canyon especially.  Check out his blog on those hikes, Mike's Hikes. 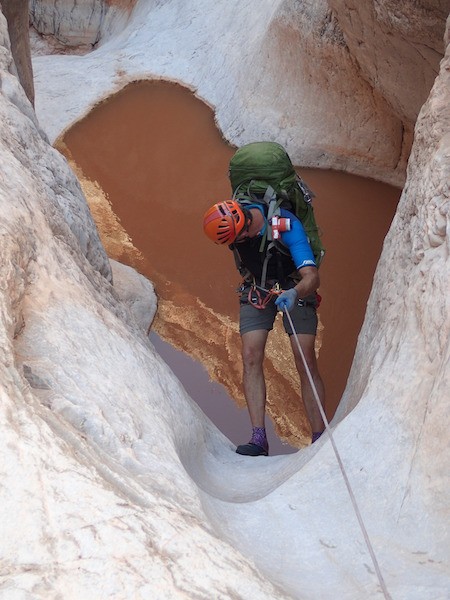 Buildings and people have finite lifetimes.  We don't know how long any particular one will last or how its life will end.  All we know is that we have this present moment to be with them.  We can choose to use this moment getting angry at someone for cutting us off in traffic or saying something we don't agree with.  Or we can instead watch the immediate reaction and then respond with love.

Cancer can be cruel and arbitrary, but we don't have to be.  We can be as focused and dedicated as Mike as we make our way to whatever kind of end we face, whenever it might come.

An appeal:  Mike's passion was educating contractors who go out and improve homes.  You can help extend his work by donating to the Mike Rogers Memorial Scholarship Fund.  I did.

Love Is More Important Than Building Science — A Thanksgiving Story

I got to know Mike through LinkedIn's Energy Efficient Construction forums. I was always impressed with what he had to say and closely read any comments that he made. We were supposed to connect when he made one of his trips to my home state of Maine, but individual circumstances unfortunately always seemed to prevent that from occurring. Age slows us all down and it has certainly done that to me, but I figured Mike would be around for some time yet. I will miss Mike as I am sure will many others.

Mike, thanks for all you gave us!

Thomas, yes, age slows us all down and we tend to assume the people we know and interact with will always be there.  But the number certainty in this life is that it's going to end.  For some, that happens many decades after birth.  My grandfather made it to 96.  Some die very young.  Mike made the most of his years on this Earth.  I hope people will people will say the same about me.

Love it, way to put it all in perspective Allison. Mike was a great guy and lived life to the fullest!

Thanks, Alex.  Yes, Mike certainly lived life to the fullest, even if that meant a late-night emergency room visit because of some over-enthusiastic dancing.  ;~)

Thank you for these words and memories Allison. It feels unbelievable that he has already been gone for a year. This is a great reminder of the impermanence of today and how important it is that we do good with the time we have. To Mike: we miss you very much, friend.

You're welcome, Bethany.  I had originally planned to do a tribute article shortly after he died, but time got away from me.  I hadn't forgotten about doing that, though, and when I saw recently that the one-year anniversary of his death was coming up, I figured that would be a great time to write the piece.

Mike may be gone but he's far from forgotten.  His mission and his passion live on through all of us still doing the work.

Recently saw an article about disposable buildings and how our tax system does not actually cover the true costs to cities over the true life of the building. They estimate that taxes, including corporate, would have to increase by about 500% to cover long term replacement and repair of roads, sewers, utilities etc etc etc. In addition, many buildings are built with only a 15 year life expectancy. Now THAT's waste.

The loss of Mike will be felt for some time; hope many he inspired will attempt to fill his professional shoes. I think he would really like that.
As per houses, they are ALL designed with a limited lifetime too - usually 50 years (even less for major pieces like roofs, kitchens, baths) despite what the National Board of Realtors says. Adding to that 99%+ are only built to the local building codes at that time and it really begs the question - why not plan for complete replacement at designed end-of-life?

Thank you for a lovely tribute for a lovely man, and a reminder to put life's issues into context. Mike had a large, joyful spirit that lives on.

Beautiful tribute to Mike. Through - in retrospect, miraculous - luck I was privileged to have known him in the last year of his life. He was generous, kind, and wickedly smart, and a master of strategy. I'll never forget him opening the first day of the Symposium with a patch on his eye. And the astonishingly delicious beer, yet another of Mike's passions, shared with abandon, while he focused like a laser with all of those convened to help us scale this [expletive deleted] paradox of a problem: Making and keeping buildings that celebrate the spirit of who we - humans and the earth together - can become. Mike was and continues to be a bright North Star for the work we do. Shine on, Mike! Shine forever!

I think about this often. I know that one day my brand new house will no longer be. It's sad but inevetable.

What if stick built homes were assembled with screws and gaskets rather than nails, staples, and glue? Structural screws are much stronger (even at shear) than nails. And perhaps it would allow homes to be 'disassembled' rather than 'torn' down?

What a Great Article! I didn't know Mike I don't think, but I would bet he would be a huge fan of post consumer styrofoam ICF blocks to make houses and light commercial last for centuries with little to no upkeep...come what May! All while decreasing HVAC utility bills by 90% or so! Hopefully we can get a plant going here in Atlanta ASAP and then spread it to every medium size city in the South, East Coast, World! Solving more than just affordable housing but what to to do with the insidious single use styrofoam!

I think of Mike often, his influence was large in my life. Not so much with our industry - although he surely was a rain maker, but more as buddy to share IPAs, oysters and hiking trips. I could tell you stories of his tomfoolery that would make you want to jump in with a like story. When you were with Mike you were in for something memorable - either sharing a presentation on HPwES or nearly dying while hiking the Grand Canyon! I'm now an avid backcountry hiker - something that really took off with Mike. Whenever my boots hit the trail I always have warm thought of Mike - shit, I miss him big.
Thanks to Peter for starting this thread...