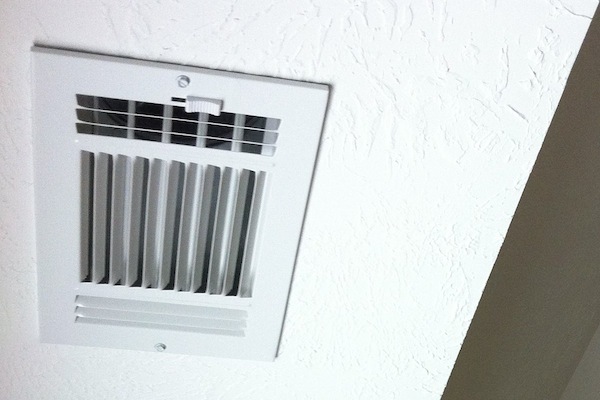 But then what? We don’t just turn on the BTU spigot. We typically move those BTUs into and out of the rooms in a house with a fluid, like air or water. So how do we know how many cubic feet per minute (cfm) of air will give us the right number of BTUs per hour? Today we’re going to talk about this relationship between BTU/hr and cfm. (I’m going to leave the discussion of using water for heat distribution to my friends on the hydronic side, but it’s analogous to what I’m explaining below.)

Before we get started, let me note that there’s a little bit of math ahead. It’s really not that bad, and if you can follow along, you’ll have a better understanding of the physics behind moving heat with air. If you’re already hyperventilating after seeing the word “math,” you can skip down to the takeaways section.

How much heat can air hold?

Matter is pretty neat stuff. It has all kinds of interesting properties that have kept scientists hidden away in laboratories for centuries. (I hear that Galileo is still toiling away in the basement of the Leaning Tower of Pisa.) When talking about the capacity of air to hold heat, the relevant property is called — you’re not gonna believe it — heat capacity. Yep. It’s a term I’ve mentioned occasionally in this space but never really defined, so let’s take care of that today.

Heat capacity is kind of like efficiency. It’s a bang-to-buck ratio. With efficiency, the equation is output over input. With heat capacity, it’s a ratio of the heat added or removed to the temperature change. Here’s the equation:

It’s usually easier to talk about specific heat capacity because the Q in the equation above will change with different amounts of air, the substance of interest here. By dividing the right side of the equation above by the mass of air, we get the specific heat capacity. If we rearrange a little using the magic of algebra, we get an equation you may recall from high school or college. (It shows up in introductory classes of both physics and chemistry.) Here it is:

Look familiar? If not, hang with me just a little longer and I’ll show you an equation you may have seen before.

The next step is doing a little conversion for the mass term. When we deal with fluids, it’s usually easier to work with density, which equals mass divided by volume. So we replace the m term above with density (Greek letter rho, ρ) times volume (V). Here’s what our equation looks like now:

Whether the math is causing you to hyperventilate or not, let’s step back a second and recall where we’re going here. The original question was about how we take heating and cooling loads in BTU/hr and determine how much air flow we need in cfm. We’ve got a term in the equation now for volume and cfm is just volume over time. One of the great things about algebra is that we can divide (or multiply) both sides of an equation by the same thing. In fact, it’s encouraged!

So let’s divide both sides of the above equation by time. On the left, we end up with Q/t, which gets us to the BTU/hr we’ve been discussing. On the right, the volume, V, divided by time gives us cubic feet per minute. Of course, to end up with BTU per hour on one side and cubic feet per minute on the other, we need to throw in a factor of 60. It goes on the right side.

Also on the right side, we have ρc, the density of air times the specific heat of air (at constant pressure, but that’s another discussion). Density and specific heat are just two numbers we can multiply, and just to be clear, we’re talking about air at sea level and near room temperature. You can’t use the equation below up high in the mountains or at temperatures far from the air you’re breathing right now. When we multiply density (0.075) by specific heat (0.24) and also by 60, we get 1.08. The final equation looks like this:

This is the equation I said you may have seen before. It’s taught in HVAC programs and BPI classes as well as other places. If we rearrange this equation to get air flow on the left, we end up with:

And there we have it. Once we know how much heat a room needs to have supplied or removed, we can do a simple calculation to see how many cubic feet per minute of air flow we need. Of course, the cfm we need will depend on the location. You can’t just use 1.08 everywhere, as I said above. And we also need to know how much the temperature of the air changes when it goes through the furnace or air handler, the ΔT in the equations above.

I know what some of you are thinking now. You’re looking at all that I’ve done above and you’re saying to yourself, that’s sensible. And you’re absolutely right. The equations above are only for the sensible heat added to or removed from air. It doesn’t include the latent heat part of air conditioning, the part that deals with moisture removal.

We could go back to the beginning and go through a similar process for the latent heat removal. Heck, we could go even further back and talk about the partial derivative of enthalpy with respect to temperature. But how about I spare you those details and give you the answer right up front. Here’s the analogous equation for the total heat (sensible plus latent):

Doing a little algebra magic again, we get the equation for cooling cfm:

The only thing new here is the Δw variable. That represents the change in humidity ratio, and the gr subscript is for grains. Humidity ratio (often mistakenly called absolute humidity) is one of the main variables on a psychrometric chart and is measured in grains of water vapor per pound of dry air. The grain is a weird way of talking about the mass of water vapor, with one pound (mass) of air being equivalent to 7,000 grains.

Basically, Δw measures the change in the amount of water vapor in the air moving through the air conditioner when some of it condenses on the cold evaporator coil. When air passes over a cold evaporator coil, two things happen. The air temperature drops (ΔT) and the concentration of water vapor in the air also drops (Δw) as the water vapor condenses on the coil. Both of those changes are part of the cooling capacity of a piece of equipment.

If you got lost in the math up above and jumped down here, let me see if I can summarize things a bit for you. I started by looking at the physics involved in air flow and heat. That was all based on the definition of heat capacity, which is a measure of how much temperature change you get in a material for a given amount of heat added or removed. That resulted in the pair of equations that relate the three variables, BTU/hr, cfm, and ΔT. There’s a number (1.08) in the equation, too, and although it looks like a constant, it’s not. You have to remember to adjust it if the density of air isn’t the same as air at sea level near room temperature. (The heat capacity can vary, too, but for what we’re doing here, it’s mainly the density you have to adjust.)

Then I showed that those two equations are only for sensible heat; that is, the heat that causes temperature changes. If you have moist air (and who doesn’t want that!) and are cooling it, you also have to consider the heat involved in removing water vapor from the air stream by condensing it on the cold air conditioner coil. That led us to the second pair of equations, which includes that heat, the latent heat.

If we had to start from first principles and do all the physics every time we design a heating and air conditioning system, we’d probably just be sitting around the fire in winter or fanning ourselves with palmetto leaves in summer. Instead, we have procedures for taking load calculation results and getting the right piece of equipment that moves the right amount of air with the right number of BTUs. That’s the engineering side.

So, you have the answer to the original question. We know how to go from a BTU/hr heating or cooling load to the cfm of air flow needed to meet the load. The heart of it is pure physics. The design process is engineering, and that’s the topic of a future article.

Heat Is a BTU-tiful Thing!