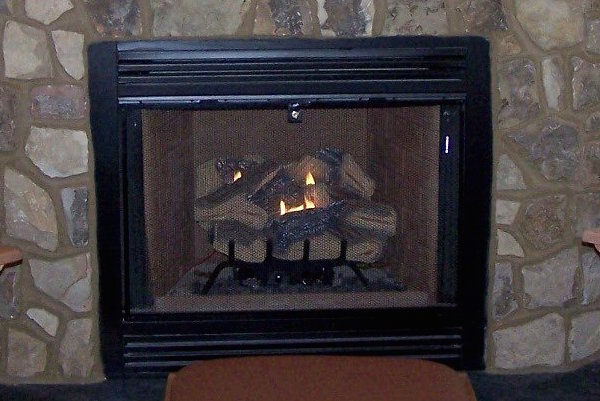 One of the primary benefits of an unvented gas fireplace is that you don’t lose any heat up the flue. That’s because there isn’t a flue, of course. That’s one of the main reasons supporters of unvented gas fireplaces use to sell a product that’s banned in California and Canada. “Hey, 100% beats 95%!” (The potential problems with indoor air quality and moisture, however, outweigh any benefits so don’t run out and buy one just yet. Or ever. Don’t fall for the hype.)

But let’s examine the facts. Yes, even the highest efficiency condensing furnaces still lose some heat in the exhaust gases that go up the flue. And 100% efficient really does sound better than 95%, although both are good. So does that mean unvented fireplaces are more efficient than condensing furnaces?

Let’s take a look at the efficiency values for these two heating appliances. Before we get to them, though, let’s talk about the standard furnace: the 80 AFUE induced draft furnace. AFUE stands for annual fuel utilization efficiency and is the percent efficiency, averaged over a year. We see a lot of that type here in the Southeast. When the gas gets burned in one of these furnaces, 80% of the energy in the gas gets transferred to the air moving through the furnace, which then goes into the conditioned space. 20% of the heat goes up the flue. A high-efficiency, condensing furnace does much better. They start at about 92%, although most condensing furnaces these days are 95% and higher. We did a quick search on the AHRI Directory this week and the highest efficiency model we found comes in at 97.7%. When you look for the efficiency of unvented gas fireplaces, you see claims for 99% or 99.9%. (For purposes of this article, let’s just say it’s 99.9%.) That number is so high because, as I said at the beginning, none of the heat is escaping up the flue.

Based on those numbers, it looks like the unvented gas fireplace (also called euphemistically ventless or vent-free) is the winner. Not many people† would dispute that 99 is a bigger number than 97.7. But there’s a hidden problem here. We’re comparing apples to oranges when we compare 99% to 97.7%.

Here’s why. Both the unvented gas fireplace and the condensing furnace have a combustion efficiency of nearly 100%. That means almost every one of the methane molecules combines with two molecules of oxygen, producing one molecule of carbon dioxide, two molecules of water vapor, and some heat.

The unvented gas fireplace keeps all of that heat in the house, which is how they claim 99.9% efficiency. The only loss is from the little bit of incomplete combustion that happens. But there’s something missing here.

In that combustion reaction, there are three products: carbon dioxide, water vapor, and heat. What’s lacking in the efficiency rating for the unvented gas appliance is the latent heat of the water vapor. And that’s where the name of the condensing furnace comes in. That water vapor has a lot of energy in it. When it condenses, it gives up heat. In a condensing furnace, there’s a secondary heat exchanger whose purpose is to condense the water vapor and capture that heat.

So, let’s introduce a couple of new terms here. When we talk about natural gas as a heating fuel, it has two different heating values. The Lower Heating Value (LHV) is the amount of heat you get from the combustion and from bringing all the combustion products back to the original temperature without condensing the water vapor. That’s what’s being used in the 99.9% efficiency rating for unvented gas fireplaces.

The Higher Heating Value (HHV) has three components: (1) the heat given off during combustion, (2) the heat regained by bringing the combustion products back to the original temperature, and (3) the heat that comes from condensing the water vapor. And that’s what the efficiency of condensing (and standard 80 AFUE) furnaces is based on. (The Wikipedia page on heat of combustion has a good explanation of lower and higher heating value.)

I’m a very fortunate blogger. I find interesting things to write about in the world of building science and have attracted some very smart readers. Some of them post comments that add a lot to the discussion at hand or raise new topics to discuss. That’s the case here.

When I wrote about the first law of thermodynamics in November 2017, RoyC posed the topic of this article as a little quiz in the comments. I thought I knew the answer but turned out to be wrong. I had assumed that a 99.9% efficient unvented gas fireplace would be more efficient than a 95% condensing furnace. But RoyC is a smart guy with a heck of a lot of engineering experience and knowledge, and he helped me see the bigger picture here.

So, when you read articles here in the Energy Vanguard Blog, don’t skip the comments. Not only could you learn something new, but you might also get a preview of a future article.

† I say “not many” here because there are three kinds of people: those who can do math and those who can’t. But hey, sometimes being bad at math pays off.

How Can Replacing a Furnace Make You Less Comfortable?