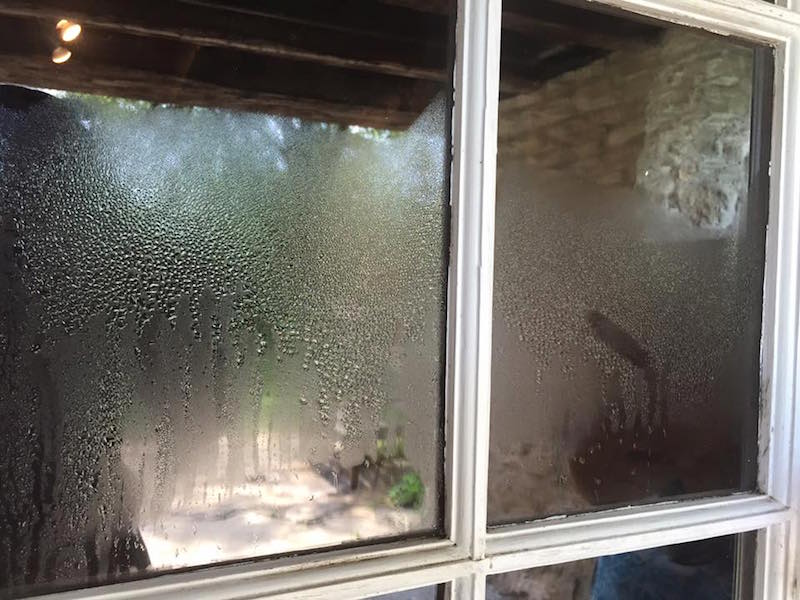 In Missouri for the ASHRAE conference, I took some time to visit with my Cajun baby sister the other day. As we were making our way to one of the local wineries outside of St. Louis, we saw a sign for Daniel Boone’s house. Now who can resist that? So we took the short detour and spent a few minutes there. (Yes, minutes. There was wine at the wineries after all.) And here’s what I saw there.

Window condensation is usually an indoor humidity problem. Most people think of it as a winter problem when the windows get are cold because it’s so cold outside that the water vapor in the indoor air rushes to those glass surfaces. But dew point works both ways.

For humid climates in the summer, the humidity is outdoors. When you air condition the indoors, as Daniel Boone was wont (but unable) to do when he built this house back in 1810, the cold surface and the water vapor are on the outside of the window. In this case, the outdoor temperature was about 95° F and the dew point was about 75° F. What does that tell you about the window? The lesson here is that if you’re a frontiersman in a humid climate, as Boone was, you need to do one of two things. Either you need to forego the air conditioner, or you need to install better windows. Those cool, single pane windows are a water magnet, as you can see above.

Also interesting is that the condensation doesn’t completely cover the panes of glass in the window. Perhaps the cold air from the vent indoors was hitting only part of the glass. Or perhaps something outdoors was warming one part of the glass more than the rest.

In any case, if you see condensation on the outside of your windows at 1 o’clock in the afternoon, be aware that you, like Daniel Boone, have a dew point problem. Condensation in a humid climate is a good thing…if it’s on the coil of an air conditioner or dehumidifier. If it’s on the windows in summertime, you’re probably paying too much for air conditioning.

Window replacements most often aren’t cost effective, but that doesn’t mean you can’t improve them. One product I like for this application is the Indow Window insert. They’re interior storm windows you hardly notice.