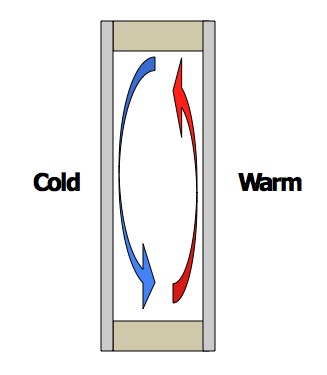 You may have heard somewhere that insulation works by trapping air. ‘Dead air pockets’ is the operative term often used. So, the logical next question, then, is, why doesn’t the large dead air pocket in an uninsulated wall cavity reduce heat flow as well? Having spent several years of my life living in older houses that had no wall insulation, I can confirm for you from personal experience that uninsulated walls really do transfer more heat, not less.

One answer lies in the size of the dead air pocket and has a good, sciency name attached to it – convective loops. If you’re thinking about your middle school science class and the three forms of heat transfer – conduction, convection, and radiation – you’re on the right track here. Although radiation is the dominant form of heat transfer in an uninsulated wall, convection, as illustrated below, is also important.

When the warmed air hits the top of the cavity, it starts collecting there. Some of it moves over and is in contact with the cold side of the wall. Following Homer Simpson’s command (“In this house, we obey the laws of thermodynamics”), heat moves from warmer bodies to cooler bodies. That’s the second law of thermodynamics.

So, the heat picked up from the warm surface now gets lost to the cold surface. As the air cools, it gets heavier again and starts falling, losing more heat along the way. At the bottom, it pools and eventually finds the warm surface again, where the cycle is renewed.

When you put insulation in that wall, you break the convective loop process, and then radiation and conduction are responsible for most of the heat transfer, but radiation is reduced, too. The net effect is that a lot less heat flows from the warm side to the cold side, and the house stays more comfortable.

There you have it. With dead air pockets, size matters – and smaller is better.