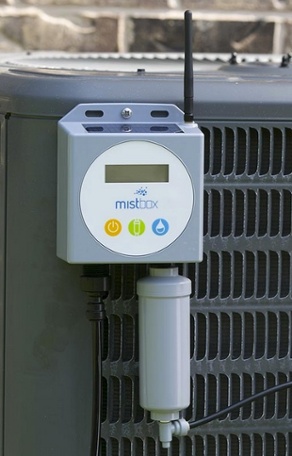 This time of year, air conditioners are running like mad to keep people cool in their homes. Here in Atlanta, we’ve had a couple of weeks of hot, muggy weather, with a little break on Sunday. Now we’re heading back to the mid-90s with high dew points again. As a result, some people are starting to dread those air conditioning bills arriving and wondering what they can do to save energy. Is the Kickstarter-funded Mistbox the answer?

Evaporative cooling is great. It’s how our bodies keep cool when it’s hot. We sweat. The sweat evaporates and that phase change carries heat away from our bodies because it takes heat to turn liquid water into water vapor.

When you spray a mist of liquid water into the air, the tiny droplets of liquid can evaporate into individual water vapor molecules. Again, it takes heat to do that, and in this case the heat comes from the air. The result is cooler air. If you live in a dry climate, you may even use this principle to cool the air in your home with a device called a swamp cooler.

Now, let’s take that principle and apply it to your air conditioner. I’ve explained how air conditioners work in a previous article, collecting heat from inside the house and dumping it to the air outside the house. Because the outdoor air is hot, the compressor has to make the refrigerant that carries that heat even hotter than the outdoor air because heat always flows from hot to cold, or in this case, hotter to hot.

If you can evaporate water into the air right before it gets pulled into the condensing unit, you can decrease the temperature of the air and thus increase the capacity and efficiency of your air conditioner. Then, instead of dumping that heat from hotter to hot, you’re dumping it from hotter to not-quite-as-hot, and that’s easier to do.

The photo at the top, from the Mistbox website, shows the setup for this new device. You connect the box to your outdoor faucet with the hose supplied. The water goes into the box and gets turned into a mist on all four sides of the condenser. As the liquid vaporizes, the air cools and helps the air conditioner run better.

It’s got controls to determine when it operates, and here’s what their website says about them: “Temperature. Sound. Magnetic field. Mistbox senses these to mist at exactly the right time.”

The Mistbox connects to wifi as well, and naturally there’s an app so you can track how it’s doing on your smartphone.

The Mistbox folks think highly of their product, as attested to by these quotes from their website:

“Mistbox is computer optimized and its algorithm continually improves to maximize savings.”

“Mistbox is smart. It learns from its environment – your unique climate & AC system.”

“Mistbox starts saving you money from the very first day. It usually pays for itself in the first full season of use, and you could save thousands in cooling costs over its lifetime.”

But is it really all they make it out to be?

Why you should be skeptical

The principle of evaporative cooling is sound. The application is a bit tricky, though. Here are a few reasons why you may not get the kind of benefits they promise.

1. What about outdoor humidity?

The computer optimization and continually improving algorithm are all well and good, but why doesn’t their website give a single hint that they look at the outdoor humidity, too? The website says the controls are based on temperature, sound, and magnetic field. In the app settings, the user chooses a temperature trigger but there’s nothing for humidity.

For that mist to evaporate in the air, however, the wet bulb temperature has to be lower than the dry bulb temperature. Ideally, the two numbers are significantly different. The closer those two numbers are to each other, the more of that Mistbox water will be wasted. In other words, the Mistbox should work great in a dry climate but not as well when the outdoor humidity is high.

2. What about indoor humidity?

The Mistbox website touts the energy-saving benefit of less runtime. In a humid climate, that’s not necessarily a good thing. Removing humidity from the indoor depends on how much the air conditioner runs, so when you reduce the runtime, you may end up with high indoor humidity. (Caution: Putting the AC thermostat in the fan-on position will make it worse.) How much sense would it make to save a little bit of money on your air conditioning costs only to have to install and run a dehumidifier that you didn’t need before?

3. Can it really pay for itself in one season?

To make it less hypothetical, I did some simple payback calculations for my condo. Over the last three summers, we’ve averaged $212 in air conditioning costs. (That’s not per month. That’s for the whole cooling season, May through October.) If I saved 40% with the Mistbox, it would take 5.3 years to pay for itself. At 20% savings, the payback doubles to 10.6 years.

But wait! That doesn’t account for the annual filter replacements or the cost of the water used. (See next section for my discussion of water usage.) The filter costs $30. My conservative estimate for the cost of water, using my local water rate of $2.16 per 1000 gallons, is $50 per cooling season. (Yes, really!) That puts the simple payback at:

Those numbers don’t look so good for a piece of equipment whose expected lifetime is 15 years.  (Yes, they’d look a little better if I used the $315 cost they quote on the website. They arrived at that cost by assuming a 30% tax credit because the device’s electronics are powered by a small photovoltaic module. I think it’s an iffy proposition to try to take that tax credit for the full $450 because the tax credit is for solar electric generation, which is certainly a small part of the cost of the Mistbox. The proof of that is that they also sell an auxiliary solar panel for $30.)

Oh, and don’t forget, your payback doubles if you have to buy two Mistboxes and triples if you need three.

The Mistbox comes with a filter to help reduce the effects of scale building up on the air conditioner coil from minerals and crud in the water. It probably works fine, at least when the fitler is clean. But what about dirt picked up by the mist from the outdoor air? If someone is cutting the grass or blowing leaves near the AC while the Mistbox is running, you’re gonna get crud in the coil. The more crud builds up on the coil, the lower the air flow will be and the less efficient the AC becomes.

5. How will it effect refrigerant pressure?

By adding extra cooling to the condensing coil, it’s unlikely but possible that you could reduce the pressure of the refrigerant to the point where you end up with less cooling indoors, not more. The other four factors above are more likely to cause trouble, but this one could be an issue for some folks.

How much water does the Mistbox use?

So how did I come up with $50 for the cost of water over a whole cooling season? I didn’t do the calculations myself. I asked an engineer who works for one of the large HVAC manufacturing companies about this device, and here’s what he told me:

“Assume that we have a 3-ton AC unit with an outdoor airflow rate of about 2800 cfm, which is typical for a 14 SEER system.  Let’s also assume that it is 95 F dry-bulb and 75 F wet-bulb temperature outdoors, which is a common design condition for air conditioners.  If we look at the psych chart, we can see that if we spray water in front of the coil, we can theoretically cool that air to 75 F dry-bulb by following a constant enthalpy or wet-bulb line to the saturation curve.  If you do a water vapor mass balance on this evaporative cooling process, you can show that you will need about 32 gallons per hour of water for this process.  That is not an insignificant amount of water, but lowering the inlet temperature by 20 F is quite a benefit.  Is it worth it?”

So, under those conditions, the Mistbox would use about 32 gallons per hour. On a design day here in Atlanta, the air conditioner in my condo runs about 5 hours. Assuming the Mistbox isn’t on the whole time, my conservative guess is that it would run 3 hours per day, using about 100 gallons per day. That’s 3000 gallons per month or about 15,000 gallons per cooling season. At our local rate of $2.16 per 1000 gallons, the cost would be $32.40 for the season.

But any water that doesn’t completely vaporize and passes through the coil is wasted. And many air conditioners have greater runtime than ours does. Also, water rates vary and are generally increasing, so I think $50 per year is a reasonable, conservative estimate for water use by the Mistbox.

It would be nice if Mistbox actually published their water use data. I know they must have some, and the fact that they don’t publish it makes me think my numbers may be too low.

Is it worth it?

My first thought when Bill Spohn alerted me to this product was about Southface‘s attempt to do this a few years ago. David Wasserman is an engineer at Southface who oversaw the project, so I asked him for an update. “The water misters at the Eco-office,” he wrote to me, “did not operate much since we could never get the controls to work properly. They have been removed.”

The anonymous engineer I mentioned above wrote about the maintenance aspect: “Cooling towers and evaporative condensers are common on commercial and industrial systems where trained service people are available to maintain them. Homeowners are generally not willing or able to perform or pay for this type of maintenance.”

The HVAC industry is ripe for disruption, but I haven’t seen anything yet that’s going to shake things up. The Mistbox, like the smart-vents that allow occupants to do their own zoning, is bound to be another disappointment to most homeowners. If you’ve got high bills from using a central air conditioner, your best bet is to fix the problems with it, not buy some Kickstarter gadget that has its own mobile app.

Psychrometrics, Part 2 – The Quantities in the Chart