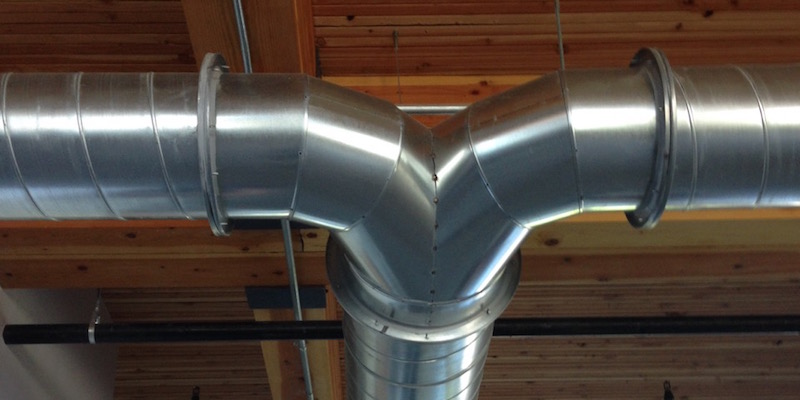 It’s obvious that moving air too quickly through ducts can be a problem.  Faster air means more turbulence, more resistance, and more noise.  But I run into people who think that low velocity also can be a problem in ducts.  Just recently I heard someone talking about how low velocity causes “rolling air” in the ducts.  I don’t know what he meant by that (turbulence?), but is low velocity really something we should worry about?  And if so, when?

I’ve written about the relationship between velocity and duct size before, so let’s do a quick look back at this important principle.  The diagram below shows equal volumes of air in two parts of a duct system – one smaller, one larger.  What can we say about the air flow in the two places?

One thing we know is that if we have an air flow rate through one part of a duct and no air leaks out or is diverted through another duct, the rate at other parts of the duct must be the same.  In other words, if we have 100 cubic feet per minute (cfm) of air flow in the larger piece of duct below, then the air must still flowing at 100 cfm when it gets into the smaller duct.  That stems from the Law of Conservation of Mass and the good assumption that air flow in ducts happens at constant density. If the air flow rate is constant, it’s straightforward to show that the quantity A x v is constant, too.  That’s what we call the continuity equation.  The simple way of stating this principle is:

Static pressure drops are the key quantity to worry about with moving air through ducts for a simple reason.  The continuity equation tells us that the air flow rate stays constant from one part of a duct to another.  But that doesn’t mean the air flow is a constant.

What I mean here is that the air flow rate depends on the resistance to air flow in the duct system, and static pressure is a measure of that resistance.  When we reduce the size of a duct or put a fitting in that turns or divides the air or even just move the air through a straight section of duct, we add resistance.

Adding that smaller diameter section to the duct above, for example, increases the resistance and decreases the air flow from what it would have been had we kept the duct the same, larger size.  So if 100 cfm of air flows through the configuration above, more than 100 cfm would be flowing if the duct hadn’t gotten smaller.

The static pressure drop across any one part of a duct system (fitting or straight section) is proportional to the square of the air flow rate.

I apologize for making you think through a little bit of math here, but hey, we’re not using spherical Bessel functions to solve Schrödinger’s equation in three dimensions.  Stick with me a bit longer and this will make you a better person.

Let’s do this with numbers, which always seems to help.  Say you have air moving at 900 feet per minute (fpm) through that elbow.  The static pressure drop of the air moving through it is proportional to 900 fpm squared.  The result of multiplying 900 by itself doesn’t really matter (it’s 810,000) because there’s also a constant of proportionality involved and we’re not going down that path.

We can write this relationship out as:

Here, Δp is the change in pressure (or static pressure drop) and 900^2 means squared, or 900 x 900.  What really matters here is what happens when we change the velocity.  Instead of using 900 fpm, let’s say the air moves through that fitting at half that velocity, 450 fpm.  How does that change the static pressure drop?  Here’s the answer:

Now we can extract one of the most important lessons of this article:

When you cut the velocity in half, the static pressure drop is cut to a quarter of what it was.

In other words, bigger ducts and lower velocities are better for static pressure than you might have guessed.  And guess what?  All those equivalent lengths for fittings you can find in ACCA Manual D are based on a velocity of 900 fpm.  If you move the air at half that velocity, the actual equivalent length is a quarter of what’s stated in the tables.

How would you like to use a fitting with 10′ of equivalent length instead of 40′?  Just move the air through it at 450 fpm instead of 900 fpm and that’s what you get!  (Unfortunately, HVAC design software may not make that adjustment for you, using the equivalent length for 900 fpm no matter what the actual velocity is.  I know RightSuite Universal doesn’t do it.)

If you’re worried about low velocity in ducts you design or install, take some advice from Alfred E. Neuman. If it’s throw from the register and mixing in the room that worry you, here are two reasons to relax your mind.  First, the velocity of air entering the room is generated by the boot and the register.  It’s just like putting your thumb over the end of a garden hose to shoot the water farther in the yard.  Second, throw from the register isn’t nearly as important in homes with airtight, well-insulted building enclosures with modern windows that meet today’s building codes.  Admittedly, that’s still a small percentage of all the homes out there, but the better the enclosure, the less important throw becomes.

And I’ll give ACCA Manual D the next-to-last word on this topic.  Appendix 15 of the Third Edition, Version 2.50 is titled Air Velocity for Ducts and Grilles.  Those three and a half pages cover the continuity equation, the benefits of low velocity, balancing dampers, and more.  The appendix ends with these words of advice:

There are scores of things to worry about when designing and installing a comfort system.  Low velocity through a duct airway is not one of them.

But sometimes you should worry

So I’ve made the argument that low velocity isn’t something to worry about, but that’s not entirely true.  Yes, in terms of getting good air flow in the duct, you really can’t go too low.  But there’s another important factor besides static pressure that should govern the velocity at which you move air through ducts.  And that’s for the next article.