In 2002, Katrin Klingenberg introduced the passivhaus program to North America when she built the Smith House in Urbana, Illinois. She had come to the US from Germany, where she studied architecture and got involved with passivhaus. But is this really where it all began?

Of course it’s not. The Passivhaus program, promulgated by the Passivhaus Institut in Germany, formalized the requirements but was building on earlier work, much of it from North America. Even the term “passive house” has American origins.

Here are three of the early superinsulated houses in North America: 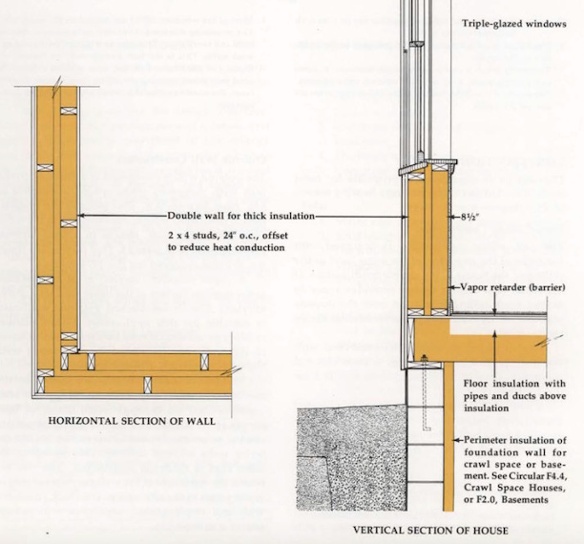 But were they “passive houses”?

William Shurcliff was a Harvard physicist who worked on the Manhattan Project in World War II, helped stop supersonic passenger planes in the 1960s, and took a big interest in passive solar and superinsulated building in the 1970s and ’80s.

Martin Holladay resurfaced this piece of superinsulation/passive house history in his 2009 article, Forgotten Pioneers of Energy Efficiency on Green Building Advisor and republished nearly the entire piece. Go to his article to read that and more on this topic.

The evolution of passive house

Shurcliff’s preferred term, micro-load passive, didn’t catch on, but the passive part did. Those “forgotten pioneers” also pushed another piece of the passive house concept. They understood that airtightness and energy efficiency were important. That meant quantifying the goals, setting limits for annual and peak loads.

That’s what Klingenberg learned in Germany and brought with her to the US. Those numbers worked great in Germany but not so well in all parts of the US. There were problems with the insulation required in really cold climates like Minnesota and with cooling and dehumidification in places like Kentucky and Louisiana.

So the Passive House Institute US (PHIUS), of which I’m a board member, developed new climate-specific passive house standards. Instead of one set of numbers for every place in the world, we have numbers that came out of a lot of work by Building Science Corporation and others on what numbers are supported by the science for different climates in North America. PHIUS also has a rigorous quality assurance program called PHIUS+ Rater, using HERS raters to verify homes going for certification.

The split between PHIUS and PHI

Unfortunately, relations between PHIUS and PHI came to an end a few years ago. I wasn’t involved at the time and don’t know all the details, but now there are two separate groups promoting passive house in North America. The North American Passive House Network (NAPHN) was created after the split between PHIUS and PHI. They promote the German standard. Passive House Institute US now has gone its own way, with a variation of the German standard.

Both groups have their own conferences. I attended the NAPHN conference in New York City a couple of weeks ago. It was well attended (about 500 or so) and had a good trade show. I got to see some old friends and meet some IRL for the first time. (Hello, Terry!) There were also quite a few people there whom I know from PHIUS conferences.

In September, PHIUS will host its 10th anniversary North American Passive House Conference. It’s in Philadelphia, and I’ll be giving a presentation there on a topic that’s gotten me in trouble once already this year. The title is The Global Warming Impact of Insulation Revisited. Joe Lstiburek will be there again, of course, as will Marc Rosenbaum and a bunch of other smart people. (And if you register by 18 July, you can be there, too, and get the early bird rate.)

There you have it. Forty years of evolution of the passive house concept in North America, including a trip across the pond and back. Where it goes from here remains to be seen. There’s some confusion in the marketplace because of having two groups and two different certification paths. (I’ll write more about that in a future article.) Naturally, since I’m on the PHIUS board, I have a bias. I think anyone going for passive certification on a project should go through PHIUS’s climate specific standards and PHIUS+ quality assurance.

A lot of others do, too, because PHIUS has more than a million square feet of buildings certified and pre-certified. When you add the projects that have been submitted but aren’t yet pre-certified, that number jumps to about 2.5 million square feet. The big driver isn’t single family detached homes, though. It’s big multifamily projects.

Come to the 10th anniversary North American Passive House Conference in Philly to learn more about passive house. Will I see you there?

The History of Superinsulated Houses in North America, by Martin Holladay (GBA)