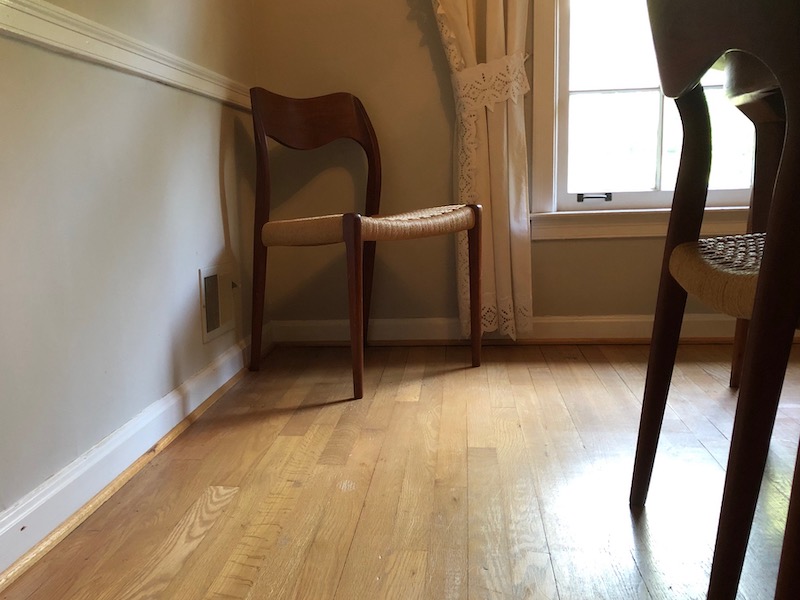 Ah, so many choices.  If you want to design and install a duct system to create problems, the possibilities are endless.  I’ve certainly written about a lot of them (as well as how to do it properly).  Today, though, let’s focus on one particularly bad place to put a duct.  In fact, I think it’s the third worst place to put one.

What spurred this article is that I recently moved from a condo to 1961 ranch house in Atlanta, and my new place has this problem.  The photo above shows it but you can’t tell for sure there.  The photo below should make it clear, though.  Can you tell what the problem is now? The lead photo shows a low sidewall supply register.  The second one shows the same thing but there’s another clue here that makes the problem clear.  Notice the window above the bedroom supply register.  Yes, this supply vent is an exterior wall.

As it turns out, putting supply vents in exterior walls is bad for several reasons.  Here’s my list:

The photo below, which I took at a gut-rehab in progress in Atlanta a couple of years ago, shows what it looks like inside the wall. I’ve seen one or two new homes with this problem in the past decade or so, but this is a practice that has mostly disappeared.  That’s the good news.  The bad news is that if you have an older home with your supply vents in the exterior walls, you ought to plan some way of addressing the problem.

The best thing to do is open the wall and remove the duct and boot, do your air-sealing, and then insulate.  That means finding another place for the supply vents, of course.  In my case, I’ve got an air conditioner and furnace in the basement serving the whole house, and I’m going to rip it out.

The new systems will serve the first floor with two ducted units in our encapsulated attic so I’ll put all the supply and return vents in the ceiling.  Once I do that, then I can completely gut the basement, including the ductwork.  Then later, when I work on the first floor walls, I can remove the vestiges of the old duct system from the walls and be done with this problem forever.

Another way to go is leave the sidewall vents in place and try as best you can to get them insulated and air-sealed.  The photo below shows the basement duct going up into the wall and feeding that register in the second photo above.  A previous improvement project included spraying foam on the band joist and trying to seal it up from below, but this doesn’t solve the problems in the wall above.

Even if I opened the wall and sealed and insulated the boot as best I can, that thing is still displacing wall insulation.  The only way to fix it fully would be to add exterior insulation to the wall.  In my case, that’s not going to happen because I’m not removing the brick veneer. The only way to save those sidewall supply vents and eliminate all the potential problems is to seal and insulate the duct as well as possible and then add exterior insulation to the walls and band joists.  Otherwise, you need to find another way to get heating and cooling to your rooms.

The first and second worst places for ducts

Now, since the problem I’ve just described is, according to me, the third worst place for ducts, you may be wondering what two places are worse.  Right?  The first one is easy.  Can you guess what it is?  (If not, just click that link in the previous sentence or the first article in the list below.)  The second place is anywhere else in an unconditioned attic.

I’m curious what you think might be the fourth worst place.

Keep Out! – One Place NEVER to Put HVAC System Ducts

The Lesson of the Raining, Dripping, Crying Duct Boots