As much as I've written about filters and filtration in this blog, I have to confess there's one aspect of filter efficiency I've resisted learning about.  Every article I've written that mentions filter efficiency talks about only one rating scale:  Minimum Efficiency Reporting Value (MERV).  A couple of other scales are in common use, too, but I just didn't want to know anything about them because I buy and recommend MERV rated filters.  But I took the plunge recently, and here's what you ought to know about the three main filter rating systems.

The standard rating system for filters is called Minimum Efficiency Reporting Value, or MERV.  When I say it's the "standard" rating system, I mean it.  This rating system is defined in an ASHRAE standard (52.2), which specifies the performance required to meet each MERV level and the testing required.  Higher-MERV filters remove more particles from your air.  They also remove smaller particles.  A standard fiberglass one-inch filter is typically a MERV 2.  The high end of the scale is MERV-16.  (It used to be 20, but ASHRAE dropped it to 16 years ago.)

Before we go further, we need to define the three general size ranges of particulate matter (PM). 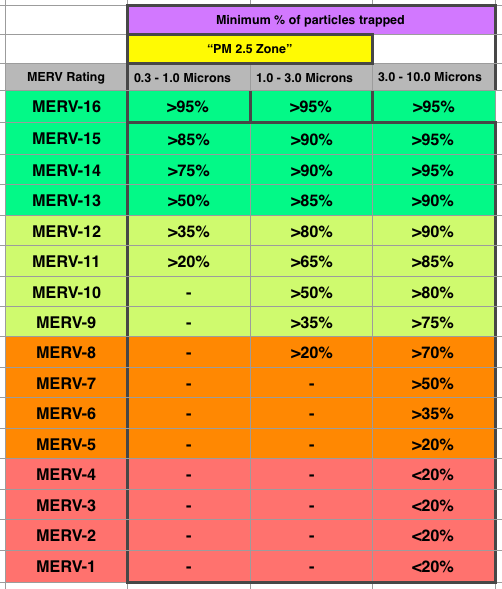 As you can see, you've got to step up your filter game to at least MERV-10 to get even half of the PM2.5.  But you really should think of MERV-13 as the minimum because it removes more than 85% of those particular little bitty invisible pieces of stuff.  For the COVID-19 pandemic of 2020, ASHRAE has started recommending at least MERV-14.

The Home Depot sells a lot of filters.  Rather than use MERV ratings, though, they decided to create their own rating system.  The details of their testing are a bit murky, as their website explains it in broad strokes only.  They look at how well a filter catches both large and small particles and rank the filters on a 1 to 10 scale.  From that, they reduce the scale to four numbers (4, 7, 9, or 10), based on a weighted average calculated according to these percentages:

Here are the four FPR ratings you’ll find on filters at Home Depot:

They must be using a different definition for the word “best” than the one I’m familiar with because their premium is better than best.  If you’re wondering how FPR compares to MERV, the Home Depot website has a section on that.  They start by saying, “FPR 10 is similar in strength to MERV 20, since they are both the highest rating value.”  They’re a bit out of date, however, because the MERV rating goes up to a maximum of 16 now, not 20.  Some filters on their website  have both an FPR and a MERV rating, and at least one with an FPR of 10 is shown as equivalent to either MERV-8 or MERV-13.  (See screenshot below.)  Clearly, this isn’t clear.  Is an FPR-10 the same as MERV-16 or MERV-13 or MERV-8?

They don’t provide easily available information on the sizes of what they call large and small particles, so it’s hard to know what you’re getting with a particular FPR rating.  When you combine that with the difficulty of comparing FPR to MERV, it seems the best you can do with this scale is to use it as a rough guide.  And if you want to filter out as much of the PM2.5 as you can, stick with the FPR-10 or find one with that also has a MERV rating and go with MERV-16. 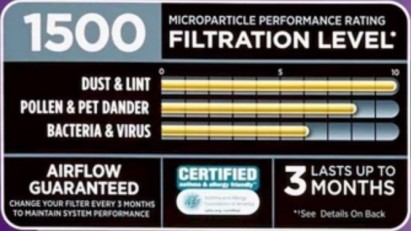 Chances are good, though, that if a filter captures a lot of the small particles, it will capture even more of the larger particles.  The scale just won’t tell you anything about how well it does with particles larger than 1.0 micron.  And we should note that 2.5 microns, the upper limit of PM2.5, is in the group of larger particles not covered by MPR.  Apparently they do measure the larger particles, however, because they have a page comparing MPR to MERV, and there you can download a table of capture efficiency data showing the three ranges of particle sizes used in the MERV scale.

The MPR system, like the other two, uses a numerical scale on which higher numbers indicate better filtration.  The MPR scale, however, uses much larger numbers.  Their basic filter is rated at 100 and their most efficient filter is rated at 2800.  The MPR-2800 would qualify as a MERV-14, so even though 3M emphasizes the smallest size range of particles, their best filter doesn't qualify for the highest MERV rating.

My recommendation is to buy filters with a MERV rating whenever possible.  All three ratings have their problems but even Home Depot and 3M admit on their websites that MERV is the industry standard for rating filters.  Also, if you want the filter to improve your indoor air quality and not just protect the heating and air conditioning system, go with MERV-13, FPR-10, MPR-1900, or higher.  But make sure you can do that without reducing air flow and possibly damaging your system.

In related filter news, my '03 Duramax has a fuel filter which works down to single digit micron levels, but solved the "loading up" problems of early filters by using dual medial technology. The first layer of media captures larger chunks of fuel detritus, while the secondary layer stands ready to snatch those smaller particles.

I trust HVAC filter manufacturers use similar techniques to prevent rapid clogging of their products.

Oh, and another excellent article, Allison!

Great article. Did you come across any language touching on proposed performance at a given CFM value? I recall seeing this on certain air-filter manufacturer's products and the max. CFM value is often very low. From this I take it the filter's performance curve will drop significantly based on increased airflow.

Great article! As I understand it, ASHRAE dropped testing of anything over MERV 16 because that gets into the range of HEPA filters, and those are tested against an ASTM/ISO standard. Nobody would bother specifying or testing to the ASHRAE standard when the ISO standard has to be met.

I am surprised that you didn't include the ASHRAE Standard 62.1 requirement for a minimum MERV rating to protect cooling coils - if memory serves it is MERV 6 (so the manufacturers washable screens or the cheap fiber filters don't make the grade).

I thank you for your very last comment. The effectiveness along with the efficiency of any filter is subject to air flow. The more effective any filter is at capturing airborne particulate, the more effective it is at causing issues with air flow. Two things that I teach contractors when it comes to air filters are that if you are going to increase the effectiveness of the filter, you must increase the physical size to prevent adversely affecting the blower, and that HVAC filters purpose is to protect the HVAC system. If you want to utilize an HVAC system for IAQ for health reasons, a self sufficient HEPA filter system built into the return ducting should be used.

"make sure you can do that without reducing air flow and possibly damaging your system."
That's the concern with filter choice for an existing furnace - the filter size cannot (easily) be changed. Use of a 'high performance' filter might require frequent filter replacement to prevent damage.

Thanks Allison. Nice summary. Now that California title 24 requires MERV 13, I am sure 3M will start to publish the MERV rating. And just when we are getting used to MERV, along comes ISO 16890. Thanks Europe!

Great article. I have a ductless minisplits in my home and therefore I use standalone air filters on each floor. These units use yet another metric called "CADR" or Clean Air Delivery Rate which is independently tested by AHAM. These units provide a CADR value for how quickly the unit cleans in 3 categories: tobacco smoke, dust, and pollen in a given room size. For example my Blueair 211 units claims it has a CADR of 350 for a 540 sq ft room in all 3 categories. One thing I have yet to determine is at what speed? My assumption is on the highest of the 3 speeds the unit offers.

CADR is the airflow rate passing through the filter multiplied by the efficiency of the filter. This combined quantity is what determines the rate of contaminant removal by the filter. Thus, if you double the airflow rate at half the filter efficiency, you would still have the same CADR. I am pretty sure that most portable air cleaner manufacturers are giving you the CADR at the highest speed which is most likely the highest CADR.

Higher speed of air does not always equate to more effectiveness of filtration. In fact, higher air velocity can allow more particulate to pass through filters. The best filtration occurs when the air passes through the filter media low and slow.