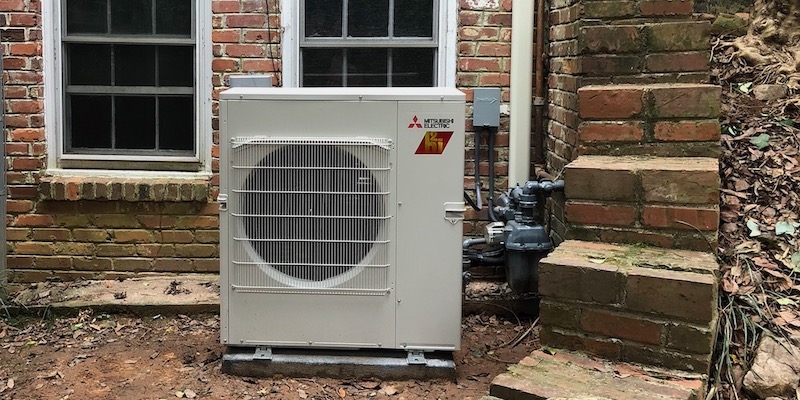 Last year my wife and I bought a 1961 ranch-style house, and I’ve been having a lot of fun fixing it up.  I wrote about the problem with the spray foam in the attic not covering the top plates and how I fixed it when we had the soffits, fascias, and gutters replaced.  I’ve also had a lot more spray foam installed in the attic because the original attic encapsulation was pretty bad.  And I replaced the old natural draft gas water heater with a beautiful new Rheem heat pump water heater.  (I’ll write about both of those topics sometime this summer.)

The other big thing we’ve done so far is to install a Mitsubishi* heat pump system to serve the first floor.  It’s got one outdoor unit and two air handlers in the conditioned attic.  Canton Heating & Air* installed the system and did an exceptional job.  They specialize in Mitsubishi equipment, and their dedication to high quality workmanship shows.  If you’re looking for mini-splits in the Atlanta area, you can’t go wrong with them.  (Yes, they gave us a discount, but I’d say the same things even if they hadn’t.)

You’re probably wondering how I zoned the house, what our heating and cooling loads were, and why I undersized the system, so let’s jump into the details.

I did the load calculation and most of the design work for the system we installed.  (Canton Heating & Air helped flesh out the details of the pair-of-pants fittings, which I’ll discuss in the next article.)  The floor plan is shown below, and the first thing I did was divide the house up into zones.  The bedrooms on the left compose one zone (green).  The common areas on the right are another zone (pink).  And the sunroom needs to be its own zone (blue) because of all the glazing.  About 60% of the exterior wall area in that room is covered with windows (double-pane, from the 1980s or ’90s). We use RightSuite Universal for HVAC design at Energy Vanguard, and that’s where the results you see here came from.  Here are the specifications I used in the Manual J load calculation: Let me explain a little about the inputs.  Except for the sunroom and laundry room, everything else sits over a conditioned basement or conditioned crawl space.  Except they’re not directly conditioned at the moment.  After we put the new system in the encapsulated attic, we had the old furnace and air conditioner removed.  The 110,000 BTU/hr furnace and the 4 ton air conditioner served the entire house as one zone.  It wasn’t great, but the upstairs was mostly OK.  The basement was always too cold, though, as you would expect with this setup.  Now the basement is indirectly conditioned while it awaits being gutted and remodeled, which adds to the heating load of the main floor but probably helps the cooling load.

I modeled the ceiling as R-30, but it’s really more like R-40 now.  Woodman Insulation gave me more than I asked for when they added to the existing spray foam insulation up there.  And I cheated a bit on the infiltration rate.  My last blower door test, which I did after the new spray foam and my extra sealing work at the top plates, came in at 5,200 cfm50 (~9 ACH50) for the whole house.  So, the attic insulation is actually better than modeled and the air leakage is worse than modeled.  I don’t recall why I did it that way, but those two deviations probably come close to canceling each other out.

In the window inputs, DP stands for double pane and SP stands for single pane.  U is the U-factor, the reciprocal of the R-value.  SHGC is the solar heat gain coefficient.  Most of the single pane windows have storm windows, which explains the 0.57 U-factor for some of the SP windows.

So, what size heating and air conditioning equipment did I choose?  First, let me tell you my thinking.  I don’t want equipment that will satisfy the loads in the house as it is.  I’ll be gutting and remodeling the basement fairly soon.  (I’ve got a book to finish first, though.)  After that, I’ll start working on the main floor, with more air-sealing and new windows and major renovations of some areas (the master bath, for sure).  Because of those plans, I want equipment that will be a bit undersized.  Besides, I know that even when I do a Manual J load calculation correctly, it still comes up with a load that’s about 10 to 20 percent higher than the actual load.

The equipment I selected includes one outdoor unit, the Mitsubishi MXZ-3C24NAHZ2 with HyperHeat, and two horizontal ducted indoor units.  Because there’s only one outdoor unit, this is just one heat pump.  The total capacity of the system is based on what that outdoor unit can do because that’s where it dumps the heat it removes from the house in cooling mode and where it pulls the heat from to send into the house in heating mode.  Our nominal total capacity is 2 tons; the 24 in the outdoor unit model number stands for 24,000 BTU/hr, and one ton of capacity is 12,000 BTU/hr. The ducted mini-split air handlers serve all of the main floor except for the sunroom, to which I’ll be adding a separate wall-mounted ductless unit soon.  The bedrooms zone is served by the Mitsubishi SEZ-KD09NA4 (shown above), and the common areas have the Mitsubishi SEZ-KD18NA4.  Focusing just on these two main floor zones, here are the loads and the capacities of the equipment:

Since the total capacity of the system is dictated by the outdoor unit, here’s what the totals look like:

The capacities shown in both tables above are from Mitsubishi’s software called Diamond System Builder.  As you can see, the numbers don’t look too bad for total cooling, with a total capacity deficit of about 2,500 BTU/hr.  But the heating capacity is 11,000 BTU/hr lower than the load.  Can that possibly work?

I intentionally undersized the equipment installed in my house because I don’t want future improvements in the building enclosure to leave us with too much capacity.  The total cooling capacity is only 88% of our cooling load, and the heating capacity is a mere 65% of the design heating load.  Astute readers will have noticed another problem with the cooling capacity, but let’s deal first with the mode I have the most experience with: heating.

Did the house stay warm enough?

We got the heat pump installed with both air handlers operating in November 2019, so we’ve been through one whole winter with it.  Oh, did I mention we didn’t install any supplemental heat?  It’s true.  But we have lots of sweaters and blankets, so we survived.  Just kidding.  We didn’t need any supplemental heat this past winter.

Yeah, the winter wasn’t terribly cold, but we did get tested a bit.  We had about 2,200 heating degree days December through April, which is below the Atlanta average of about 3,000 HDD.  We did have a three-day stretch of cold weather when it got down close to our outdoor design temperature each night.  The night-time lows were 25° F, 24° F, and 25° F, with daytime highs of 37° F, 40° F, and 49° F.  The house stayed warm the whole time.  We woke up to an indoor temperature a bit below the thermostat setting, but it caught up when the day warmed up.  If we’d had colder weather with daytime highs in the low 20s, I think we would have needed supplemental heat.

So, I’m not worried about the heat right now.  Manual J heating loads don’t count interior loads, so our bodies and the appliances that give off heat all help.  Once I get done improving the building enclosure, the loads should drop and be a lot closer to our heating capacity. Even before the improvements, we have some flexibility because of the two air handlers.  If it stays really cold for a few days, we can do most of our heating in the common areas zone during the day and keep the bedrooms cooler than normal.  We usually sleep with the bedrooms cooler anyway.  And we also have the Hyper-Heat model, which is supposed to provide full heating capacity down to 5° F.

The cooling effectiveness, so far

The total cooling capacity is 88% of the cooling load, so we’ll be tested on hot days.  So far, we’ve had temperatures right at 90° F, just a few degrees below our summer design temperature of 93° F.  The air conditioner hasn’t had any trouble cooling the house to the thermostat setpoint yet. But I’ve done another little experiment to push the system further.  Since the cold weather ended, we’ve been opening up the sunroom (shown above), which is connected to the den by a set of French doors.  On the hot days we’ve had so far, the den still cools to our usual setpoint of 74° F.  To cool the den with sunroom doors open, though, the system has to run more than it was designed to run.  That leads to the living room going down to about 71° F because the thermostat is in the den.  With the sunroom doors closed, the temperatures even out pretty well.  We’re about to get a wall-mounted ductless mini-split for the sunroom, and that’ll make this problem disappear.

Now, I alluded to another cooling problem, and it’s related to humidity.  According to Mitsubishi’s software, our total latent capacity is only 718 BTU/hr whereas our latent load is 3,803 BTU/hr.  If that’s correct, our system will do little dehumidification.  I haven’t measured the amount of condensate coming out of the system yet, but I’m pretty sure we have more than 718 BTU/hr of latent capacity.  We’ve had some warm, humid days lately and the humidity in the house hasn’t gotten out of control.  Our dew points this week have gotten up as high as 74° F (Ugh!), and the indoor relative humidity is still mostly less than 60%.  If I believe the separate thermo-hygrometer over the thermostats, it’s always less than the 60%.

In short, undersizing the system hasn’t resulted in uncomfortable conditions in our house (yet).  And it hasn’t motivated me to accelerate my schedule of improvements to the house (yet).  We’ll see how it goes as we get into hotter weather this summer and what happens when we have a real cold spell.  For now, I’m happy with my skinny little undersized heat pump.

Next time, I’ll cover the duct system, including filtration, for my two mini-split air handlers in the conditioned attic.  Meanwhile, I’ve got to go see what the birds in my backyard are up to this morning.  Those bird feeders in the photo are only five of the eight I’ve set up.