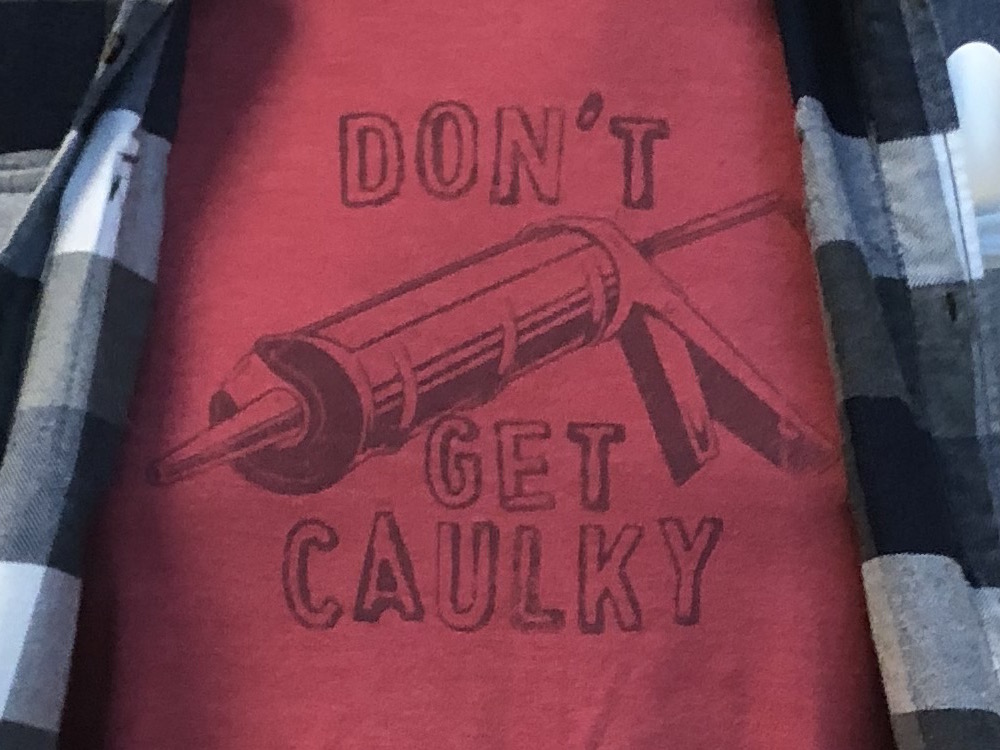 Caulk your windows. Weatherstrip your doors. It’s that time of year again. No, I don’t mean the time of year when you should do those things. I mean it’s the time of year when all the news stories that include this ineffective advice start appearing. There’s a lot of bad advice included in those articles, but let’s just look at why the caulking and weatherstripping advice will provide minimal relief.

The first problem with caulking and weatherstripping

I’ve written about this topic a number of times. Most recently, it was my article about bad energy saving tips on Clark Howard’s website. I covered a number of their bad tips but gave only a cursory answer to the caulking and weatherstripping issue:

Why? Because doing this will reduce your total air leakage by a small amount. The bigger leaks are in your crawl space or basement and in your attic.

That is reason number 1 that caulking and weatherstripping aren’t going to help a whole lot. When you’ve got really big holes in the ceiling or floor, the gaps around the windows and doors pale in comparison. For example, there’s the bathtub hole in the floor, as shown below. The open chase to the attic is another biggie. In the photo below, the mechanical closet had no ceiling. Occasionally contractors or homeowners put really crazy holes in the ceiling. My in-laws had a hole cut in their kitchen ceiling, and the best I could figure was that the remodeling contractor who did their kitchen a few years earlier thought their refrigerator needed to be vented to the attic. Another crazy hole found in someone’s home was the one shown here. It’s open at the top to the attic and connected to a louvered grille at the ceiling below. Stuart Perkin of Airtight Energy Inspections sent me this one and said it was one of three in that Colorado home. Even worse, he said it was installed by the builder, not a DIY homeowner. The other problem with caulking and weatherstripping

I mention the other problem with caulking and weatherstripping just about every time I teach a class that includes understanding air leakage. Somehow, though, I don’t think I’ve ever put it here in the blog. Before I reveal what it is, let’s review the fundamentals of air leakage.

If you live in a windy place, that can be a significant factor. You can’t control that pressure difference so the best way to prevent it from stealing conditioned air from your home is to seal up the leaks. Go for all the big leaks you can find first.

That leaves the stack effect. Warm air rises inside the home because it’s less dense than cold air. (Actually, it’s pushed upward by cold, dense air leaking in at the bottom, but let’s not get into all that controversial stuff right now.) Because of the different air densities, you end up with different pressures in the house. As you see in the diagram below, you get positive pressure (inside higher than outside) at the top and negative pressure at the bottom of the house. Air leaks when you have a pressure difference and a pathway, so you’ll get a lot more air leaking at the bottom and the top of the house than you do in the middle. In fact, you could even have an open window in the middle and get very little air leakage if you’re at what’s called the neutral pressure plane.

The photo below shows the stack effect working its magic on a building under construction in Boston. The plastic is getting sucked in at the bottom because of negative pressure and pushed out at the top by the positive pressure. The stack effect increases with building height and temperature difference between inside and out. Tall buildings on cold days get it the worst, but a two or three story home can experience significant air leakage due to the stack effect, too.

Should you caulk and weatherstrip?

The common advice for winterizing your home isn’t incorrect. Well, not completely anyway. It’s just that it’s likely to be ineffective because of the two reasons I described here:

Air leakage is one of the biggest problems with homes, so it’s absolutely worth going after it. Just be smart about it and go for the big leaks. Those standard tips for winterizing a home may give you a warm and fuzzy feeling but won’t give you a warm and cozy house.

If you want to make a real difference in your home, read the second part of this little series:

10 Uncommon Tips for Winterizing Your Home