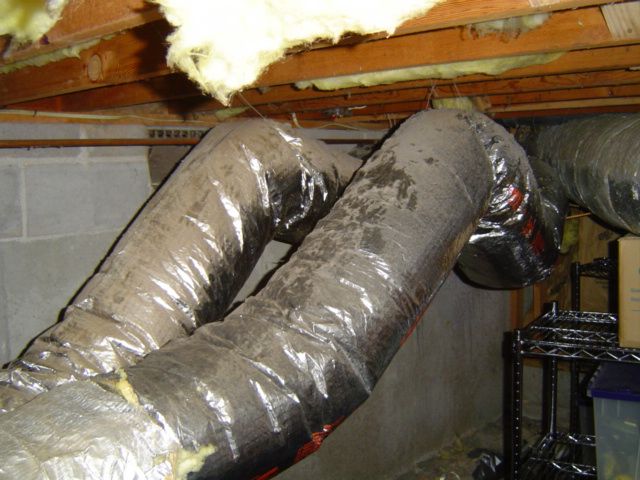 Sagging flex duct is bad for air flow. We all know it. We all talk about it. It turns out there’s research data to prove it, too. Texas A&M did a study a few years ago to look at the pressure drop that occurs for different levels of compression. If you’re not familiar with this study, the results may astound you.

Papers about scientific research aren’t always the easiest reading, but stick with me and I’ll see if I can make this one as painless as an Irish Car Bomb. (I’m talking about the drink, not an actual bomb, silly!) The paper I’m writing about here is titled, Static Pressure Losses in 6, 8, and 10-inch Non-Metallic Flexible Ducts, (pdf) by Kevin Weaver and Dr. Charles Culp. If you’d like to read it, click that link in the last sentence and dive in. If not, let me give you what I see as the big takeaways in their work.

Briefly, the researchers set up a test apparatus that let them control the air flow through a section of duct, both rigid and flex. Then they changed some of the properties of the flex duct to see what happened to the air flow and static pressure. The diagram below shows the test apparatus.

The variables they looked at were:

Compression of flex duct – How long was the duct compared to its maximum stretch? They looked at 5 variations here: maximum stretch and compressions of 4%, 15%, 30%, and 45%. Note that compression in this use refers to the degree that the duct wasn’t stretched out to its full length. It has nothing to do with being squeezed around the middle.

Sag – With joist-supported duct, they looked at natural sag and long-term sag. The difference between the two is that long-term sag represents and extreme case.

The table above shows the amount of sag for the different compression percentages and duct sizes. Note the highlighted cells. They point to the sag for the 6″ duct, which is the size I’m going to focus on in this article. At low compression, the natural and long-term sag are the same. When you get up to 30% sag, though, they begin to diverge. At 45% compression, the 6″ duct has 7″ of natural sag and 11.5″ of long-term sag.

The researchers looked at the static pressure in inches of water column (i.w.c.) versus air flow in cubic feet per minute (cfm). They compared what happens in various states of compression for flex duct to what happens in rigid metal duct. Each graph below is for a different compression, beginning with a perfect installation that has no compression.

Also, each graph suffers from the tendency of academics to make things too complicated. They show as many as 12 curves on one graph. Ughh! I didn’t have time to replot the data and make them easier to understand, so I’m going to direct your attention to the data for the 6″ ducts only. They’re the ones with the circles for data points. Just ignore all the triangles and squares.

0% Compression. What you see in the first graph is that there’s essentially no difference between perfectly installed flex duct and rigid metal duct. The curves for the two types overlap almost perfectly when you pull the inner liner of flex duct tight.

4% Compression. The second graph shows what happens when you leave just a little bit of slack in the inner liner of the flex duct. It’s just 4%, but notice the big difference between the flex and the rigid metal duct here. The joist- and board-supported flex overlap each other but are both significantly higher than the rigid metal duct.

Looking at the 6″ duct data (the circles), find where each curve crosses the 0.1 i.w.c. static pressure line. If you read the air flow for each, you’ll see that the 4% compressed flex is moving about 70 cfm, whereas the rigid metal duct is moving about 110 cfm. Wow! That’s a huge difference and we’re only at 4% compression!

What this analysis shows is that the lower the curve on this graph, the better. The higher it is, the worse it is.

In addition, we see a new pattern developing. Now we see a difference between joist-supported and board-supported flex. You know which one is worse without even looking, right? (Recall from the last graph that the higher the curve, the worse it is.)

Another way to look at this is to notice that to keep the 70 cfm we had at 0.1 i.w.c. with 4% compression, we now have to have 0.25-0.5 i.w.c., depending on whether the flex is board- or joist-supported. Higher pressure means more fan power, which means more energy use.

30% Compression. Again, we see a big drop in performance. The curves move up. The maximum on the pressure scale this time is 7 i.w.c. To maintain 70 cfm in flex with this level of compression, we need 0.5-1.0 i.w.c. That is, more fan power and more energy use.

Also, they’ve plotted the other type of joist-supported data, those for long-term sag (i.e., worst case). Natural and long-term sag aren’t so different at 30% compression, though. Hmmm. I wonder what the 45% data will show?

45% Compression. Surprise! Surprise! Well, OK. There’s no surprise here. Everything again is much worse. The scale now goes up to 9 i.w.c. The flex with long-term sag is significantly worse than the flex with natural sag, which is worse than board-supported flex. Also, apparently these data were the subject of a lot of debate on the Manual D committee. According to David Butler:

“When the latest (3rd) edition of Manual D was in development, there was a lot of discussion about friction rates of poorly installed flex. Texas A&M, having studied this, provided data from its research for inclusion in the manual, the idea being to give designers an idea of real-world friction rates, and hopefully persuade diligent contractors to follow recommended installation practice.”

If you look at these data from the Texas A&M study, you can see that the doubling and quadrupling are actually a bit optimistic. For joist-supported flex at 30% compression, for example, it’s more like a factor of 10, not 4.

Of course, you could use the data from this study to aid your design, and they do show all this now in Appendix 17 of Manual D. To design for proper air flow with improperly installed ducts would be downright stupid, though. If you can’t install it properly, use rigid metal duct.

Is flex duct worth the effort?

In my opinion, flex duct is just fine as long as you don’t abuse it. Pull it tight. Use it mainly for straight runs. Occasionally, you may find a place where you can make a long, gentle turn, and that can be OK. The analysis done by the Texas A&M researchers, however, applied only to straight runs of flex duct. It doesn’t apply to the extra turbulence you get when you make a mess of turning the air. If you do really stupid stuff, like put a sharp kink in it as shown below, that only adds to the problems of the liner not being pulled tight.

The problem is that most flex duct is installed horribly. The two photos I’ve included in this article are a tiny part of my collection. (Be sure to check out my new favorite duct disaster!) But installers get away with it by oversizing the heating and air conditioning systems so the bigger blower might have a chance of making the house reasonably comfortable. There you have it. Flex duct can work, or it can go horribly wrong. Now, you bring the Guinness, I’ll bring the Jameson and the Bailey’s, and we can start discussing the deeper issues like double-stud walls versus exterior insulated walls, the proper metric for measuring the airtightness of Passive Houses, and whether or not Joe Lstiburek can stand on his head, drink a beer, and sing O Canada all at the same time. And after a couple or five Irish Car Bombs, we may all be standing on our heads.