It took me a while, but I’ve finally figured out how best to use my PhD in physics.  (You can read and even download my doctoral dissertation, completed at the University of Florida, 1998.)  I’ve always loved science, and I started off on the traditional academic path after graduate school, but that wasn’t really enough for me.  I loved teaching, but I needed to find a way to use my interest in energy and the environment as well as my love of buildings, especially houses.

A lot of little steps along the way brought me to where I am now:

What really started the ball rolling for my new career and the founding of Energy Vanguard, though, was when I built a house myself.  In 2001, I bought a piece of land and spent the next two years building a green home that’s beautiful, efficient, and comfortable.  Having never built anything bigger than a bookcase prior to taking on this project, I had a steep learning curve in front of me—and I loved it!

After finishing the house in 2003, I became a home energy rater and left academia for my new career in the field of high performance homes.  My first business was called ab3 energy, and I offered home energy ratings and building science consulting.  When that turned out not to be enough to keep the 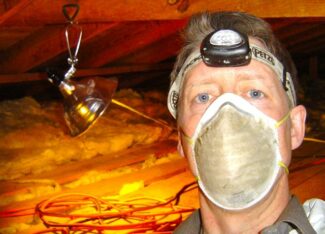 business afloat, I started offering Manual J heating and cooling load calculations, and I even got into the contracting business.  I did air-sealing, duct-sealing, insulation, and crawl space encapsulation to provide homeowners with a comprehensive package to improve their home’s performance.

That business was going well when life threw some curve balls at me, so I ended up going to work for another home performance contractor (The Hoots Group) in Atlanta.  I learned many new business and contracting skills, and then got the opportunity to work for one of the premier energy efficiency and green building organizations in the country—the Southface Energy Institute.  At Southface, I started off as the regional manager for the EarthCraft House program and then also became the manager of Southface Energy Rated Homes, their energy rating providership.  Again, I learned a lot there that would have been much harder to learn on my own.

In 2008, I decided that I wanted my own company again, so I left Southface and started Energy Vanguard.  In some ways, this company is a continuation of ab3 energy, but it’s also a lot more than that.  Energy Vanguard focuses on teaching, HVAC design services, and some consulting.  I see this company as being on the forefront of change—the vanguard—in the way we see and use energy in our homes.

One of the main things I do here is write, especially lately.  I’ve been writing the Energy Vanguard Blog since March 2010 and have published nearly a thousand articles as of November 2021.  I also publish a week newsletter called News From the Front, which includes links to new blog articles, a weekly column not posted elsewhere, and other good information.  (Here’s a recent edition.) You can subscribe to the newsletter using the green box in the sidebar on this page.

And in March 2020, I began writing a book that will be available in mid-2022.  It’s titled A House Needs to Breathe…Or Does It?  You can read about it by clicking on the page and subscribe to updates to be among the first to find out when it’s available (as well as getting the subscriber discount).

It’s been a bit of a winding path, but I’m doing what I love now and feel that I’ve finally figured out how to combine my interests, skills, experience, and education in a way that lets me serve clients to the best of my ability.

Please let me know how Energy Vanguard can help you, whether it’s with training, HVAC design, or some other building science need you have.

Feel free to connect with me on LinkedIn.