The 3 Levels of the Building Enclosure Hierarchy

When you approach the subject of building science, especially as it regards heat, air, and moisture flows through the building enclosure, it's easy to get confused. There's a lot to learn: blower door testing, insulation grading, R-value, permeance, radiant barriers, combustion safety, solar heat gain coefficients... That's why we break things down into simpler pieces. In science, that process has led to all kinds of discoveries (atoms, nuclei, quarks, organs, cells, bacteria...).

The building enclosure is the boundary between conditioned space and various types of unconditioned space (outdoors, garage, attic...). It's a key concept in building science and in understanding the house as a system. This is Building Science 101. But there's a hierarchy here. We should be thinking of this in three levels:

The enclosure includes floors, walls, and ceilings. Each of those components is typically made up of assemblies. And assemblies are made of materials.

"OK, that's all well and good," you're thinking about now. "But what does this mean to me?"

Here's why it's important to understand the distinction between these three levels of the building enclosure. Products have ratings. Sometimes it's the material that's rated. Sometimes it's an assembly. And sometimes shady salespeople try to confuse prospects by blurring the lines between what was rated.

Let's take the case of foil-faced bubble wrap. It's a product made up of a couple of materials - plastic and aluminum foil. But when used in the building enclosure, it's only one part of an assembly. 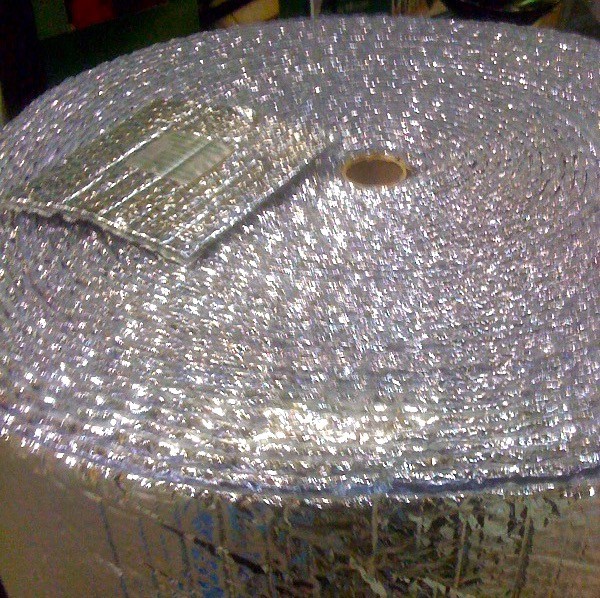 No! That's not for the bubble wrap itself. That's for bubble wrap in a particular assembly. Martin Holladay covered this topic really well in his article, Stay Away from Foil-Faced Bubble Wrap. See especially the section titled, "Blurring the line between product R-values and assembly R-values."

Of course, R-value isn't the only place you need to understand the distinction between material, assembly, and enclosure. Here are a few others.

When evaluating the performance of a building, you'll be better prepared to make the right call if you understand these three levels.

Your HVAC System Is the Faucet; The Building Envelope Is the Cup

And like total wall R-value VS the rating for the insulating material, especially when taking into account thermal bridging of framing and R-values of fenestration.
WRT the bubble wrap - I am working on a theory that it does work when installed against a roof deck as instructed; just not the way the manufacturer thinks. It does not have the assembly R-value advertised, but does provide a better way of cooling off the roof deck and minimizing re-radiation of roof solar gain into the attic space. Not necessarily the most cost-efficient way of accomplishing this, but it does work.

Good stuff as usual Allison. Have you played around yet with the new Building America Building Science Advisor Wallexpert tool? I'd be curious to get your take.

Dan, no, I haven't played with it yet. I saw the Oak Ridge guys (Andre Desjarlais and Simon Pallin) do a little presentation on it at the ASHRAE meeting this summer, though, and it looks like it's going to be a great tool. It's also a good use for WUFI without actually having to do a WUFI simulation..as long as you understand the limitations of it.

Science and the science of building need to be approached with Occam's razor. that all things being equal the system with the least variables will be the correct approach. we need to start moving in this direction.

Question:
We have a 100% electric forced air HVAC in a 2600 four level split 1975 home. I have done as much as reasonably possible to minimize bills. Our per square foot total cost is about 8.00 per year (which according to a recent article was a 'good' rating for cost.
With that number in mind we have upgraded windows, added attic insulation to 12 (approx R 36), added an attic blanket (which I know may have been a mistake but this was done 10 years ago before I met you, caulked and re-caulked a number of times the exterior window and door areas. We pay an average bill of 260.00 per month with a KWH cost of 10.5 plus we do the time of day metering as well which means we pay extra from 8 AM to 8 PM and we get a large discount from 8 PM to 8 AM plus all weekend long as well so we do the 'heavy' stuff like laundry and cooking during the cheap times. We do use an auto thermostat with 78 for AC and 68 for heat (we are in central Iowa).

So now the exterior which is why I am writing.
We have original Masonite type siding....the kind that rots if one does not keep it painted. Whereas ours in still very good (99 %) like new I want to change it....or should I say I want to convert to vinyl without taking off the original siding.
My idea is this:
horizontal strip about 2 feet apart top to bottom with 1 by 2 inch wood strips and then go over the top of those with vertical wood strips of 1 by 2 and screw those into the current 2 by 4 studs under the current siding. This would create a 2 plus inch overlay into which I would have closed cell foam sprayed against the original house siding. I would need to build out the window framing which I have done on other rentals we own so I can do that work to save money.

The original house build was 1975 and it was built as an ALL ELECTRIC home in an era of the natural gas moratorium during those 'energy crises' years of 1972 to 1975 or so. So for time frame and for the age it is fairly efficient.

My goal above is to make it super efficient.

Any suggestions? Any problems I have not though of in doing the above. I am aware of air circulation and moving air through the house but I am not concerned about 'making the house' 'too tight' or should I be?

If you leave that masonite on and cover it, the termites will love you for it. Masonite doesn't breathe well on either side, but its interior side readily absorbs moisture. It doesn't care if that moisture comes from the interior of the home or gaps in the seams. And once there, it has a nasty tendency to stay. One source that does dry it well - sunlight - is removed in your scenario.

Something to reflect upon, R-value just measures resistance to conduction, but I remember heat flows from hot to cold three ways; conduction, convection and radiation, and like most humans takes the path of least resistance. The radiant barrier needs to face a still air space, so it does not lose it's radiant value, by conduction or convection.

Dennis, you wrote, "R-value just measures resistance to conduction." That's what a lot of people believe, but it's not true. R-value measures the heat flow through a material or assembly due to all three heat transfer mechanisms. They put a temperature difference across it and measure the heat flow. There's no way to separate out conduction from convection and radiation in that process.

But yes, radiant barriers do need an air space to work, and they work only as part of an assembly, not by themselves.

My dad always likes hearing people talk about the R values of their homes. He asks, "But what is your home's E value?" The R value is a materials measurement. The E value is much more important. They truly are not always consistent between buildings even if they have similar materials.