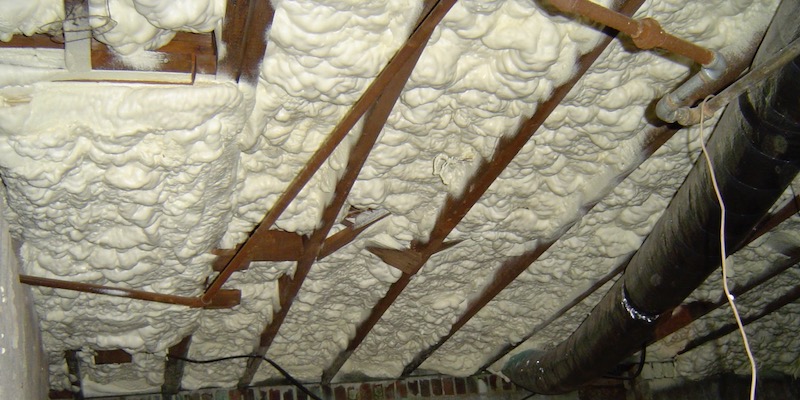 [Edited to add this paragraph in 2021]  I live in a home with spray foam insulation. My attic is encapsulated with open-cell spray foam, and my basement and crawl space have closed-cell spray foam to air seal and insulate the band joist. Because I understand the principles of building science, I made sure that none of the problems described below apply to my home.  I also care about indoor air quality and monitor for volatile organic compounds (VOCs), which can be emitted by spray foam.  I’ve got two Awair Element indoor air quality monitors, one in the den and one in the master bedroom.

What’s not guaranteed, however, is that all spray foam homes will be efficient and comfortable. I’ve seen a number of houses with problems even though they’re insulated with spray foam. In order of prevalence, here are the problems I’ve seen, with explanations following the list:

This is more common with closed cell foam, but it happens with open cell foam, too. Since closed cell foam has a higher R-value per inch, installers generally spray 2″ in walls and 3″ in rooflines to meet the energy code requirements of R-13 and R-19, respectively. (I’m not going to dive into the energy code here, but these numbers apply to many climate zones, the latter being allowed under the UA tradeoffs rule. See the Energy Nerd’s blog on this topic if you want to argue.)

Open cell foam usually fills the framing cavity completely, so it’s easy to tell if the installer has sprayed enough. Closed cell foam doesn’t fill the cavity, so you’ve got to spot check in a bunch of places to make sure you don’t get shorted.

The video below is from a house near Charleston, South Carolina that I visited recently, and you’ll see that the homeowner in this case didn’t get his money’s worth. I knew immediately when I walked into the attic that something was wrong because it was hot up there. In a properly insulated spray foam attic, the temperature won’t be much higher than the house temperature.

The problem was that the installer was doing his first spray foam job ever, and the thickness of the insulation varied from zero (visible roof deck) to about 9″. Unfortunately, good average thickness doesn’t cut it. The coverage needs to be uniform because a lot of heat will go through the under-insulated areas. (See my article on flat or lumpy insulation performance.)

2. Spray foam installers missed some of the air leakage sites.

Once I got a call to look at a 10,000 square foot house that had spray foam throughout, but the owners had a serious problem in their first summer in the house. When I arrived, they took me to the master suite, where two towels were on the floor – to catch the rain falling off of the supply registers in the ceiling!

The problem was that the installers missed some areas at the soffit in the attic above the master bedroom, and gaps around the tray ceiling allowed the humid air into the room, where it naturally found the cold surface to condense on.

As this example illustrates, it’s important to seal the envelope completely. One of spray foam’s biggest selling points is its air-sealing ability, but it can’t seal places where it’s not sprayed. One of the nice things about using spray foam in new construction is that you can do a Blower Door test before the drywall goes in. Even better, you can test for leaks with a fog machine.

3. Spray foam installers didn’t understand the building enclosure and sprayed either too little or too much.

In complex houses, seeing exactly where the building enclosure is can be a challenge. If the installer misses areas, it may or may not be an air leak, but it will definitely be a thermal bypass because of the lack of insulation. Every part of the building enclosure must be insulated, or the home will have excess heat loss/gain.

Another problem I’ve seen is that the installer sprays extra foam because they haven’t identified the location of the building enclosure, the boundary between conditioned and unconditioned space. In the photo below, that wall with foam all over it has conditioned space on both sides. The homeowner paid extra and got nothing for it. 4. Spray foam contracts and pulls away from framing.

I’ve seen this only once, and it was with closed cell foam, but I’ve heard of it happening with open cell foam, too. I don’t know the details, but I’ve heard it could result from a bad batch of chemicals, improper mixing, or too high a temperature. Whatever the cause, it’s not a good thing. The photo below shows how the spray foam pulled away from the studs. A little bit of uninsulated area like that can add up to a lot of wasted energy when the whole house has that problem, as it did here. Don’t assume that just because a home is insulated with spray foam that it’s automatically a winner. Every product has its pitfalls, and spray foam is no exception. The good news, though, is that spray foam’s problems are generally less frequent and easier to overcome with proper planning and follow through.