Sometimes HVAC companies take the easy way out when they install ducts. They may even have done this in your home. I've seen it in many, many homes, and I know as soon as I see it that the duct leakage in that home will be very high. The photo below shows one way you can find them in your home.

If you have a big grill in the floor like this, you'll most likely see sheet metal at the bottom and wood around the sides. In this case, it's big enough that there's even a joist running right through the middle. What the installer did here was to screw a piece of sheet metal to the bottom of the joists and attach a duct to it to carry the air back to the HVAC system. As we look closer, here's what we see in this house. 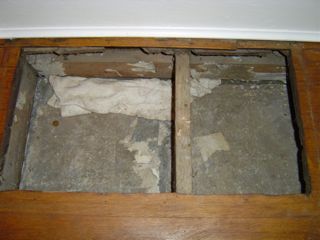 Wait. Is that a towel in there? 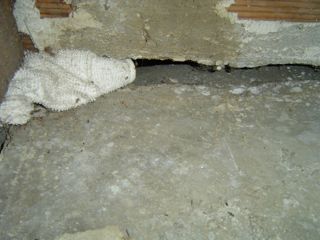 It sure is! Looks like someone tried to fill the huge gap between the sheet metal and the joist with it, but guess what - towels aren't meant to seal ducts. Air moves through them. Not only that, they didn't fill all the gaps. Every time this system runs, in addition to pulling air from the house back to the furnace or air conditioner to be heated or cooled, it's also pulling a lot of air from the nasty, yucky crawl space below the floor. And then sending that bad air right into the home for the lucky family to breathe. (And when I say lucky, I mean the opposite.)

In almost all cases, when you see this done, it's on the return side of the duct system, which means that they're pulling air back to the unit to be heated or cooled. Which means that it's under negative pressure. Which means that, when there are leaks, as evidenced by the huge gap above, it's going to pull air from other places besides the house.

Panned joist return ducts are almost always terribly leaky. Those junctions between wood and metal are difficult to seal, and the thermal expansion and contraction of the wood will often cause sealing materials to fail.

Occasionally, I see panned returns where the HVAC company actually tried to seal it up. The photos below show one that I ran across about two years ago. 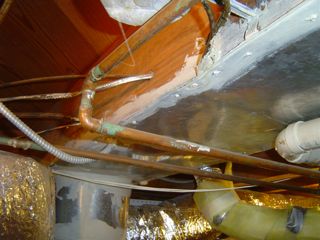 That white stuff you see is duct mastic, and it's one of the best sealants you can use to get your ducts tight. You should use it generously if you decide to seal up your ducts. There's a saying in the weatherization industry that you should slather it on as "thick as a nickel." 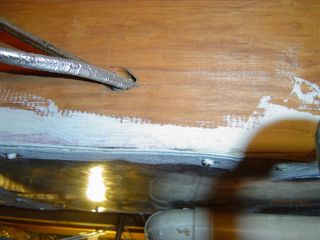 They put a thin schmear of mastic on the joint between wood and metal, but they completely missed all the big holes — and there were many — drilled through the 'duct' for wiring. They also missed the joints where wood met wood.

As a result, this panned joist return duct sucked in a lot of air from this basement when the furnace or air conditioner were running. Did that cause problems? The photo below shows some of the joists in the vented crawl space that the basement was completely connected to. 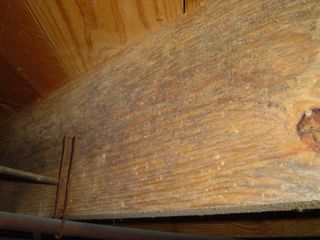 What do you think? Might the homeowner's persistent cough and sore throat have been related?

Building or remodeling a house and need help with the HVAC and duct system design? We do that.

Funny, I am in the middle of writing an article on this very thing. I did an audit on a house the other day and they have several of them. To make matters worse the old metal ducts leak a ton (or maybe two) and there is a small sewage leak in the crawl located right under one of the pans. GROSS! Great article.

Jon: Make sure to put some good photos in your article. I look forward to reading it. It's unfortunate that the building code still allows panned joist returns.

Many times the leaks in an undersized duct system are the only thing keeping border line airflow rates from falling off the cliff.

It's always safer to test than assume a duct system is sized right.

David: Thanks for reminding that I should've mentioned the static pressure issue. I wrote an article about that last year: A Bad Duct System Trumps High Efficiency HVAC Equipment.

I have been thinking about this since yesterday. It is a bit off subject in a way.

What about insulation that lines plenums and units. Does it work? Think about it for awhile. Inside the ducts the pressures and velocities of air are very high. If air can move through the insulation, then where does that leave the insulation?

I came across this because of a run out that was loosing 40% of its temperature split even though it was deeply buried in insulation. The only thing we could target was a plenum with sheet metal in high radiant heat and only insulation lining the inside of it.

Perhaps the insulation is the culprit... fiberglass gets much hotter than the cellulose in the summer here in the DC area

Christopher: That's an interesting question. Clearly, the R-value of insulation decreases when air is moving through it, and fiberglass inside a duct system can have air moving through it, and it's not all that high to begin with (maybe R-8) for such a high ΔT. A 40% loss of temperature just because of an internally insulated plenum seems a bit hard to believe, but maybe it's true. Let me know what you find out.

BG: I assume you're talking about Christopher's internally insulated duct problem. If so, it might well be that the buried ducts are losing more than it seems they should.

I've also heard that ensuring that holes like these are filled will give you a few extra minutes in a fire as the smoke can't move around your home so quickly.

Andy: You're right. Anything that makes it harder for air to move through the house and across the building envelope is a good thing for safety.

although manual D and therfore ACCA

does not reccomend joist panning,

they fail to reference the National Fire code that prohibites this? Does any one know the actual reference

This is a dumb question, but how do you seal your ducts when it goes down to 37 at night with duct sealant - mastic, when all the ones I've found say to leave your HVAC off for up to 72 hours??? Is it because they are water based???

At first I thought the pictures were from my house. We have old half unwrapped and previously vermin occupied ducts. With that damn pan thing. Should we just put new ducts in the attic? I think a dry crawl is out of the question. They never leveled the crawl before building. There's also huge slabs of broken concrete. Don't ask me why I bought this. Also, no one who has come out has done a static test. And half the HVAC techs never get back in touch with us. Is this common? I'm having a hard time finding some one to do the job correctly.