Cajuns, Living Down the Bayou, and Peak Oil

Posted by Allison Bailes on September 6, 2011

I’m not a Cajun myself, but I lived with the Cajuns in south Louisiana for eight years. In 1971, my mom moved us to that area, and we ended up in a place called Chauvin on a narrow strip of dry land between marshes. About ten miles south of us was Cocodrie. That's where the road ended. All directions were given in relation to the “front” bayou; whenever we went anywhere, we were going either “up the bayou” or “down the bayou.” Unless we went across the bayou or to the back bayou or to "town" (Houma), which was way, way up the bayou.

My stepfather spoke French and English, like the rest of his generation of Cajuns. He also worked in the oil industry, as did a great many Cajuns at that time. My relationship with Charlie was, to put it nicely, strained, but he did take me to visit two oil rigs. He was a toolpusher, the rig boss, the guy who coordinated the drilling operations on the rig, so he could get away with bringing kids onboard.

My first visit to an oil rig was during Christmas 1973. At the time Charlie worked for Penrod Drilling Company, and his rig, #50, was “stacked.” That is, it had been brought in from the Gulf of Mexico to the port in Cameron for maintenance. After being hoisted by a crane at least 50 feet up on a small, open platform, we spent several days on the rig. I even drew a picture of that rig, which later won second place in an art show.

A few years later, Charlie took me and a friend to an onshore rig. It was out in the marshes of south Louisiana, and this one was drilling. The “roughnecks,” the guys who actually get their hands dirty, were grinding through the rock with the drill and continually adding lengths of pipe to the drill string as the bit advanced. 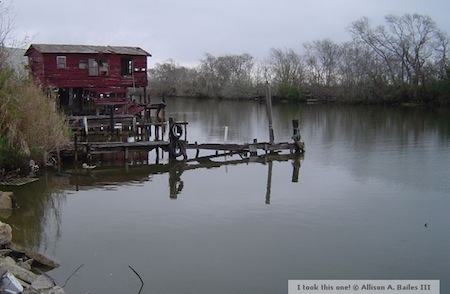 Getting oil out of the ground is a bit more complex than it’s portrayed in old movies. We’re long past the age of gushers, when all we had to do was poke a hole in the ground in the right place and then catch the oil that exploded up through the hole and filled barrels faster than we could put them in place.

A young oilfield maintains enough natural pressure to force oil up the wells drilled into it. As the field ages, however, the pressure diminishes. Injection wells help to keep the pressure up—and the oil flowing—by injecting water beneath or on the flanks of the oil column. Sometimes the gas that comes out with the oil is reinjected for this purpose too. Over time, the water finds its way into the wells and eventually ends their production.

In Texas and Louisiana, I grew up in the heart of the American oil industry. I saw rigs, pipelines, refineries, and pumping stations spread across the landscape. When I moved there in 1971, Louisiana was producing more oil than it ever had—or ever would again. By the time I left Louisiana in 1983, far fewer Cajuns were working in the oil industry, and the economy of the state was devastated. 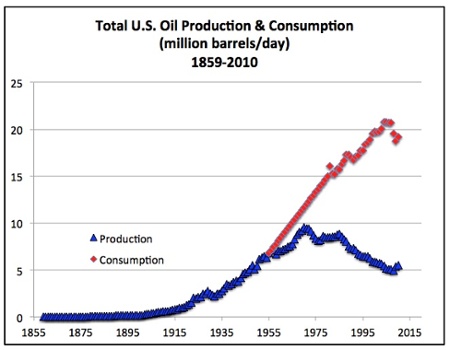 The world is now at or near its peak oil production. We've been stuck at 85 to 87 million barrels per day since late 2004. What happens when global oil supplies start their relentless decline? The US and about 50 other oil-producing countries are in decline now. When the world’s oil output starts decreasing year after year, will we be ready? We can’t import oil from the Moon. 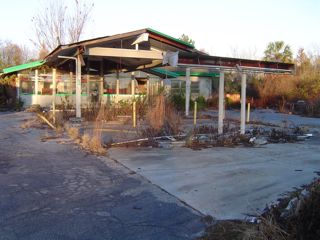 Energy Independence Is a Fantasy - Let's Focus on Energy Security

Nice story. I too grew up with parents in the oil industry, and what hit my family hard was the oil embargo fiasco. Almost 3 generations of my family lost jobs. That was around that time too.

Kinda puts today's problems into perspective, with relation to jobs.

There is an answer to what is going to happen. The world price of oil is going to be bid up until Americans see it as too expensive, and cut their usage by supply and demand mechanisms. It is Americans who use so much per capita, and other countries' citizens who want/need to use more as their standard of living rises.

I grew up in Louisiana and when I got out of high school, 1972 went to work on a drillin rig. to make a long story short in 1981 I was livin in Wyoming and was a driller on one those rigs. Over the next 5 years the off again and on again world of oil field almost put me in the poor house! That is what has put me in the business i'm in today in a round about way. I really love what I do, but I will tell you that we are along way from running out of oil or natural gas for that matter. That doesn't change the fact that the USA needs to really take a long look at the waste of our natural resourses, especially in the heating and cooling of the residental and commercial buildings we live and work in! Now that the government has gotten into the weatherization and oil business some of the stuff {the majority of it} I'm seein' ain't helpin the cause at all!!!I think I should stop typing now because my granddaddy always said "If ya can't say somethin' good, Don't say nothin' at all." This thing could get real political real quick. SEE YA

We have oil to last hundreds of years. We have natural gas to last even longer. It's time we use our own resources instead of buying it from duplicitous foreign sovereignties.

Chris C.: The oil industry has been full of boom-and-bust cycles since the very beginning. Many people have made and lost fortunes in short order, and then there are the many workers who make a living for a while and then have to look for other work or wait till they get hired in the oil industry again.

M. Johnson: Yes, the price has already gone up tremendously just in the past 7 years. It won't be long before we have no choice but to make changes.

Mike: I agree that oil and gas will last a lot longer. It's not the amount in the ground that matters, though. It's how fast we can get it out and bring it to market that governs how much of it we use and what the price is. Regarding your statement about efficiency, I totally agree. If you're new to the EV blog, check out our other articles, and you'll see that I'm constantly pointing out how much better things could be, especially, as you say, in heating and cooling buildings.

Jack: Yes, I think you're right. The problem is that, although oil and gas are still going to be around for a long time, we're at the point now where the amount we get each year is about to start dropping. Sadly, the idea that we can make up the difference by drilling more of "our own resources" is what's duplicitous. Energy independence is a fantasy.

Things are a little less nervous if we remind ourselves that "oil shortage" is not the same as "energy shortage" like they told us in the 1970's. We can get bulk energy at a livable price from several alternative sources. What oil is uniquely valuable for, as far as I can tell, is liquid fuel for vehicles. The energy density and liquid form make it preferable to any existing alternatives. That's the way I see it so far.

Does anyone know about how much of crude is devoted to plastics, insulation, asphalt and other non-fuel applications? Hopefully it's a small percentage since these more permanent uses seems to touch every aspect of our economy.

Bill S.: Yep, oil has been a boom-and-bust business since the beginning.

David B.: I don't know the answer to that, but it is relatively small. The part we burn touches nearly every aspect of the global economy, too, though.