Are You a Building Science Geek, Nerd, Dork, or Dweeb?

I hear a lot of people call themselves building science geeks, energy nerds, home performance dorks, HVAC dweebs, weatherization wonks, and policy poindexters. (It's true! Some of them are imaginary people in my mind and some are aliens, but they really do say that.) What I see, though, is that most such people seem to throw these words around without understanding which is which and how dorks and nerds and geeks and dweebs differ.

(We'll ignore eccentrics, boffins, anoraks, swotters, wonks, poindexters, and others of the sort because anyone who is anyone in the world where such things matter knows that those terms carry no weight. (Well, maybe wonk does. (And it would take a grammar wonk to tell if I've nested these parentheses correctly after all.) (But who cares about such silly things as nested parentheses, especially at 1:47 am?)))

A while back I saw this snarky article by Great White Snark that clearly showed the difference between nerds, geeks, dorks, and dweebs in a nifty Venn diagram, like the one below. 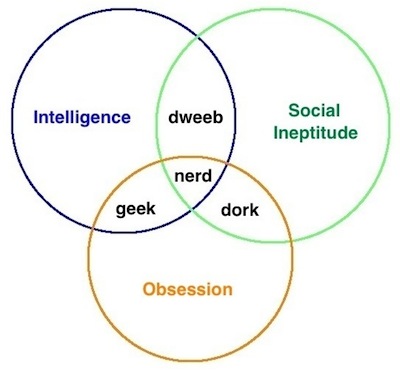 When I first saw this, I realized why I always take offense when someone calls me a dork. It also validated (at least in my mind) my perception that a nerd is a geek with glasses. My own assessment of where I fit in has always been geek. And yes, the mighty Venn (diagram, that is) confirms that my intelligence and obsession combined with absolutely no hint of social ineptitude puts me squarely in the geek camp. (You believe that, right?)

Hold on there, buster, cries another voice from the interwebs. According to OkCupid's Nerd, Geek, or Dork Test, these three terms are defined this way:

A Nerd is someone who is passionate about learning/being smart/academia.

A Geek is someone who is passionate about some particular area or subject, often an obscure or difficult one.

A Dork is someone who has difficulty with common social expectations/interactions.

Yes, I took their 60 question test. They happen to think I'm 70% nerd, 43% geek, and 22% dork. Hmmmm. I'm not sure I like that (except the low dork score). Dr. Seuss, who invented the word 'nerd' after all, thought they were something to be caught and put in the zoo.

It seems that I have my work cut out for me. I wrote a little about the geek issue last year in my post, I Don't Need No Stinkin' Building Science Summer Camp! But we're going to have to come up with some clear-cut definitions for the building science world. We'll probably have to start with the elder statesmen and stateswomen in the field — Joe Lstiburek, Gary Nelson, Linda Wiggington et al. Of course, Martin Holladay has already staked out his turf by calling his blog Musings of an Energy Nerd. But is he correct? Is he really a nerd?

What we need to do is develop our own metrics to determine if one is a nerd, geek, dweeb, or dork in the world of building science. I'm gonna go get my HP 15C now and do some calculations in reverse Polish notation. I'll get back to you with my results. It might take a while, though, because I'll probably have to run some regression analyses, maybe use some of Michael Blasnik's modified box plots, and definitely throw in some log-log 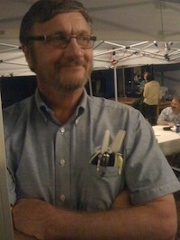 graphs (unless it turns out not to be a power law relation, but that'll put us back to square one).

In the meantime, I urge you all to think carefully about which of these you might be. If only it were as easy as saying, Oh, you wear a pocket protector so you must be a dweeb. Well, at least then we'd know what label to ascribe to Dr. Ed Voytovich (shown at the 2011 Building Science Summer Camp). Since it's not, however, we'll just have to wait until I get my algorithms worked out.

Photo at top by Andrew Kudrin from flickr.com, used under a Creative Commons license.

Forget getting the algorithm perfect, hurry up and lock in the idea & you could become the next Klout for the Energy or Green fields

Congrats you are almost a nerd as you have shed these dweeb traits, but your geek quotient is raising

HUH? Wata he said? Must b a homey.

I've always been a math and computation geek who's ever seeking out new problem areas to apply these skills. Today, it's home energy and building science; tomorrow, it'll be something else!
Also, according to @AlexandraFunFit, I actually do possess some modicum of social skills, so hopefully that means I'm in the "geek" intersection of your Venn diagram/Trinitas Rings chart thingy up there. :-)

This post really isn't complete without XKCD's Venn Diagram of Geeks and Nerds: http://xkcd.com/747/ . I thought for sure you would have included that one.

Hahah. Thanks for clarifying that.

Let me know when you have those calculations figured out so I can review them.

I used to have a Geek Code in my signature, too. I just can't believe that 1994 counts as "back in the day" for me, somehow.

Nerdy D.: Yeah, one of the best World Series games ever kept me up late, so I decided to run with it.

Sean: Brilliant! We've gotta do it.

Catherine: Did you take the OkCupid quiz?

Ben K.: Oh, that XKCD Venn diagram is totally flawed. I think they just made it up.

I keep hearing that I'm a ASSHOLE in the energy world. Where exactly does that fit into the equation? I did not see that definition. Maybe I'm just not good at communication and need to talk more.

I couldnt stand this concept all bottled up. I just started a micro course on how to get more geeky.

There are a few points missing from your otherwise mathematical Venn-ness:
1. You forgot to mention anything about the women who totally elevate your status just by agreeing to be seen with you. Where is the diagram for having social skills/status conferred upon you?
2. If John Poole is "claiming" that I said he has a modicum (is that a technical math term?) of social skills, does that mean all his skills disappear if I recant said claim? By inference, am I then the "Decider"?
3. If you look in the mirror each day only to ascertain whether or not you need a haircut or to wipe toothpaste off your face, and never to see if you look handsome or not, does that make you a dork, nerd or dweeb?
Essentially what I'm saying, Allison, is that you need to do a full series. You will need to get some MAJOR input from your wife, if only to prove the social skills claim!

Now, when I look in the mirror each morning, I smile, wink, and shoot a finger pistol at my reflection. Still check for toothpaste, but doing all that other stuff makes it far less obvious. Alexandra: This is more or less what you're suggesting, right??? :-P

Dear John, I shall leave it to Allison's devoted readers to answer whether that makes you cool or fully entrenched in the Dweeb or Dork category. One bit of info that will help them decide - do you blow fake smoke from your finger pistol?

I agree, you are a geek. Pretty sure Ed is too. Please stay there, us nerds need good cops as much as you geeks need us bad cops. ;-). ~Ted