A few years ago, a student of mine told a funny story in a home energy rater class. He was an HVAC contractor and said he was installing a new air conditioner for an elderly woman. As he was explaining things to her, he mentioned that they would be installing a 4 ton unit. "Oh, my," she said. "How are you going to get something so big into my backyard?"

The confusion here is completely natural. HVAC and home energy pros find this story funny because when you say an air conditioner is 4 tons, we know it's not weight. It's a number that tells how much heat the air conditioner can remove from the house in an hour. (Let's ignore the issues of nominal vs. actual capacity and AHRI de-rating.) A 4 ton air conditioner is one that can remove 48,000 BTUs of heat per hour from the house. For most people, though, 4 tons means 8000 pounds. (A BTU is a British Thermal Unit, approximately the amount of heat you get from burning one kitchen match all the way down.)

Most pros also know how such a common term as 'ton' turned into a bit of HVAC jargon. Before Willis Carrier invented the modern air conditioner, people used to cool buildings in the summertime with ice harvested from rivers and lakes in the wintertime. A Green Homes America article quotes ice production figures from the 19th century Ice and Refrigeration journal, indicating that the 1890 crop from the Hudson River was about 4 million tons. 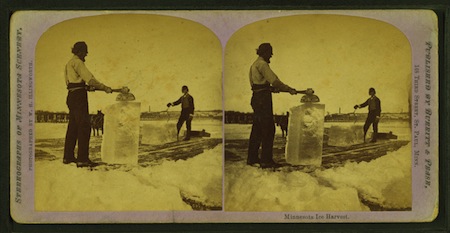 OK, so people used to cool and refrigerate with ice. How does that equate to air conditioning capacity in BTUs per hour, you ask? Well, let's get quantitative and find out. 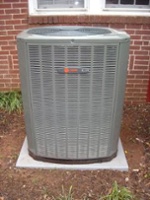 That's actually a lot of heat to pump into a pound frozen water. Once the ice is melted into liquid water, it takes only 1 BTU per pound to raise the temperature 1 degree. So if you've got a pound of ice at 32° F, you put 143 BTUs into it to melt it completely. Then it takes only 180 more BTUs to raise the temperature of that pound of water from 32° F to 212° F, the boiling point. 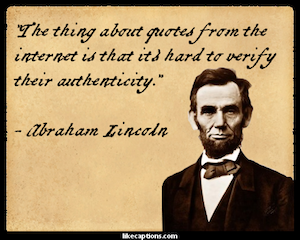 If you're wondering how this term got institutionalized, it was probably the usual way. People in the industry start using it, and then the professional organizations make it official. An architecture website has a quote from 1912 that claims the American Society of Mechanical Engineers standardized it. It sounds likely, but their numbers don't work out, so I'm gonna go with Honest Abe on this one and remain skeptical.

For the fearless: If you want to read some funny HVAC banter on this topic, check out this thread in the HVAC-Talk forum. And if you figure out what 'heat of zaporization' is, let me know!

The Magic of Cold, Part 1 - How Your Air Conditioner Works

It's Called an Air Conditioner — Not an Air Cooler!

Bless you, Allison for bringing unanticipated joy to my day! I laughed out loud about Abe's quote and the credits! Canterbury Tales, Indeed - and I thought it was from Homer's Iliad!

Rob G.: And bless you, too! I thought not a single person would notice Chaucer in there. I also laughed out loud.

Hmm... and just when I thought you were going to demystify nominal capacity vs. AHRI capacity vs. design capacity.

David B.: Hey, I did mention that issue here! It's on my list to cover.

Yes, that's exactly what I was referring to when I said, "their numbers don't work out." Thanks for that link to an original source from 1920. The discussion of whether to use 143.5 or 144 BTU/lb for the latent heat of fusion of ice is pretty nerdy stuff.

Very Interesting! Thanks. What I am having a hard time understanding...and maybe it's because I didn't read closely enough or I just don't have the brain capacity to figure it out...but why if the whole thing came from a ton of ice melting in a 24 hour period...which would mean 12,000 BTUs per hour, do we refer to a ton of HVAC capacity as only 12,000 BTUs and not 188,000 BTUs which is where the ton of ice is?

grusso: You ask a great question, and it's not because of lack of brain power on your part that this doesn't make sense. It's because of laziness on the part of a lot people who talk. It happens for the same reason that builders and other folks who work with areas all the time say a house is '2500 feet' when they really mean it's 2500 square feet. A ton of AC capacity, as you (almost) correctly state, is 288,000 BTUs, sort of. But it's a rate, not a quantity, and a ton of AC capacity has been defined as 288,000 BTUs melting over 24 hours, or 12,000 BTUs per hour. Without the 'per hour' in there, it looks like a quantity, but it's really a rate.

Expanding a bit further on grusso's question... when folks had to physically handle their energy source around (e.g., ice), a daily metric seemed appropriate, e.g, tons of ice a day. So in that sense, tons of ice was also a rate. But when automatic energy conversion systems like compressors entered the scene, engineers standardized on hourly rates, pretty much across the board.

Yo, Alison. Yeah, you did mention nominal capacity, etc... just to say "Let's ignore..." I'll be looking for your blog on that subject.

What is ton in AC..plz explin details..

Thank you very much, it was very helpful....

Good explanation...although...you can see more explanation about the rating of air conditioner in ton...here..
http://www.electricaltechnology.org/2014/02/why-AC-rated-in-Tons-Not-in-...

@Engr Stev: The formula to convert to kW on your website is incomplete. It leaves out the the AC's efficiency (EER), which varies with indoor and outdoor temperature, indoor RH, and airflow.

Enjoyed the post, Chaucer included. Made me wonder exactly how the cooling worked, so I started looking and found that new buildings are also implementing ice cooling systems ! Fascinating..
http://home.howstuffworks.com/green-living/ice-block-ac.htm