One of the fundamental principles of building science is that buildings must be suited to their climate. When they're not, problems can ensue. Maybe it's just that they're not as efficient as they should be. Maybe it's worse. Put plastic between the drywall and framing of your exterior walls in Ottawa, and it can help control vapor drive from the interior air and its associated moisture problems (rare in all but except in extremely cold climates). Put that plastic in the same place in Georgia, and you're going to rot the walls. 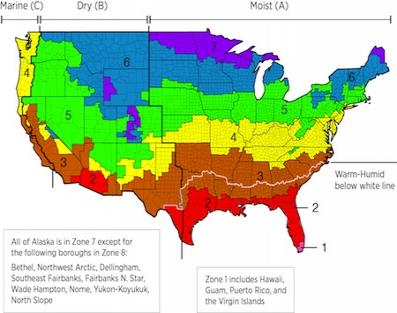 The number of each zone tells you how warm or cold it is. I wrote above that temperature is the parameter, but that's not a full description, of course. It's not just how cold or how hot the place gets. It's based on accumulated temperature calculations called degree days. Basically, degree days combine the amount of time and the temperature difference below some base temperature. 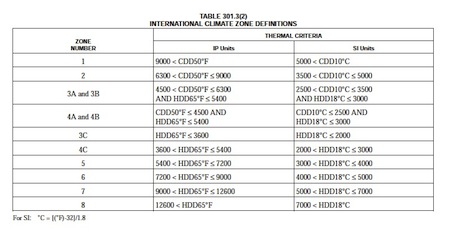 Notice that the IECC map also shows how moisture impacts the climate zones. Generally, it's moist to the east, dry to the west, and marine along the West Coast. I remember driving across Texas, from west to east, in the summer of '88 and feeling the humidity hit us when we crossed that black line. At the time I had no idea what that big black line was when we drove over it, but now it's clear.

Actually, there's a 4th moisture division shown on the map. Notice the white line going horizontally across the Southeast. It divides the eastern, moist side of the US into moist and moister, basically. This division isn't based on precipitation, though. It's based on humidity. A climate zone is called warm-humid if the wet bulb temperature is:

It's all in the IECC

Wherever you read building science, you're likely to run into someone talking about climate zones, and if you don't know the exact definitions, it can be a bit confusing. Now you've got my little summary here, but you can always get yourself a copy of the IECC as well. Most states are still on the 2009 version. Maryland and Illinois have moved up to the tougher 2012 already. The climate zone definitions are the same in both versions. In addition to the basic definitions above, the IECC also tells you county-by-county what the local climate zone is.

† The International Code Council is based in the US and, like the World Series, has little foothold outside our borders. Although the IECC climate zone map here shows only the US, you can use the definitions of the climate zones for any location in the world. For example, most of Canada is in climate zone 70. Just kidding. Most Canadians probably live in climate zones 5 and 6. By looking up heating degree days on degreedays.net, I found the following: Climate Zone 4C - Vancouver; CZ 5A - Toronto; CZ 6A - Ottawa, Montreal, Quebec; CZ 7B - Calgary.

How does a consumer find HVAC dealers who understand this information and how it determines the best system design? I live very near that white line between humid and swampy, and we struggle to keep the indoor humidity below 50%. Throw in allergies and one compromised immune system and you have potential for disaster. I'm looking at ventilating dehumidifiers, knowing that I'll have to learn everything I can in order to teach my contractor & HVAC guy. If you know any good HVAC contractors in central AL, please let me know.

How do we convince HVAC contractors that a 40-50k furnace (smallest you can buy) is sufficient to heat just about any house in climate zone 1, 2, or 3?

Pls help. We live in northern virginia and we have so opinions on wether to have jsut a heat pump or add a secondary heat source, propane.