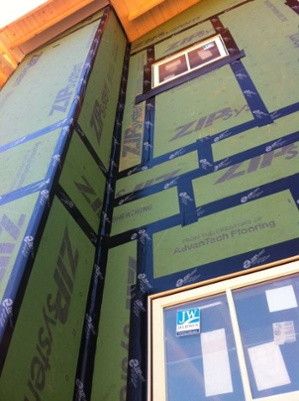 Are you ready to take the next step in being a building enclosure control freak? You already know about the 4 types of control layers, so let’s go further now and look at the one that controls liquid water. But why should you care? All you gotta do is throw some housewrap on that sucker, right?

Controlling liquid water happens to be one of the most important things a house has to do if it wants to live a long, healthy life. Of course, the house doesn’t really care because it’s not a sentient being, but the occupants care because they want to stay dry and not breathe mold. The owners care because they don’t want to spend money to fix things that should last longer. And the builder should care because callbacks can get expensive, especially when it means replacing parts of the house.

Drain the rain on the plane
If you want to save cash, flash
Don’t be a dope, slope
And if you don’t have a roof, poof.

OK, so maybe it’s a good thing he kept his day job, but it does get the point across.

Behind the cladding of walls is where a house either succeeds or fails in its quest to keep water out. That’s where one the materials that drains the rain on the plane goes. Now, what do we call that material? Depends on whom you ask.

Drainage plane – I use this term more than the others. I like it because the word drainage helps make it clear what the primary role of the material is.

Water control layer – This is the term that Dr. Joe is partial to. He likes it because it’s more inclusive. Mass walls, for example, don’t control water only by draining it; they store it and release it, too. I want to use this one. I really do. Maybe it’s just habit, but drainage plane seems to roll off my tongue better than water control layer.

Water resistant barrier (WRB) – You see this one a lot because it’s in the building codes. I’m not crazy about it. Oh, and sometimes the W stands for weather and the R for resistive.

Dr. Joe wrote a nice article about vocabulary back in 2009. Reading it will help you understand the issues better. And in case you haven’t learned yet, his footnotes are required reading.

OK, let’s get into those 6 different water control layer materials I promised in the title. To keep this article more focused, I’m going to discuss walls only here.

Some people think house wrap is a vapor barrier. Some think it’s the air barrier. Really, though, its main job is to drain liquid water that gets behind the cladding. It’s a water control layer, one of several materials you can use for that purpose but the one you see most often in residential construction. Housewrap can do a great job of controlling liquid water that gets behind the cladding. It also can be an adequate air barrier, although it’s usually not. Even when it’s installed perfectly, though, it works better to control air movement in one direction than the other.

Housewraps have come a long way since they were first introduced. (See Alex Wilson’s article, What’s New with Water-Resistive Barriers?) In addition to a variety of materials, housewrap now comes with different textures (‘crinkled’ or bumpy) and with other materials adhered to them. Benjamin Obdyke sells two of them: HydroGap, a bumpy housewrap to aid drainage, and HomeSlicker, a mesh adhered that you can get adhered to housewrap to allow venting behind the cladding. (Vented rainscreens and drainable housewraps will be the subject of an upcoming article for you Building Enclosure Control Freaks, so stay tuned.)

There’s nothing wrong with going old-school and using the materials your grandfather used. Asphalt-saturated felt or Grade D building paper can work well to control liquid water. I used felt on the green home that I built back in 2001, and you can see it in the photo here.

Another interesting tidbit is the naming of felt. You’ll hear people refer to 15 pound felt or 30 pound felt. That’s so old-school it doesn’t exist anymore. Now we have #15 and #30 felt. It used to be that 15 pound felt weighed 15 pounds per square (100 square feet). Number 15 felt, however, might weigh only half of that, depending on the manufacturer.

In the end, either felt or building paper can work as your water control layer.

You can read more about the distinctions between building paper and felt at the Fortifiber website and in Martin Holladay’s typically thorough article, All About Water-Resistive Barriers.

If you don’t know what this product is by name yet, you may well have already seen it. I’m seeing it more and more on new homes. If you see a home under construction and the outside is covered with what looks like green plywood, that’s Zip System sheathing. It’s oriented strand board (OSB) that has a special membrane adhered to the wood at the factory. It resists liquid water but is vapor permeable so it’s a great water control layer. The seams have to be sealed to complete the wate control layer, and that’s what the black stripes are in the photo above. Zip comes with its own tape, which has been tested and shown to work really well. Of course, as with so many aspects of construction, installation is key. It doesn’t stick well to dirt.

Made by Huber Engineered Woods, this product has another advantage: Taped sheathing is an excellent air control layer. (Disclosure: I did some work for Huber on the airtightness of their Zip sheathing. They also are one of the first advertisers in the Energy Vanguard Blog. Yes, you’ll start seeing ads here soon.) In 2011, I did a little research project with them, which you can read about in my article, Does Your Air Barrier Work in Both Directions?

Not that long ago, Huber introduced a variant of their Zip wall sheathing that comes bonded to polyisocyanurate foam insulation. It’s called R-sheathing, and you can get it in R-3 or R-6 thicknesses.

Similar to Zip sheathing, foamboard can be used as both sheathing and water control layer. As with Zip, you have to tape the seams. The photo below shows foamboard sheathing with a taped seam on a house at Serenbe. (Notice the wood furring strips on the short side, which will be part of the vented rainscreen.) With green builders leading the way, more homes are getting exterior insulation. Energy codes are starting to require it as well, so if you’re already using foamboard on the outside, you don’t need to cover it with housewrap. Tape the seams, flash the openings, and your rain will drain off the plane.

Life is never really that simple, though, so do your homework. Sometimes foam shrinks (as Dr. Joe found out the hard way), and if that happens, there goes your iron-clad defense against water. Well, actually there is no iron-clad defense against water. Over the lifetime of a house, water will get into many of the places where you’d rather it not go. That’s when a home’s ability to dry becomes important. Anyway, see this Green Building Advisor article about using foamboard as your water control layer to learn more.

This one is still rare. I saw the house below also at Serenbe on the same day I saw the house with foamboard. The black color you see there isn’t the cladding. That’s the liquid-applied membrane that will serve as the air and water control layers. It’s similar to the Zip product but it’s applied in the field rather than in the factory. If you’re worried about tape, this may be something you’ll like since it forms a continuous layer. The builder wasn’t around the day I was there, but I’m pretty sure the product used here is EnviroDri made by Tremco.

The final one of the 6 materials is the only one that has a really low vapor permeance. Delta Dry is a high density polyethylene with a permeance of 0.385, so it would be classified as a Class II vapor retarder in the International Residential Code (IRC). Still, it allows the wall assembly behind it to be able to dry to outdoors because it’s ventilated.

One issue with Delta Dry is that although it can be used as your water control layer, you may have to convince your building department to let you do that. Apparently it hasn’t gotten code approval to be used as a water control layer by itself, so you might have to install housewrap first and then the Delta Dry. According to their website: “It also provides excellent performance if installed in lieu of a conventional WRB, where building authorities allow this type of application.”

Understanding the properties and purposes of all these materials can be a full time job, if you let it. The main thing is to know that these materials are meant to control liquid water. They can also control air flow, some better than others, but their primary job is to drain the rain on the plane and keep a house dry.

If you think that a water control layer is optional, as the builder of this failed home in Kentucky did, you’ll pay.