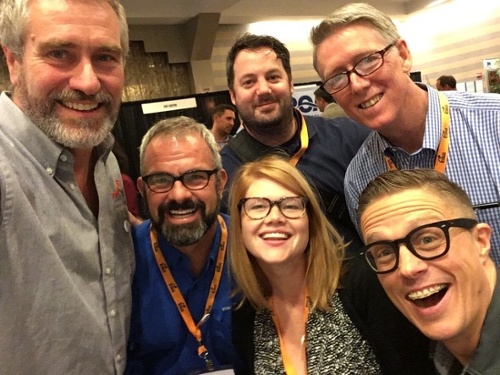 Yesterday I returned home from the North American Passive House Conference. It was great, as it always is. Wait. No, this was the best one yet. On the 10th anniversary of the first conference, PHIUS put on an amazing conference. It was the biggest one ever, I believe. As I flew home I pondered some of the things I heard and saw in Philadelphia and here are few that stood out for me.

Yesterday I returned home from the North American Passive House Conference. It was great, as it always is. Wait. No, this was the best one yet. On the 10th anniversary of the first conference, PHIUS put on an amazing conference. It was the biggest one ever, I believe. As I flew home I pondered some of the things I heard and saw in Philadelphia and here are few that stood out for me.

The people who go to the conference are doing amazing work!

One of the absolute best things about this conference is the people. They’re out there pushing construction methods that are parsecs beyond typical construction, but they also leave good programs like ENERGY STAR in a trail of dust. They’re building great buildings and doing “unfunded research” (Marc Rosenbaum’s term) to see how they can make them even better. They’re looking abroad to see what products or techniques can raise their buildings another couple of notches. And they share all this stuff at the conference and are fun to hang out with, too!

In the first breakout session, Prudence Ferreira showed the results of a WUFI modeling study. She looked at a bunch of different wall assemblies in different climates, comparing cellulose to other insulation materials. One of her conclusions concerns the famed hygric buffering of cellulose, the property of absorbing and storing moisture when things are wet and then releasing it when it dries out with the effect of preventing moisture damage to framing materials. She found that it works in Salt Lake City, a dry climate. In wetter places, not so much. Now we need some good studies with real assemblies to understand this better.

Joe gave the technical keynote on Saturday and spoke about making the Perfect Wall even more perfect. His earlier versions of the Perfect Wall relied mainly on screwing rigid insulation to the outside of the structure or using closed cell spray foam. His new version is what I wrote about previously when he was calling it his ideal double-stud wall.

Prefab house construction is getting better

After attending the NAPHN Passive House conference in New York, I wrote about the prefab Passive Houses being offered by Richard Pedranti and Chris Corson. They were both at the Philly conference, with a booth in the trade show and also as members of a panel on prefab high performance housing.

Also on the panel were Alan Gibson, Adam Cohen, and Tedd Benson. There’s a lot of really exciting stuff happening in this arena, and I hope it really takes off. Building houses completely onsite just doesn’t make a lot of sense.

The photo above is from Adam Cohen’s company, BuildSmart, which makes prefab housing Lego style. Some companies sell whole boxes (modular) that you connect onsite. Some sell panels, and that’s basically what BuildSmart does. Above you can see a corner section (behind an insulated footing sample). You can look at the assemblies they offer, which come insulated, air-sealed, and flashed, and design a house that can fit their standard components. Cool!

A new through-wall dehumidifier is on the market. Therma-Stor (full disclosure: They advertise here) has just introduced a new through-wall 30 pint per day dehumidifier. The target market is apartments, condos, and other small spaces in humid climates. Often these small spaces don’t get dehumidified by the air conditioning systems, especially now with better insulation and air sealing. These through-wall units solve the problem, and they do it more quietly and efficiently than the standalone dehumidifiers you can buy at the big box stores. And they save space, too.

David Holtzclaw gave an interesting talk on different methods of calculating heating and cooling loads. Great stuff! I’ll write more about the full presentation later, but the one thing that stuck out to me the most was that one of the methods came up with a latent cooling load attributed to the windows. He said he called to ask what that was about and was told it might have something to do with condensation.

It seems to be just a weird artifact of the calculation method.

The Passive House Alliance US (PHAUS) hosted a closing party at a nearby bowling alley on Saturday night. I liked to bowl when I was in high school and then did more when I was in grad school. I used to be pretty decent at it. Similar story with ping pong. I bowled a couple of games and found that doing it only once in the last 20 years isn’t frequent enough to keep my skills sharp. Then I played ping pong, which I haven’t really done in over 30 years. I was even worse there.

It was still a lot of fun, though. If you missed the conference this year, you really missed out. You really don’t want to miss it next year, though. It’s going to be in…