I like to tell people I'm a recovering academic. The truth is, though, that I haven't left physics behind. That would be impossible since I've been making a career in the world of building science. So, today I'm going to delve into that subset of building science called building physics as we take a look at the physics of water in porous materials. You'll also learn about the fourth state of water, the one that's not liquid, not solid, and not vapor.

But fear not! I'm going to do all this with a lot of images, and I won't include a single equation (although there's a link to one if you're brave enough to look).

The polar nature of the water molecule

Let's begin with the water molecule. One oxygen, two hydrogens, bonded together covalently. That means each hydrogen shares its one electron with the oxygen atom and both atoms get to complete their outer shells by doing so. 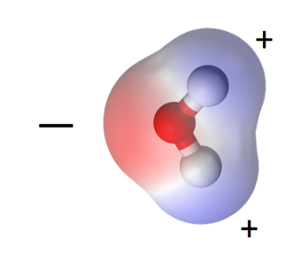 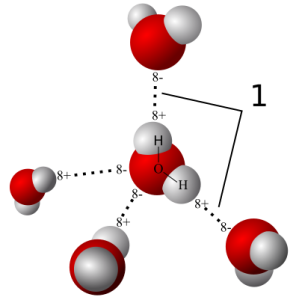 One consequence of water's polarity is that it is a liquid at higher temperatures than similar molecules. Carbon dioxide, for example, is a linear, nonpolar molecule and becomes a gas at about -71° F (-57° C). If water were like carbon dioxide, the oceans would not be here. Mountains would have no snow. And I wouldn't be writing this because we humans would not exist, at least not in the form we have now.

The polarity of water molecules means that when you put it in contact with another material, what happens depends on which attraction is stronger: water for itself or water for the other material.

When the source is liquid water

Now it's time to recall the Second Law of Thermodynamics: Water moves from wet to dry areas. If a porous material has one end sitting in water, the pores, or capillaries, will begin filling with water. The movement of water through capillaries depends on how hydrophilic, or wettable, a surface is and on how small the capillary is. The smaller the capillary, the higher the water can rise in it, as you see below. 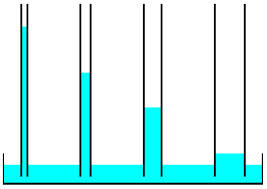 The photo at the top of the article illustrates perfectly how water can move from the ground into the porous concrete and concrete block. It's not uncommon for moisture problems in attics to originate with a wet foundation.

The photo of bricks below shows the capillary rise of water over time. After a bit more than an hour, the water is three-quarters of the way up the brick. 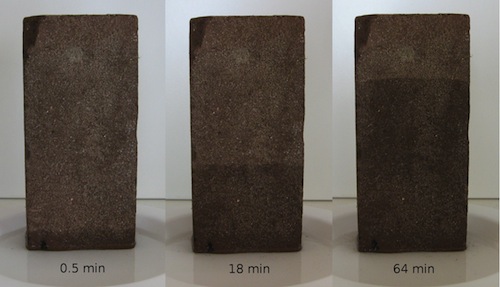 How high can the water rise? I said at the beginning I was going to do this article without equations, so I'll just tell you that there is one you can use to calculate the height a column of water can rise in a capillary. It depends directly on how wettable the surface is and inversely on the radius of the capillary, the density of the water, and the acceleration due to gravity. (If you want to see the equation, go to the Wikipedia page on capillary action and look for the section titled "Height of a meniscus.")

When the source is water vapor

Liquid is easy. Things start getting fun when we take a look at what happens when water vapor interacts with porous materials. If you have such a material (drywall, wood, concrete, cellulose...) with humid air on one side, water vapor will find its way into the pores. If the material is hydrophilic, water vapor will start sticking to it.

And then we start using a new word. When the surface pulls water out of the air like this, we call it hygroscopic. The material is hygroscopic, and we also say that it has hygroscopic water on the surface. 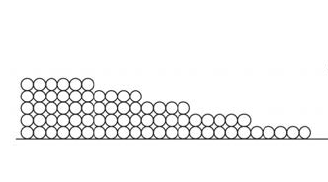 Another word you need to know here is "adsorbed." Those monolayers of water that stick to the surface are the fourth state of water. Here's why.

When that first monolayer of water molecules begins sticking to the surface, it does so with gusto. Remember, we're talking about hygroscopic materials that can pull water vapor from the surrounding space. They really like each other!

That attraction can be put in terms of energy. Recall that the energy absorbed or emitted when water boils or condenses is called the latent heat of vaporization. When water vapor adsorbs onto a surface (or breaks free of that adsorption), there's a latent heat of adsorption involved.

What that means is that the adsorbed water really is different from the other three states. It's obviously not vapor. It's not ice either. It's most similar to liquid water, but it's not as free to move as liquid because it's bound more strongly to the surface than it is to the surrounding water molecules. Only when you get more than five monolayers do you see it beginning to act like liquid water.

There you have it. You now understand some really interesting building physics...without being a scientist or academic, practicing or in recovery. Tomorrow, we'll take it a step further and look at the three moisture transport mechanisms, sorption isotherms, and yes, even aliens drinking beer. You won't want to miss that!

The main source I used for this article was chapter 3 of Professor Chris Timusk's doctoral thesis (pdf). Most of the rest came from Dr. Joseph Lstiburek's presentations on building science fundamentals and hygrothermal analysis, Wikipedia, and Bill Rose's book, Water in Buildings.

#1 from Building America page on capillary breaks. #2, #3, & #6 from Wikimedia Commons. #4 from doctoral thesis of Professor Chris Timusk (pdf). #5 from Stone Initiatives & Materials Testing Group. #7 by Energy Vanguard. #8 from Building Science Corporation. #9 is a modification of #8 from BSC.

I admire your clarity of description and explanation. You're a natural teacher ... disguised, of course, as a recovering physicist and building science swami.

You explain things so beautifully, Allison. Thank you for your wonderful blog!

Water in Buildings is on my birthday wishlist.

great article, as a novice it was a great learning tool for me.

Great article! You'd mentioned in our class that when we speak of "condensing surfaces" inside wall assemblies, we're actually referring to adsorption.

My question: Is the term "condensation" synonymous with "adsorption" or are there subtle, technical differences between the two terms?

Leigha D.: You shouldn't have to wait that long...unless your birthday is tomorrow!

John P.: They're not really the same, although nearly everyone uses that way, even the pros who say they're different. It's hard not to use the terminology that everyone else uses. Technically, condensation occurs on a impermeable surface like glass or metal. There, the water all just collects on the outer surface. With sorption, the water collects on all the surfaces, outer and inner.

You explain things so beautifully, Allison. Thank you for your wonderful blog!

great article, as a novice it was a great learning tool for me.

As usual, nature, in the form of Namib desert beetles, already discovered one of the principles you describe. And the little critters didn't even need a degree in physics ??.

Rachel K.: Thanks! I have to make it simple so I can understand it myself.

What the beetles discovered